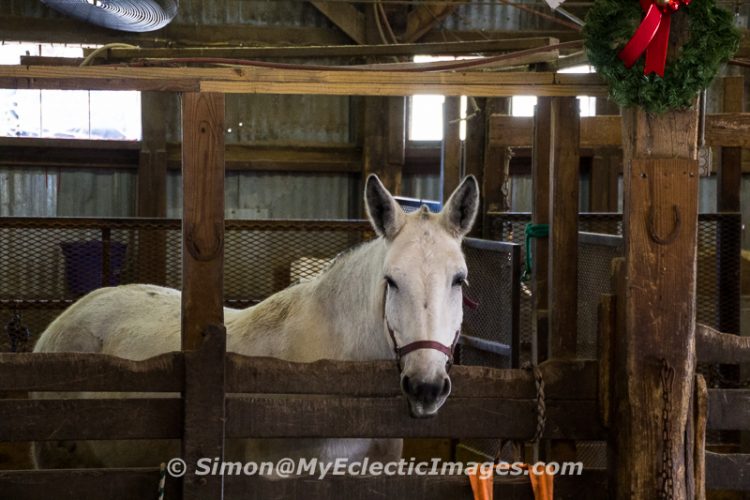 A Laid Back way to See a Charming City

Charleston, SC is one of my favorite cities on the planet. Between the historic buildings, fresh seafood and ever-present ghosts, I can’t seem to get enough of this sophisticated southern town. We have toured Charleston by bus, on foot and on our last visit in December, 2015, by mule and carriage. That adventure, courtesy of Palmetto Carriage, added a boost to Charleston’s already huge WOW factor.

As we settled in the carriage, along with about a dozen of our fellow tourists, we were offered blankets to keep away the chill. Mark, our driver and guide, introduced us to Hit and Run, the mule team who were assigned to pull our carriage through the streets of Charleston’s Residential Historic District. Other fun examples of teams include names like Laverne and Shirley and Thelma and Louise.

Inside the Palmetto Carriage Works Barn in Charleston, SC (©simon@myeclecticimages.com)

One unique feature of this tour is that you’re not sure which of three areas of Charleston will be assigned to your carriage by a simple, yet effective, selection system involving red, yellow and blue balls. We drew the blue, and we were off.

Facts About the Palmetto Carriage Works in Charleston, SC (©simon@myeclecticimages.com)

Mark began with a brief history of Charleston. If high school history had been taught with his amusing and informative manner, I might have paid more attention in class instead of mooning over the Beatles.

Charleston was claimed in the name of England’s King Charles II in 1670, when the first British ship landed. Since then, this enchanting city has thrived, seen hard times during the Revolutionary and Civil Wars and survived both a devastating fire and a major earthquake.

As we clip-clopped past old homes, churches and businesses, Mark pointed out significant historic landmarks. Spinning his tales – interspersed with humorous personal stories – their unique contribution to Charleston’s historic landscape was brought to life.

From the oldest graveyard in South Carolina, established in 1685, to the Unitarian Meeting House built in 1772, the determination of Charleston’s inhabitants to preserve the past was apparent. In fact, the 75 Year Preservation Law prohibits alteration of the exterior of structures 75 years old or older. You can do anything you like on the inside, but the outside must maintain it’s original characteristics.

Charleston’s commitment to historic preservation has led to some clever structure recycling. The 215-year-old jail and lunatic asylum, closed in 1939, is now the American College of Building Arts.

One of Marks most fascinating stories concerned the fire of 1861, the first year of the Civil War. There were few men left in Charleston to fight the accidental outbreak, which grew into an inferno that burned for 29 hours. The fire blazed a wide path of destruction before it was finally stopped by the Ashley River. You can see Modern city blocks amid the historic streets, which outline the burned area. Follow the path of the fire by traveling the newer streets.

Arriving Back at the Palmetto Carriage Works Barn in Charleston, SC (©simon@myeclecticimages.com)

The hour-long tour isn’t anywhere near enough to do even this confined area of Charleston justice, but it left us with a strong desire to explore farther on our own. No matter how many times I return to Charleston, I know without a doubt there will be new WOWs to be discovered.

Palmetto Carriage Works is the oldest carriage tour operator in Charleston and is located at:

Although we were guests of Palmetto Carriage, all opinions are entirely my own.