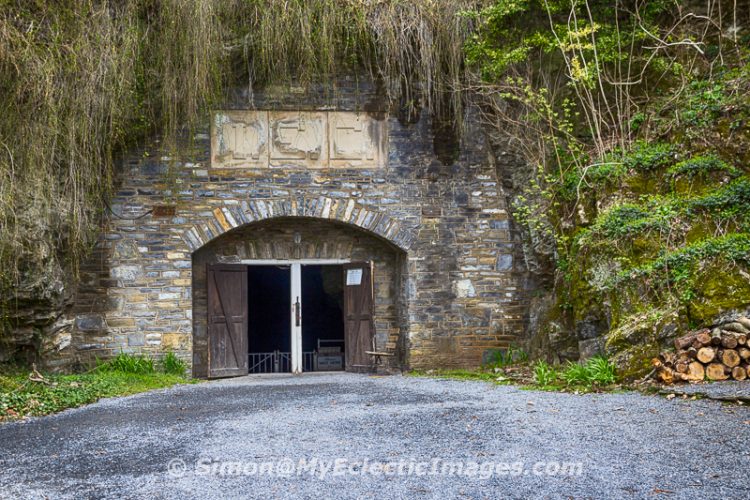 Let Your Tour Guide and Your Imagination show You the way.

The children on the tour were definitely getting into the spirit. “I see a mushroom,” called one.

“I always called him a cave man,” mused our guide, but I’ll have to remember that one.” And so continued the identification of images perceived in the rock formations on the Wall of Imagination in Indian Echo Caverns. This chamber was one of many WOWs we would encounter during our 45-minute saunter through a fascinating array of history, geology and lore.

The 440 million year old limestone caverns are a popular attraction located near Hershey, PA, and make for a pleasant family outing. But it wasn’t only the kids who were enjoying the experience. The one being who didn’t seem to be having fun was Otto. His guide work was impeccable, but he displayed obvious displeasure at the drops of water that plopped down on him from the ceiling.

“Get over it,” I told him. “It’s supposed to bring us luck.” At least that was one of the yarns spun by our guide. “If it falls on your head,” he said, “it means you’ll have one year of good luck. If it falls on your nose, it’s seven years.” Since water also dropped on my shoulders, hands and neck, I wondered if I had just acquired a lifetime of fortune.

Our tour began at the entrance of the caverns, which lay at the bottom of 71 stairs. Although there is no physical evidence to confirm this, it is believed that Susquehannock Indians used the caverns as shelter from severe weather, and because of it’s constant temperature of 52 degrees, as a place to store food supplies.

Near the entrance of the caverns, there are what appear to be smoke stains on the wall, and if you look carefully, there is an Indian painting of a man holding a torch. Simon looked very carefully, but saw nothing of the kind, nor did some of our fellow tourists. But with a little imagination, anything is possible.

Next, we ventured into what is known as the Indian Ballroom, a large chamber where the Eastern and Northern Caverns intersect at right angles. There we saw both stalagmites (growing down from the ceiling) and stalactites (protruding from the cavern floor) formations. A stalagmite in the center of the room had what appeared to be a smily face on top is called the guardian angel. A large stalactite looked like an ear of corn. Then there was the pillar created when “tite” and “mite” grew toward each other, one inch every 150 years, until they met and married, so to speak. This natural wonder is believed to be between one and two million years old.

It is possible the Susquehannocks used this area for ceremonies, if they actually ventured this deep into the caverns. All we can do is guess, because the tribe vanished in the 1670s.

Our guide took us into the Eastern Cavern and turned out the lights for a few seconds. We were immediately plunged into total blackness. He then lit three dim lanterns similar to those used by early explorers of the caverns. This anemic illumination was all they had, and, needless to say, there was no shortage of mishaps as a result.

Today, the caverns are lit by over 1,700 lights. If there is a power outage, a generator will insure uninterrupted illumination. No doubt, far fewer calamities would have befallen the early explorers had they been in possession of even a fraction of this light.

Unlike the Susquehannocks, who would not have disturbed the caverns, these explorers had no awareness of the fragility of million plus year old formations. They left considerable damage in their wake. In their effort to learn. the explorers did no favors to the natural integrity of the caverns by breaking off souvenirs to take home. Too bad they didn’t have the option of plaster stalagmites made in China.

Of course, exploration of the caverns was, for the most part, a positive exercise. Many of the explorers left behind carvings of names, initials and dates in the rock, which can be seen throughout the caverns.

Up to this point, the caverns were interesting, but not exactly WOW material. However the underground pools, the Blue room, The Rainbow Room and the Wedding Chapel had an eery beauty that made the entire tour a unique experience.

This was where our guide kicked the myths, tall tales and ghost stories into high gear. From how a giant’s footprint on the ceiling of the Blue Room, to the ghost of a native American man holding the severed head of a white man with a white beard who allegedly haunted the Rainbow Room, we were all enthralled.

The last chamber on our tour was Wilson’s Cavern, and the story of how it acquired its name is a tragic one.

In the early 19th century, William Wilson’s sister, Elizabeth was convicted of murdering her twin infants, and was sentenced to death. William was able to obtain a pardon for Elizabeth based on new evidence. Riding back to save his sister, William encountered one delay after another, and arrived just over 20 minutes to late to prevent the hanging.

So distraught was William, he chose to spend the last 19 years of his life, between 1802 and 1821 as a hermit in his own cavern. He spoke to no one, and only emerged long enough to work on a farm to earn what little money he needed to survive.

William lived, cooked his meals, read his bible by candle light and eventually died at 56 in his cavern. You can see where William slept on a stone shelf reached by climbing a rope ladder.

Indian Echo Caverns were first commercialized in 1929. In 1952, the 80 acre farm, which included the caverns, was purchased by a family whose descendants still operate the business.

I would describe the tour as fascinating, informative and just plain fun. Our guide played to his audience of youngsters as if he was born to it, and I couldn’t help regretting never having taken our boys to the caverns when they were children. They would have been WOWed just like their parents. Of course, if we had grandchildren (ahum-ahum), we could at least make up for our oversight by WOWing them.

Do underground caves spook you? Would you venture outside your comfort zone to visit Indian Echo Caverns? If so, let us know in the Comments.

You can find area and cavern maps on Indian Echoes’ website.

While in Pennsylvania, we were hosted by Visit Hershey-Harrisburg.