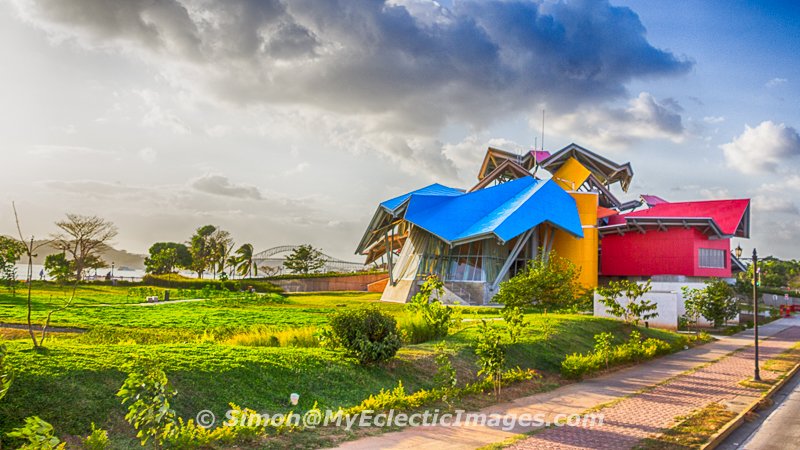 An Ecological and Architectural Wonderland.

If there’s anything I hate more than being cold and wet, it’s being hot and sticky. And as much as I love Panama City, it will envelop you an an overabundance of the latter year round. I confess that this was one of the reasons I looked forward to escaping the afternoon heat at the Biomuseo. But once inside, it was the museum itself and not the air conditioning that WOWed me to the core.

The Biomuseo is prominently located on the Amador Causeway where the Panama Canal safely deposits its continuously moving procession of ships and boats into the Pacific Ocean. The building’s bright blue, red, yellow and orange façade, as well as its unique shape, make it impossible to miss. Inside, you will be treated to 44,132-square feet of biodiversity depicting Panama’s eco-history since it emerged from the ocean floor over three million years ago. This event created a bridge joining South and North America. It stands to reason that permanent exhibits, housed in eight galleries, are collectively called the “Bridge of Life”.

Entrance to the Biomuseo (© simon@myeclecticimages.com)

We were incredibly fortunate to have been offered a personal guided tour by a charming and enthusiastic docent. But, while preparing to write this post, I discovered the recordings I made during nearly two hours in the Biomuseo would not play. I’ll spare you all the steps Simon and I took, and the expletives we uttered, in our vain attempt to get the recordings to cooperate,. Although I was able to cobble together our memories of our visit, as well as basic information and facts from my friend, Google, the name of our gracious and informative guide could not be recovered. But it was not difficult to recall how this young Panamanian woman demonstrated her respect for Panama’s natural history and her deep caring for the future of her country’s fragile ecology.

Part of the Colorful  Exterior of  the Biomuseo (© simon@myeclecticimages.com)

We began our tour in the expansive atrium, which was covered by a roof of metal components varying in shape. In one area of this covered but open air atrium, the floor upon which we stood was made of large translucent tiles, decorated with brightly colored letters. When we visited the exhibit area directly below the floor, we could look up at the underside of the glass, which added to the illumination of the space. This area connected the Biomuseo’s two main wings, and was called “The Human Path”.

The Covered but Open-Air Atrium of the Biomuseo (© simon@myeclecticimages.com)

The Translucent Floor of the Atrium Seen from the Human Path Exhibit Area (© simon@myeclecticimages.com)

The “Human Path” exhibit focused on man’s impact, from the first humans through Spain’s conquest of the region, to the building of the Panama Canal. The story was relayed chronologically on panels mounted on colorful columns.

As we entered the main museum, wooden plaques depicting scenes of nature in light relief and giant decoratively glass painted windows provided a spectacular view of the  Panama City skyline across the bay.

Wooden Plaques in the Entrance Way into the Biomuseo (© simon@myeclecticimages.com)

Painted Windows in the Entrance Way into the Biomuseo (© simon@myeclecticimages.com)

The eight permanent exhibits, five of which were complete at the time of our visit, were created by multidisciplinary designer, Bruce Mau, in collaboration with the Smithsonian Institute and the University of Panama. The focus of these exhibits is on the evolution of Panama’s role in transforming the biodiversity of not only North and South America, but the climate of the entire planet.

The Panamarama exhibit provided us with a sophisticated presentation of sights and sounds . From above, below and all around us, we were surrounded by 360 degree projections of Panama’s flora, fauna, beaches and jungles. Marine life swam lazily beneath our feet, and a tropical thunder storm raged around us from every direction.

As we were expertly guided through the galleries, we were accompanied by the sounds of animals, further emphasizing themes of nature and evolution. We saw fossils, life-size plaster animals, present and extinct, that could be touched, climbed upon and experienced, models of birds in flight suspended from the ceiling, and the skull of a now extinct giant sloth. The interactive nature of the exhibits made it an ideal learning environment for visitors of all ages.

World-renowned architect, Frank Gehry, designed the Biomuseo – his first structure in Latin America – the concept of which was conceived in 1999. His wife is Panamanian, so this project was especially close to his heart. So close in fact, the couple donated Gehry’s design to the people of Panama in 2004. The building was opened to the public in October, 2014, overdue and over budget, but magnificent nonetheless.

There is much to see and do in Panama’s capital, but if you are only visiting for a short time, don’t miss the Biomuseuo. Between the eye-popping colors, the sounds of nature, the unique and sensory-friendly exhibits and knowledgable staff, I promise you you will experience fifty shades of WOW!

Information, hours and ticket prices can be found on the Biomuseo’s official website.

Although we were guests of the Biomuseo, all opinions are entirely my own.