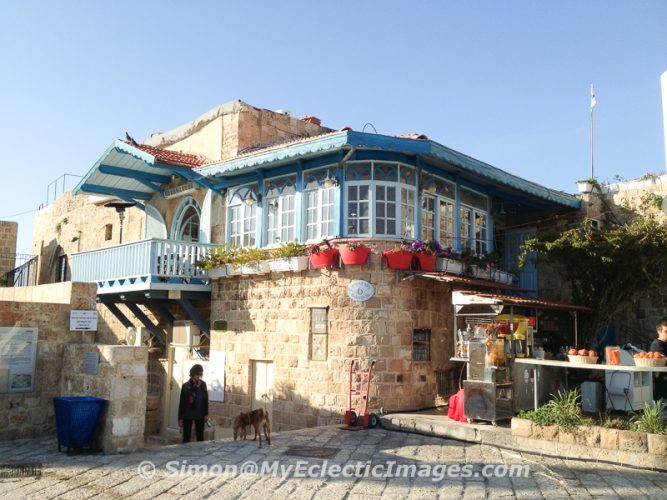 Take a lesson in Survival from this Ancient Port City.

As far back as I can remember, I’ve loved oranges, and growing up in a predominately Jewish neighborhood of Montreal, the Jaffa brand was a frequent guest in our house. For much of my life, I associated Jaffa with sweet, juicy oranges, but it wasn’t until I visited its namesake city that I experienced the real WOW that is Jaffa.

As Simon, Otto and I stood atop a hill overlooking the port on a sun-soaked afternoon breathing in the salt sea air we gazed out at the sparkling turquoise waters of the Mediterranean. From our vantage point, we could see the rock where, according to Greek mythology, Andromeda was left chained by a sea monster to drown with the incoming tide. Fortunately for our damsel in distress, her hero, Perseus, turned up just in time to rescue her from a watery demise.

Entry to the Harbor in Jaffa with Waves Breaking Over the Rock of Andromeda (©simon@myeclecticimages.com)

Jaffa has several biblical ties, as well. It was believed that the port was Jonah’s departure point for his rendezvous with the whale. And St. Peter was also believed to have walked upon this land.

According to actual historical evidence, Jaffa’s story can be traced back through time to the Bronze and Iron Ages. It’s history precedes the Egyptians, Muslims, Christians and Jews. In fact, Jaffa lays claim to being the oldest continually functioning port in the world.

View of the Waterfront in Jaffa (©simon@myeclecticimages.com)

Although Jaffa cannot accommodate modern passenger and commercial shipping, it still serves as a place where fisherman can make a living, and where small pleasure craft can find a safe haven.

Fishing Nets on the Dock in Jaffa Harbor (©simon@myeclecticimages.com)

Napoleon – the emperor, not the dessert – the Ottoman Empire, the British and many others once laid claim to this strategic port. Jaffa saw heavy fighting during Israel’s war of independence. But no matter how many times it was ravaged, burned, conquered and reconquered, Jaffa always managed to rise from the ashes of destruction to thrive again.

Although the city has a predominantly Arab population, no one can claim to own Jaffa. It is the diversity of cultures, architecture, and historical roots that make this city the wonder it is today.

In 1950, Tel Aviv and Jaffa were united to form the Tel Aviv-Yafo Municipality. This link with Israel’s former capitol makes for endless opportunities to learn, shop and enjoy the moment.

Modern Tel Aviv Seen from the Waterfront in Jaffa (©simon@myeclecticimages.com)

Walking through the city, we observed how the combination of old, new and restored combine to give Jaffa its exotic charm. Upscale shops and restaurants were scattered among older structures flaunting their ability to survived the ravages of weather and war. We delighted in the diverse assortment of small cafes, art galleries, souvenir shops, a run-down warehouse with a satellite dish, and to our surprise, several wedding parties posing for pictures. Considering these celebrations were taking place late on a Wednesday afternoon, one can only imagine the number of smiling brides to be seen on weekends. Run Down Warehouse on the Edge of Jaffa Harbor (©simon@myeclecticimages.com)

Bride and Groom Posing for Pictures in Old Jaffa (©simon@myeclecticimages.com)

Our only complaint was we didn’t have nearly enough time to explore Jaffa’s many facets. If I ever return to Israel, and I fervently hope I will, Jaffa will have a longer stretch of time to divulge many more of its WOWs.

If you are interested in Jaffa’s tumultuous, yet rich history, as well as all there is to see and do, this website will be an excellent start.