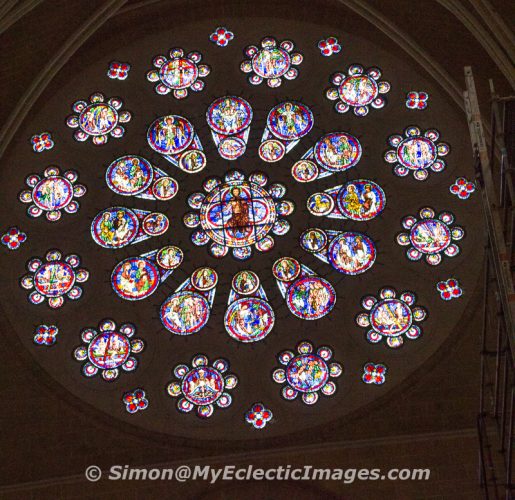 The Grand Dame of Medieval Churches Gets a Facelift.

When I first read the book, it was drier than day-old toast, but Henry Adams’s “Mont St. Michel and Chartres” made me want to get close to both these magnificent medieval religious structures. So, in the words of Forrest Gump, “That’s what I did.” Chartres was the first of the two places that Simon, Otto and I visited in June 2016, and it was even more of a WOW than I had expected.

Cathedral Notre-Dame de Chartres, as it is officially known, is located approximately 50 miles from Paris. The town of Chartres, itself is definitely worth a wander, as its medieval roots precede its most famous structure.

The North Side of the Cathedral and Adjacent Houses (©simon@myeclecticimages.com)

From the time we began drawing near to the cathedral, to the time we exited over two hours later, Chartres held us under its spell. From the two uneven spires, along with the stone carvings of gargoyles and religious figures on the church’s exterior, to the original sculptures and exquisite stained glass windows of its interior, we could easily understand why Chartres is considered one of the world’s greatest architectural achievements. Even more amazing is that it is so remarkably preserved, Chartres Cathedral opens a window into how its stunning design and fine detail must have appeared when it was originally built.

A Gargoyle on the North Spire (©simon@myeclecticimages.com)

Carvings Surrounding One of the Doors on the North Side of Chartres Cathedral (©simon@myeclecticimages.com)

Detail from a Stained Glass Window on the South Side of the Nave of Chartres Cathedral (©simon@myeclecticimages.com)

My first impression when we entered the cathedral was that of a vast chamber stretching out in all directions, which in the simplest sense it was. The 121 foot high. nave is the widest in France. If you stand at the western end, of the nave, you will have an unobstructed view 427-feet straight down to the east end where the stunning sight of the apse awaits you.

The High Alter Backed by a Marble Sculpture (©simon@myeclecticimages.com)

The Clustered columns seemed to soar into infinity, as they reached toward the pointed arches of the high ceiling. Back at the east end, of the cathedral, an intricately carved 16th century screen. divided off the choir. Detail from the Choir Screen (©simon@myeclecticimages.com)

For many, though, the most arresting aspect of Chartres is the glowing grandeur of the more than 150 13th, 14th and 15th century stained glass windows that spill their vivid colors throughout the cathedral. Surviving religious wars and Nazi occupation nearly completely intact, Chartres’s windows present the largest assembly of medieval stained glass in the world. Magnificent rose windows depict such biblical events as the Passion, Resurrection and Last Judgement. Many of the scenes in the stained glass are devoted to the Virgin Mary, as are a number of the cathedral’s sculptures.

Simon climbed a narrow winding staircase of over 300 steps to reach a breath-taking panoramic view of the cathedral’s roofline, the town of Chartres below and the Normandy countryside stretching out into the distance.

Staircase Leading Down from the Spire (©simon@myeclecticimages.com)

View from the Cathedral Spire Across the Roofline (©simon@myeclecticimages.com)

You could say that the third time was a charm for church builders at the site of Chartres Cathedral. Devastating fires in 1020 and 1194 nearly completely destroyed its predecessors. Following the second fire rebuilding began almost immediately with volunteers bringing stones from a quarry five miles away. A major portion of the cathedral was completed by 1220, and it was dedicated in 1250 with Louis IX and his family in attendance.

A Carved Figure on the North Spire (©simon@myeclecticimages.com)

A Carved Filial on the North Spire (©simon@myeclecticimages.com)

Chartres Cathedral was never looted or severely damaged, even during the chaos of the French Revolution. Since the early Middle Ages, Chartres has been a revered destination for pilgrims, and in 1979, was added to the list of UNESCO World Heritage sites.

When we visited the cathedral, it was more than halfway into a major restoration project, which began in 2007 and is projected to be completed by 2022. We saw men and women on scaffolding painstakingly scrubbing walls and columns by hand in an effort to bring them back to their original colors. No pressure washing for this task.

Part of the Choir Screen Showing a Comparison of Cleaned and Uncleaned StoneWork (©simon@myeclecticimages.com)

A huge controversy has been raging among architects, historians and archeologists regarding the methods used in the restoration, and whether it should have even been taken on in the first place. Stefan Evans, an American Gothic art specialist, went so far as to start a petition protesting the “Continuation of the Work” on the cathedral.

The difference between the cleaned portion of the church and the yet-to-be scrubbed area was startling. To use an old cliché, it was like the difference between day and night, with one part creamy white, and the other still bearing the dark gray patina brought on by centuries of dust, dirt, pollution and candle smoke.

I compared two of the columns. The one that had been cleaned had a slightly rough but even surface, while the restoration in-waiting had an uneven surface and felt dirty. From a visual perspective, the contrast was sharp.

A Comparison of Cleaned and Uncleaned Columns (©simon@myeclecticimages.com)

I’m no expert on architecture, but when adding up the history, construction and shear beauty of Chartres, it is a WOW that will continue to stand the test of time.

For cathedral hours, admission cost and in-depth descriptions of the cathedral, this website  has a wealth of information.

Phone: 02-37-21-59-08 – note if you are not on a French phone you will need to add the international dialing code (+33) and depending on your phone you may need to precede everything with an access code as well.