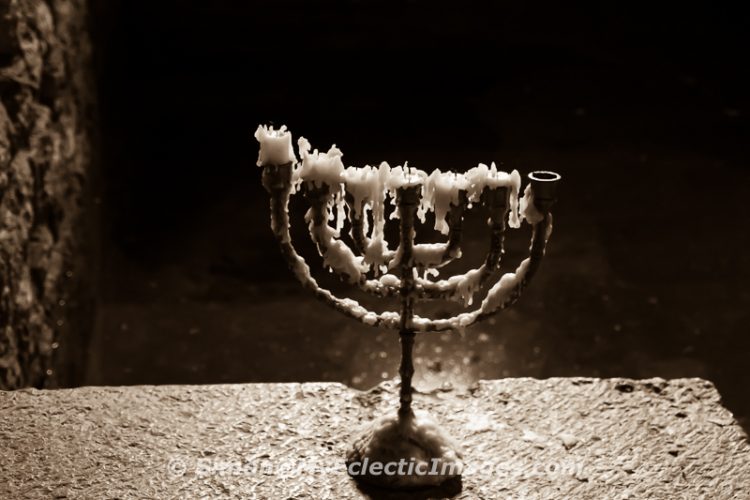 Ritual Bath Opens a Window on a Once-Thriving Jewish Community.

It was thirty-six stairs down from the square in Besalu’s Jewish Quarter into the 14th century ritual bath, known as a mikvah. With each step I noticed the air gradually cooling, as the daylight receded, giving way to illumination from two windows in the chamber. The atmosphere was heavy with tradition and tragedy, leading to a WOW of reverence.

Looking Across the Mikvah to the Entrance Stairway (©simon@myeclecticimages.com)

So, what is a mikvah? It is a ritual bath required by orthodox Jewish women to be taken for the purpose of purification before they are married, following the birth of a child and monthly after menstruation. The process involves total immersion in a cleansing pool containing water that flows from a natural source, such as a spring, river or from rain. The function of the mikvah was to cleanse the soul, therefore, the body must be clean before entering the pool.

A View of the Exterior Walls of the Mikvah in the Lower Right from the River Bed (©simon@myeclecticimages.com)

Although considered a requirement for women, it is not uncommon for devout men to purify themselves on every Friday prior to the beginning of the Sabbath.

Besalu’s mikvah has remained remarkably preserved since its construction in the 13th century in the Romanesque style. It was in use until the expulsion of Spain’s Jewish population by Ferdinand and Isabella in 1492. They may have funded Columbus’s voyage to the New World, but giving non-Christians the ultimatum to convert or leave, was certainly not this couple’s finest hour, and served as a precursor to the horrors of the Spanish Inquisition.

Ferdinand and Isabella’s reign of terror sought to expose and execute those who secretly practiced religions other than Catholicism, whether they were guilty of this heinous crime or not.

Many Jews openly converted, but continued their traditions behind closed doors. It is difficult to say if the mikvah in Besalu was used at the time of the Spanish Inquisition, but, based on its excellent condition, was a long-forgotten treasure until its accidental discovery in 1964.

The mikvah’s excellent state of preservation is most likely a result of the centuries-worth of river sand that filled it and kept the precious secret of its purpose hidden. The Inside of the Mikvah (©simon@myeclecticimages.com) The Inside of the Mikvah (©simon@myeclecticimages.com)

Once the sand had been cleared out, and the entire underground vault exposed, the mikvah has drawn millions of visitors from around the world. But the Jews now living in Besalu, this symbol of duty to tradition is a direct link to a past that preceded violent persecution.

Although I was born in Israel, and raised in a Jewish home, the thought of going to a mikvah at any time in my life would never have crossed my mind. My cynical self considered this tradition to be just one more way religion micro-manages people’s lives in order to maintain control over them. However, standing in a place where the devout came to cleanse their souls in accordance with orthodox Jewish law, I could feel only appreciation and respect. That alone is a WOW worth mentioning.

The Besalu mikvah, located in Catalonia’s Girona Province, is open to the public daily from 11:00 AM to 6:30 PM. No reservations are necessary, however, you must be accompanied by a guide, as the mikvah is kept under lock and key.

Disclaimer: Our visit to Girona was generously hosted by Patronat de Turisme Costa Brava, Girona with cooperation from Besalu Museu Obert. However, all opinions are entirely my own.