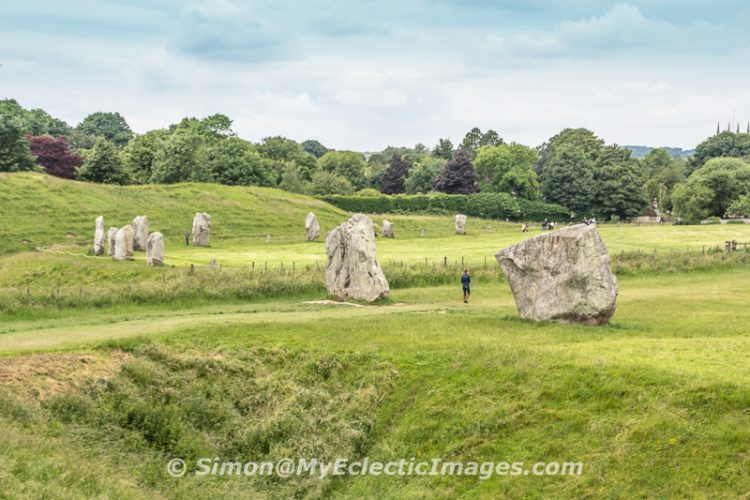 Teachable, Touchable Stones that are Anything But Ordinary.

“If you like Stonehenge, Avebury will blow you away.” It was this piece of advice, along with a chance meeting, that led us to a WOW of an experience.

Simon, Otto and I had just spent two extraordinary days in Wiltshire, and were on our way to Derby, when we made the decision to tempt the ever-present rain clouds and stop to have a look at Avebury circle. Although well worth it, our visit to Stonehenge the previous afternoon had left us saturated in every sense of the word, but we simply couldn’t help ourselves.

Almost immediately after entering the area of the outer circle, Otto decided to attempt to devour a discarded apple. Had we not had to stop in order to separate my chow hound from the forbidden fruit, Simon might not have noticed the couple engaged in what appeared to be praying at one of the ancient stones.

Finding Peace and Tranquility at a Sarsen Stone (©simon@myeclecticimages.com)

In fact, Jo and Ken were there to draw positive energy and peace from the stones and atmosphere of Avebury. Practicing Druids, this was a place where they often come when they need to, as Jo explained, “recharge”.

Although we spent less than a half hour speaking with this warm, serene couple, we continued on our way with a far deeper understanding of Avebury than we would have had we not chanced to meet them. What made this meeting even more significant was the opportunity to learn about Avebury directly from individuals whose ancestors once found tranquility and gave thanks, as Jo and Ken still do, amid these stone circles.

Avebury is home to the largest stone circle in the world. Older than Stonehenge, 20 miles to the south, this UNESCO World Heritage Site is located 90 miles west of London, in Wiltshire County. Although Stonehenge is strangely haunting in its stark beauty, We found Avebury to be a cut above its younger sister, and unlike Stonehenge, the stones are there for everyone to touch and admire intimately.

Part of the Main Circle at Avebury (©simon@myeclecticimages.com)

Avebury has been altered, ravaged, built upon and neglected throughout its more than 4,500-year history. Today, the outer circle, of giant sarsen stones interspersed with smaller, more irregular stones is 1,396 feet in diameter with a road running right through it. The stones lie inside a perimeter consisting of a ditch and a berm. There are four entrances at the north, south, east and west points. The circle encompasses 28 acres of land.

It is believed that the original outer circle, consisted of approximately 100 stones. Today, however, only 27 of these remain. Within this circle, are two smaller stone circles.

The sarsen stones, used to compose the circles range from nine to over twenty feet in height, and weigh in at approximately 40 tons. These mammoth stones were extracted from a quarry nearly two miles away. Somehow, the area inhabitants manage to move the stones – either by dragging them, or sledding them – to the Avebury site where they were erected and anchored between 6 and 24 inches deep, to form perfect circles.

Avebury has much yet to tell, but most of its secrets are still hidden beneath the ground, waiting to be unearth by slow and meticulous excavation. There are also numerous theories, and there are long descriptions of what is currently visible at Avebury. But as we walked within the circles, touched the stones and listened to birdsong accompanied by a haunting yet joyful tune played by a man with a hang drum, we were caught up in the sense of peace and reverence surrounding us. Even the sounds of road traffic seemed to recede the longer we stayed within the circles.

Jo believes gratitude to the elements that made crops grow was the driving force behind Avebury’s stone circles. Unlike Stonehenge, there were no remains found to indicate that this had been a burial site.

It was when she first moved to the area that Jo began delving into her family history. She told us that many things she remembered from her childhood suddenly began to fall into place, and that was when she realized her history lay in Pagan culture and beliefs. .

A commitment to the preservation of our planet, love of animals, simple living devoid of an obsession with material things and a healthy lifestyle were already part of who she was. Now Jo had a spiritual anchor that stretched back to the time of the Druids.

And so, Jo and Ken visit Avebury to obtain something they can get nowhere else. “The comfort that you get from coming here is immeasurable,” Jo explained.

Although Jo and Ken are technically Pagans, the very word still sends some people into a snit. “It’s as if they expect us to suddenly grow horns”, Jo chuckled, “So we always say ‘Druid’, because they understand Druid. It’s really very simple. There’s nothing cloudy about it.” Although Jo described their beliefs as being not very interesting, they are, in fact, both fascinating and beautiful in their simplicity compared to most other belief systems.

Jo and Ken are vegetarians, as are many Druids, because of their deep love of animals. They don’t drink, smoke or overuse medication. They are by no means judgmental of others. It is simply who they are, and it was a privilege to have met them.

When you find a site such as Avebury that exceeds your expectations, and meet people who enhance the experience tenfold, it becomes a true WOW among WOWs.

Disclaimer: We are most grateful to Visit Wiltshire and Littleton Lodge for their assistance in making our time in this beautiful, historic English county a true delight.