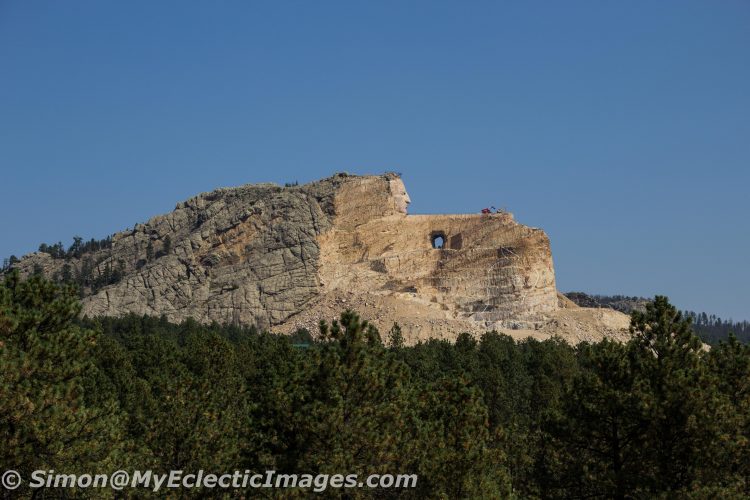 Phenomenal, Formidable and Far From Finished.

When I was a child, enormous, larger-than-life statues had the effect of totally freaking me out. I kid you not. To me, it seemed as if they would come alive and crush the life out of me in some way or other. Perhaps then, it’s a good thing I couldn’t actually see the 641 foot, long 563 foot tall behemoth that is slowly but surely becoming a memorial to Oglala Lakota leader and hero, Crazy Horse. The memorial, the story and the man were more than enough to WOW me.

View of Crazy Horse Memorial from the Visitors Center (©simon@myeclecticimages.com)

The Memorial to Crazy Horse, who is best known for handing General Custer his most stunning and final defeat at the Battle of the Little Bighorn in 1866, will be the tallest sculpture in the world when completed. Carved out of a mountain in South Dakota’s Black Hills, Crazy Horse is a long way away from done, but, considering the mammoth task at hand, what has already been accomplished since the first blast rocked the mountain in 1948, is nothing short of amazing. Add to this the awe-inspiring story of steadfast determination of three generations of one family to see the project completed, and you have the beginnings of a memorable experience.

The story began in 1939, when Henry Standing Bear, an Oglala Lakota Chief asked an award-winning sculptor named Korczak Ziolkowski to carve a memorial to Crazy Horse as a tribute to all North American Indians. At the time, the New England based Ziolkowski was in the Black Hills assisting Gutzon Borglum at Mount Rushmore  and turned down the project.

Returning from his service during WWII with a Silver Star and Purple Heart pinned to his uniform, Ziolkowiski realized he wanted to leave a lasting legacy. So, learning that Henry Standing Bear’s offer was still on the table, he made his way back to South Dakota’s Black Hills in May, 1947 – to begin what would become his passion and life’s work. The following June, the mountain rang with the first blast, as five survivors of the Battle of the Little Bighorn bore witness.

Ziolkowski married his wife, Ruth in 1950, and they produced 10 offspring. As soon as each of the five sons turned eight, he would begin working on the mountain. Today, although Korczak and Ruth are gone, six of their children and some of their 23 grandchildren continue the project through the Crazy Horse Memorial Foundation. Since no state or federal funds are used, completion of the memorial is totally dependent on donations, revenue from admission fees and other sales and the unwavering dedication of the Ziolkowski family.

When Simon, Otto and I arrived at the Welcome Center, we had the opportunity to see a small carving of what will some day be the completed sculpture. It shows Crazy Horse, proudly mounted on his horse, his hair flowing behind him and his hand stretched out in front, index finger pointing forward. “My lands are where my dead lie buried,” I could almost hear him say, as I ran my fingers over the details of the carving. Considering the suffering, humiliation and slaughter suffered by the Lakota at the hands of the “white man” I couldn’t help thinking a upward-pointing middle finger might have been more fitting. But, unlike yours truly, both Crazy Horse and Ziolkowski had far more class than that.

Back outside, we joined a group of fellow tourists on a short bus ride to within 1,000 feet of.the mountain’s base. As we drove, we learned about the Ziolkowski family and the processes used in transforming a mountain of granite and an assortment of minerals into a fitting tribute to a great man and his people.

Compared to the carved model, it may appear that not much has been accomplished in nearly eight decades. Although the face is complete, Crazy Horse’s flowing hair, single feather and horse are still mountain matter. The current phase of blasting and sculpting will soon expose the horse’s nose.

A Closer View of the Head of Crazy Horse (©simon@myeclecticimages.com)

The face, however, is so arresting, it’s easy to forget what has still to be done. Because Crazy Horse was adamant about not having his image reproduced, Ziolkowski had little choice but to improvise.

What we see today is a tan,colored, determined visage that has been made smooth by painstaking pealing of layers of granite.

You can take a bus ride up the mountain to the 267 foot long arm. The cost is $125.00 per person, and free for accompanying children. Although we were pressed for time, and couldn’t take the trip, the reputed spectacular view and the fact that $110.00 of the fee goes directly to the foundation as a donation, I would say the experience of standing face-to-face with Crazy Horse would have been well worth the price.

Crazy Horse Memorial from the Road to the Work Site (©simon@myeclecticimages.com)

Just to give you an idea of the enormity of the face alone, it is almost 90 feet tall, and all four of the faces on Mount Rushmore could fit inside Crazy Horse’s head. Despite what I said previously, it would be worth confronting those childhood fears just to see that face. And as if the accomplishment of carving that noble face from the face of a mountain isn’t enough, perhaps the true testament to the skill and attention to detail of the workers is that, in 67 years, there hasn’t been a single fatality.

Crazy Horse Memorial from the Road to the Work Site – a little closer (©simon@myeclecticimages.com)

Crazy Horse Memorial from the Road to the Work Site – even closer (©simon@myeclecticimages.com)

Upon our return from the base of the mountain, we wandered the complex and stopped for lunch at the Laughing Water Restaurant. Although not part of the complex run by the foundation, the owners have managed to provide good food at reasonable prices. I had a bison burger, which was well seasoned and not nearly as dry as others I’ve tried. Simon had a stew of vegetables, potatoes and bison meat, which he also enjoyed. Aside from producing good food and good value, the owners have shown much generosity in offering one complementary meal a day to the approximately 50 members of the complex staff.

Before leaving the complex, we had the opportunity to speak with Lauren Ebert, Director of Media Marketing and Public Relations. She generously took the time to tell us more about the various areas of the complex, as well as the Indian University of North America.

Since 2010, the university has been offering a summer program that gives graduating students first semester college credits. Students are primarily Native American from all areas of the country. Qualifying white students are also welcome.

You can take excellent photos of the Crazy Horse Memorial from quite a distance without having to pay the $22.00 admission fee, but you would be missing priceless experiences that will add depth and understanding.

A few of the highlights of our visit include:

You can take in the nightly lazar light show, or join hikers twice a year as they trek 6.2 miles to stand on Crazy Horse’s arm. In fact, make your visit to the Crazy Horse Memorial part of a visit to Rapid City and surrounding areas. The Black Hills have so much to offer, your entire family will have ample things to do and see that can be found nowhere else.

I’ve learned a great deal during the two-and-a-half years I’ve been a travel writer and blogger, and one of the most important take-aways from each destination is that you can’t do it all in one day. In order to really appreciate a town, historic site, museum or landscape, you have to spend time, revisit, rinse and repeat. No matter how many times I may be fortunate enough to return to the Crazy Horse Memorial, each WOW will be more powerful and have far more significance than the last.

During our stay in the area, we were hosted by the Rapid City Visitors and Convention Bureau, as well as the Crazy Horse Memorial Foundation. All opinions, however, are entirely my own.

The Crazy Horse Memorial is open year-round, but times and schedules may vary according to the seasons. The complex can accommodate people with disabilities and your well-behaved leashed pets are welcome in outdoor areas.

More in-depth information about the memorial, a live webcam showing the carving in real time , as well as passionate quotes from Crazy Horse, Henry Standing Bear and Korczak and Ruth Ziolkowski can be found on the official Crazy Horse website.