A Stunning Tribute in Stone to Four Presidents Who Helped Make America Great.

The only event Otto might remember about our visit to Mount Rushmore National Memorial Park is the mountain goat that nearly made a shish-kebab out of him. But for us, that, “WOW! That was close!”, was soon overshadowed by the WOW of a mammoth carving we had come to see in a South Dakota National Park. We made a point of paying tribute to this man-made marvel both artificially illuminated at night and bathed in warm sunlight by day, and urge you to do the same.

The ceremony illuminating the memorial was well worth the 18-mile drive from downtown Rapid City to Mount Rushmore. We had arrived at our hotel in the early evening, and it was a rush to get out there in time to catch the entire 45 minute event. 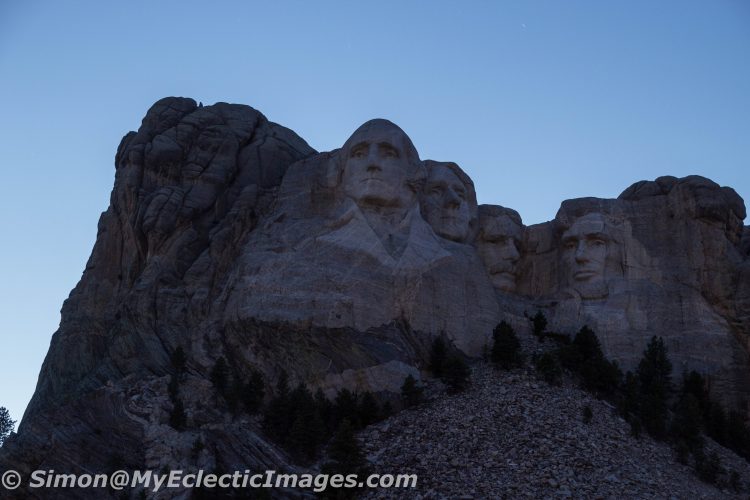 It was a pleasant walk in the mid-September twilight – except for the part where Otto spooked the goat and nearly got skewered – from where we parked to the Grand View Terrace, The upper gallery of the amphitheater, was already filled to capacity, so we, along with many others, elected to stand behind the terrace wall, where the view of the carving was stark and almost erie against the darkening sky.

The program began with a short talk by one of the park rangers, followed by a well-produced and moving video. Over a period of 20 minutes, we were given a brief glimpse of the memorial’s history and the four American Presidents who inspired it.

The memorial known as the Shrine of Democracy, bears the 60-foot carved faces of four of the most revered American presidents.: George Washington, Thomas Jefferson, Abraham Lincoln and Theodore Roosevelt. Their likenesses represent America’s birth, growth, development and preservation. 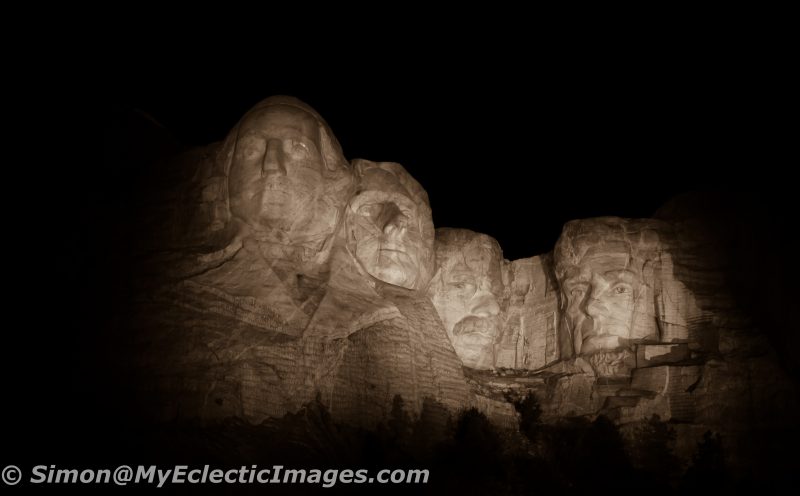 But the four presidential heads were not exactly what South Dakota’s state historian Don Robinson had in mind in the early 1920s, when he came up with an idea to increase tourism in the Black Hills region of the state. His vision involved carving the shapes of heroes of the West – Lewis and Clark, Red Cloud – into enormous pillars of natural granite known as “the Needles”.

Enter a familiar figure to regular readers of this blog, Gutzon Borglum who sculpted the stirring North Carolina State Monument at Gettysburg. Robinson contacted, the master sculptor in 1924 while he was in Atlanta, hard at work carving Confederate General Robert E. Lee into the solid granite of Stone Mountain. This was one of those situations where timing was everything. Robinson’s overture coincided with Borglum’s falling out with his employers. With this new opportunity, the sculptor picked up his tools, models and drawings to head west.

A passionate patriot, Borglum put forward the suggestion that the project would garner more national interest if the carving displayed giant likenesses of George Washington and Abraham Lincoln. Thomas Jefferson and Theodore Roosevelt were later added to the plans for the project. And on his second visit to the Black Hills, Borglum set his sights on Mount Rushmore as the location for his most daring accomplishment.

There were obstacles, however, and I’m not simply referring to the hundreds of thousands of tons of rock that would have to be removed. At the outset, the project faced opposition from environmentalists and area native populations. And then there was the issue of how this grand undertaking would be funded.

While President Calvin Coolidge took his summer vacation in nearby Custer State Park, he was wooed, and then convinced, to deliver the dedication speech at the Mount Rushmore sight on August 10, 1927. Carving began in October of the same year. Coolidge came through in 1929 with the signing of legislation to the tune of $250,000 in federal funding.

The project took 14 years to complete. In order to carve the four heads into the granite face of Mount Rushmore, Borglum employed what were for that time, new tools and techniques. Dynamite and pneumatic hammers were used to quickly and efficiently remove large amounts of rock. The 400 workers who wielded these powerful implements also used traditional drills and chisels to complete the more precise aspects of their task.

Each of the four presidential heads was dedicated upon completion. In 1939, Theodore Roosevelt’s likeness was dedicated by his fifth cousin, then President Franklin D. Roosevelt.

Although the carving of the heads was done, there was still a good amount of detailed work to be finished before the project could be called complete. But Gutzon Borglum would not live to see the culmination of his 14-year transformation of the mountain face. He died in March of 1941, leaving his son Lincoln to put the final touches on the Mount Rushmore monument. The carving was dedicated on October 31, 1941.

Here are a few more interesting and fun facts about Mount Rushmore:

The lighting ceremony concluded with everyone rising to sing the national Anthem, followed by a salute to members of the military in the audience and lowering of the flag. Then the park ranger threw a switch, and the entire carving suddenly was awash in white light against the sky’s blackness, exposing the faces of four of America’s greatest presidents in sharp relief.

Because we were in such a hurry when we arrived, we spent more time on our way out, enjoying a leisurely stroll along a road lined on either side with brightly colored flags representing each of our 50 states and six territories.

The following morning, we arrived early to get the best daytime photos of the memorial. Because the presidents are carved on the southeast face of the mountain, your best photo opportunities are before 10:00 AM.  Shots from many different angles and distances are possible including from the road approaching Mount Rushmore from Rapid City. There is also a spot just past the park entrance with an excellent view of George Washington’s profile. The entire area looks very different in sunlight, and this includes the corridor of flags. 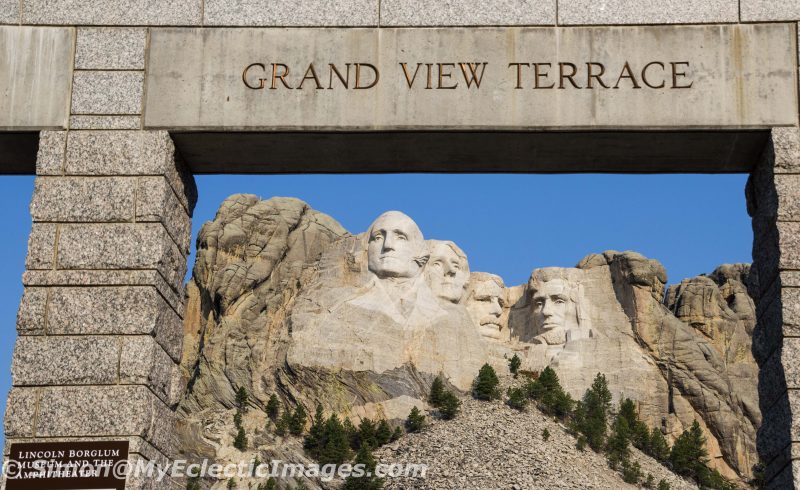 Before leaving the park, we visited the Sculptor’s Studio, which displayed some of Borglum’s tools, plaster models, and other exhibits explaining the master sculptor’s vision for the finished monument. 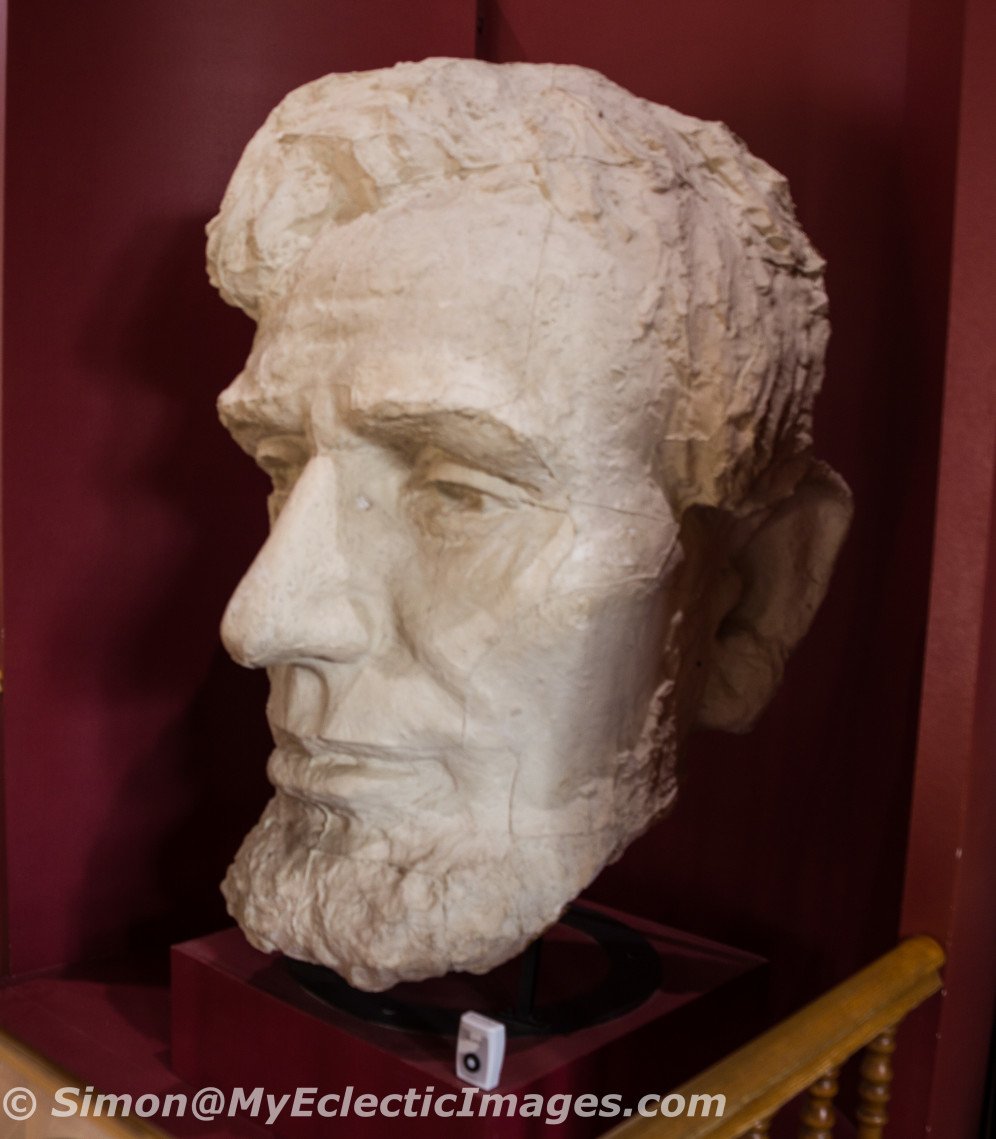 Borglum hung plaster masks of the presidents on cables to help guide the workers’ in fashioning their facial features. He instructed the men to close their eyes and use their fingers to feel the unique details of each face. By doing so, Borglum believed they would learn more about what they needed to do through their fingertips than their eyes alone could tell them.

It would have been ideal to explore the park for the rest of the day, but we were due at Crazy Horse State Park. So we made our way out, vowing to return and be WOWed all over again by the four great presidents and the man who immortalized them on the face of Mount Rushmore.

The park is Open year-round, and the Lighting Ceremony takes place every evening at dusk, May through September.

Learn more about the fascinating story of the Mount Rushmore National Memorial here.

During our stay in Rapid City, we were hosted by the Rapid City Convention and Visitors Bureau, however, all opinions are entirely my own.