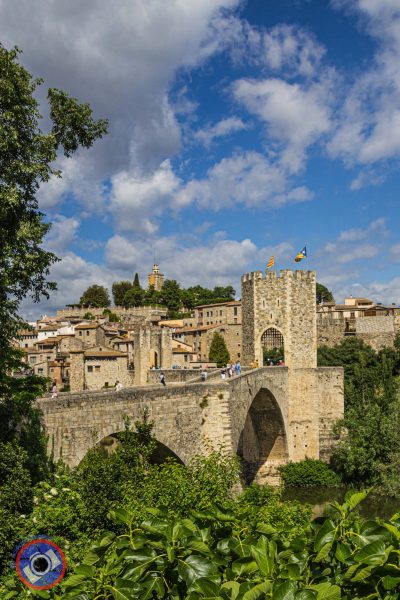 (This is the second installment in a new series, “The ABCs of Future Travel”, designed to inspire you to start planning your next trip.)

A visit to the town of Besalú is like a magical journey into the past. Located in the Northeast of Spain in the Catalonian province of Girona, Besalú is an absolute must-see when visiting the Costa Brava. A mixture of Roman, Jewish, and Christian structures, plus medieval churches, an imposing bridge, and a long-hidden Jewish ritual bath are only a few of the marvels waiting to be explored in Besalú. 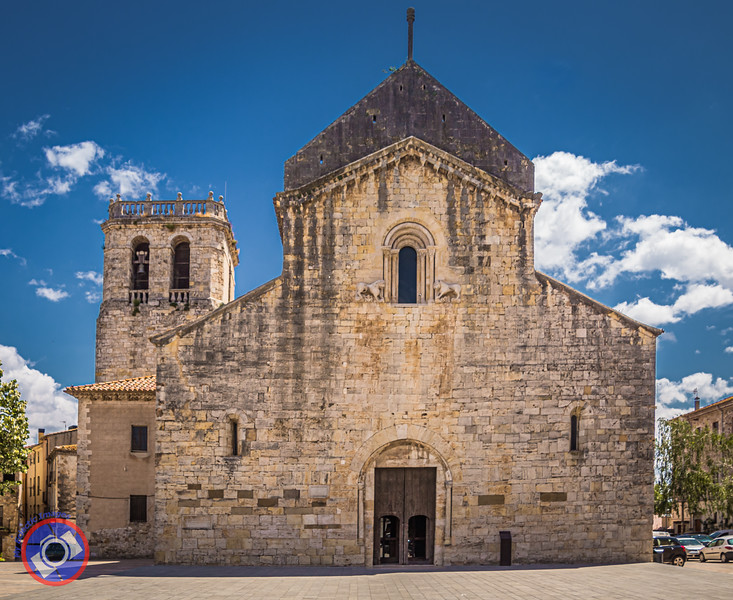 Designated a site of historical and artistic importance in 1966, Besalú can easily be explored in a few hours on a day trip from Girona 35 miles away. You can also take in the Dalí Museum in Figueres, 25 minutes from Besalú on the same day. And you would be 35 minutes from the coast, should you want a break from delving into medieval history.

Your introduction to the treasures of Besalú will most likely be the arresting view of its remarkably preserved medieval bridge. Allow yourself time to take in the unique aspects as you cross the River Fluvia into the narrow cobbled streets of Besalú’s old town. 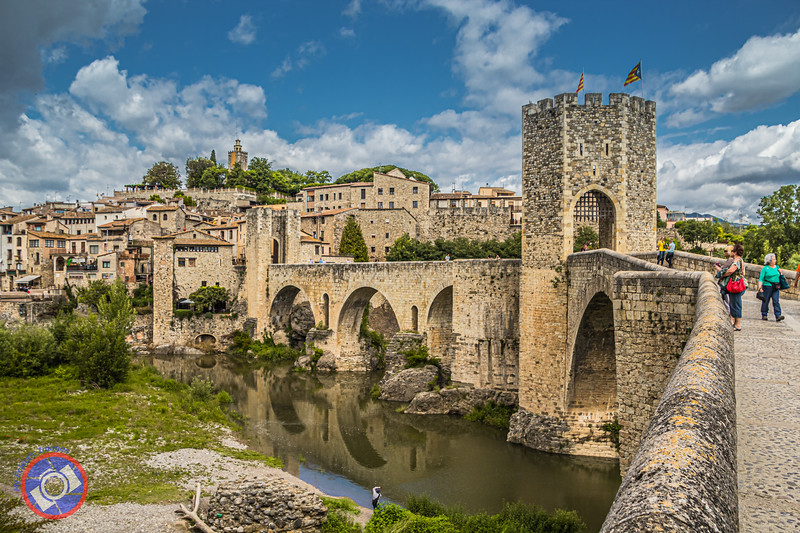 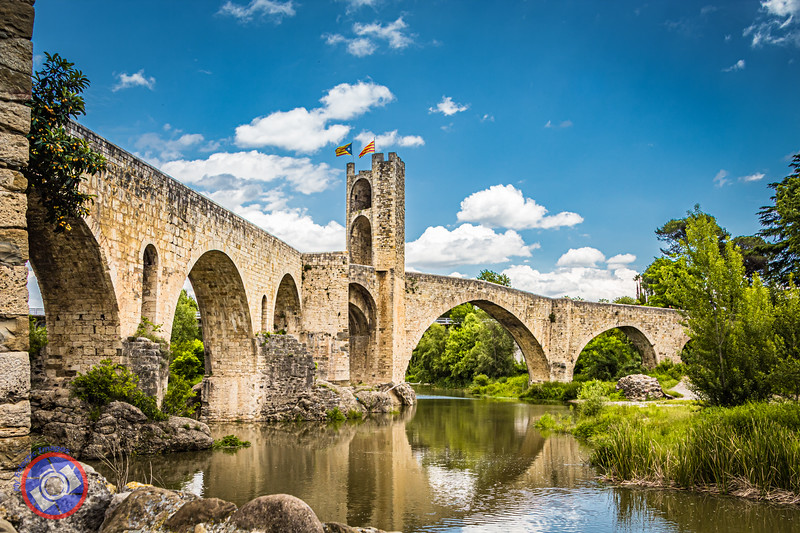 An Alternative View of the Medieval Bridge Crossing the River Fluvia in Besalu (©simon@myeclecticimages.com)

The bridge, constructed in the Romanesque style, dates back to the 12th century. This medieval marvel is endowed with seven arches, two towers, and a quirky bend. in the center, giving it somewhat of an “L” shape as opposed to a straight span. Photographers will have a field day capturing views from the bridge itself, the riverbank, and the town.

The Monastery of Sant Pere 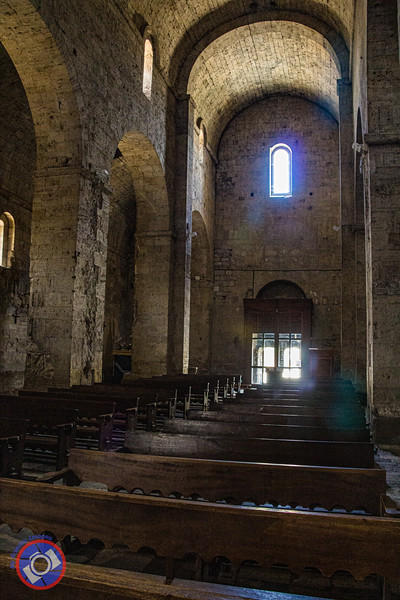 Interior of the Church of Sant Pere Dating Back Over 1000 Years (©simon@myeclecticimages.com)

The Benedictine monastery of Sant Pere was founded in 977. Most of the original structure was destroyed during the Spanish Civil War, but the church belonging to the monastery was spared.

The massive basilica-style church contains three naves and a spacious central apse. This arrangement enabled pilgrims traveling the Camino de Santiago on their way to Santiago de Campostella to pass through the church without disturbing the monks.

We visited the church on a hot day in June, and its coolness was a relief from the summer heat. More important though, was our guide’s narration of its history and the overwhelming sense of tranquility that came over me from the moment we entered.

Admission to the church is free. You will find it in a square. There you will also find shops and cafes for lunch or a brief respite before moving on.

A 1964 discovery of a 13th-century mikvah (Jewish ritual bath) near the archeological site of what once had been Besalú’s synagog, soon became one of the town’s most popular draws. The town’s Jewish heritage is believed to date as far back as the 9th century, and the Mikvah was an important part of the cultural and religious practices of the population.

The Besalú mikvah is one of only three such historic ritual baths to be found in Europe. According to tradition, this is where Jewish women – and sometimes men – cleanse their bodies in natural pools as part of specific rituals, such as a required function before marriage or marking the end of a married woman’s monthly menstrual cycle. 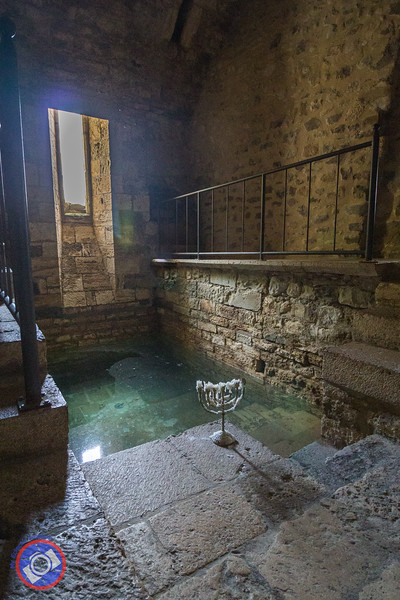 The Mikvah in Besalu (©simon@myeclecticimages.com)

Our visit to the mikvah turned out to be the highlight for me. Entering through a well-hidden door, we descended stone steps into the coolness of the mikvah’s interior.

Dim light from two windows created a somber atmosphere as our guide explained the significance of this particular mikvah. It had been a place of orthodox tradition that had been abandoned as a result of religious persecution. Had it not been so well hidden for so many centuries, this treasure surely would have been destroyed.

You can see the mikvah for yourself – and I highly recommend you do – but you will have to request the key from the tourism office to gain entrance.

There is much more to see and do in Besalú. 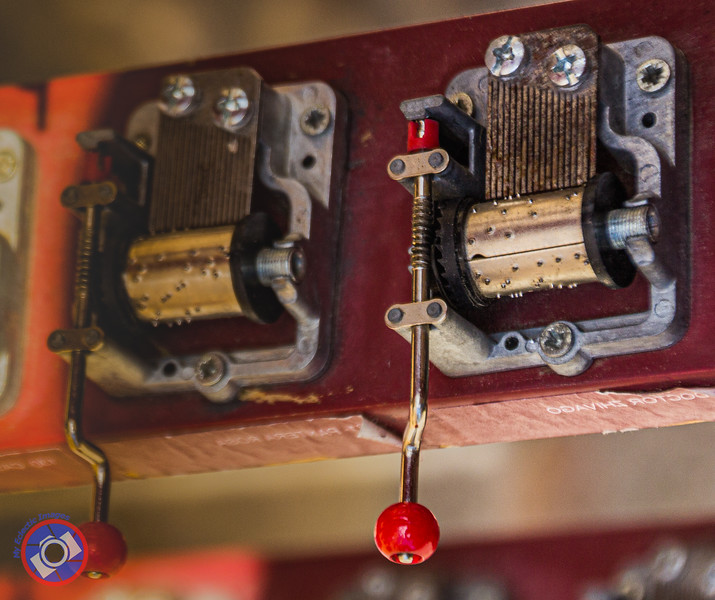 When you visit Besalú, be sure to take the time to chat with the fine people at the tourism office when you’re requesting the mikvah key.

When we were in Besalú, we were given a new device designed to include audio in a self-guided tour the office was developing. We gave it a test run, and although there were a few bugs, the genuine desire for input and determination to get it right impressed me no end. One of my goals is to return to Besalú to revisit what we saw on our first trip, see what we missed, and see how they adapted the tour.

Disclaimer: Our visit to Girona was generously hosted by Patronat de Turisme Costa Brava, Girona with cooperation from Besalu Museu Obert. However, all opinions are entirely my own.