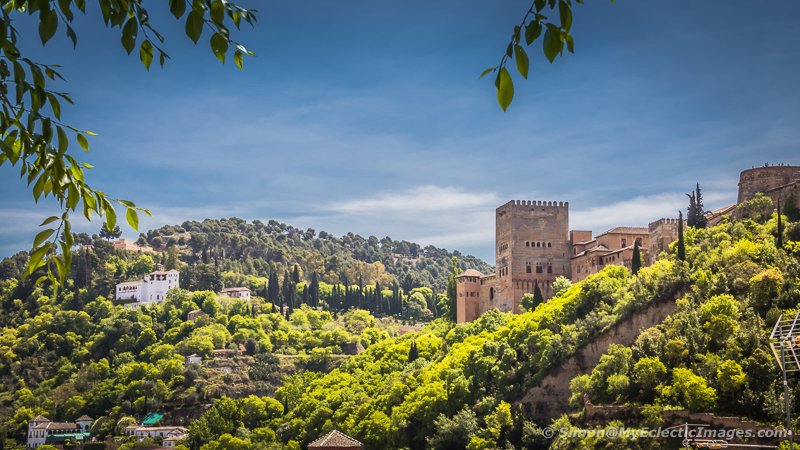 Granada is a city of contradictions. Its history is equal parts seductive beauty and repulsive acts, unwavering courage and unfathomable cruelty, industriousness and destructiveness, glory and shame. Granada beckons you to walk its narrow streets and sit in its open squares. You can ski the nearby Sierra Nevada Mountains in the morning and relax on the beach, 45 miles from the city, in the afternoon. If you can appreciate these contradictions, you’ll fall in love with Granada.

If you’re like most, when you think Granada, you immediately think Alhambra. Of course, there is much more to see, but this magnificent structure is a good place to begin.

Night view of the Alhambra from Across the Valley (©simon@myeclecticimages.com)

Known as the Red Fortress, because of its color, and because it was built by the red-headed Muhammed I in 1238, the Alhambra stands today as a striking symbol of a bygone era of luxury, as well as relative peace and stability. Not to be outdone by his father, Muhammad II – hair color unknown – established the lush gardens enjoyed by millions of tourist and locals each year.

Overlooking Granada from atop a long, steep, challenging hill – just try walking it, and you’ll see what I mean – the Alhambra is worth the effort, or cab fare, it takes to reach it. What you will find when you arrive is a breath-taking castle that took brilliant architects, talented craftsman and several centuries to complete.

Allow at least a half day to explore the stunning palaces, beautifully maintained gardens and fortifications. that comprise the Alhambra. Step back in time to find yourself in what had once been home to sultans, soldiers, servants and the women who occupied the harem.

One of the Palaces and Associated Gardens at the Alhambra (©simon@myeclecticimages.com)

There is a 3-hour tour that moves at a fast pace, is very informative and professionally done. You can also take the self-guided tour and take in the beauty and mystique of this extraordinary place in a more leisurely fashion. Pre-purchase of tickets is highly recommended because there is a limit on the number of people per day and tickets can sell out during peak times.

To even begin to do the Alhambra justice would take twice the length of this post. But I’ll tell you about just one of the many marvels you’ll find there.

Lions by the Dozen

In the courtyard of what is believed to have been the harem is a fountain supported by 12 stone lions. Legend has it that the statues had originally belonged to a prominent Jew. After his death, the family, in the hope of currying favor, presented them to the sultan as a gift.

The Fountain of 12 Lions within the Harem (©simon@myeclecticimages.com)

Since Muslims are forbidden to publicly display images of people and animals, the lions were placed in the courtyard belonging to the harem, where they and the women were hidden from view.

The lions, which some believe were meant to represent the 12 tribes of Israel, underwent major restoration in 2012. Take your time admiring their features, and then wander around the courtyard with its beautiful tiles, ornate arches and touchable textured columns.

A Decorative Stained Glass Ceiling and Elaborately Carved Walls within the Harem (©simon@myeclecticimages.com)

Approximately three million people visit the Alhambra every year, making it Spain’s most popular monument. It is an architectural and historical treasure that has survived invasions, upheaval and even spiteful acts of destruction at the hands of Napoleon’s defeated, departing army.

A Decorative Tiled Elaborately Carved Wall Near the Harem (©simon@myeclecticimages.com)

If you only had one day in Granada, the Alhambra would be the obvious site to see, but please don’t do that to yourself. There is so much to see and experience in this unique and photo-friendly city. At least two, and preferably three days will give you a peek into Granada’s soul, and feed your desire to return for more.

An Alleyway in the Old Quarter of Granada (©simon@myeclecticimages.com)

The city’s soul, however, is by no means pure. What had once been Granada’s Jewish quarter, was completely demolished by the armies of Ferdinand and Isabella when the Castilians completed their conquest of southern Spain.

The large community that had once thrived here was forced to either convert to Catholicism or leave. The Jews scattered in all directions; to North Africa, Greece, Amsterdam, and other parts of Europe, where they hoped to avoid further persecution.

The Muslims faired no better, having been given the same alternative as the Jews. They suffered the same cultural destruction. The Mosque of Granada was raised to the ground in the early 1500s, and the present cathedral was built on the site.

The exterior of the cathedral is a stunning example of Spanish Renaissance architecture. Inside are the tombs of Spanish royalty, including Ferdinand and Isabella. The latter missed her chance at sainthood because of her role in what would be considered today as state-sponsored ethnic cleansing, not to mention the inquisition. Even her support of Columbus’s voyage couldn’t buy her canonization.

If you have time, the interior also contains numerous chapels that were constructed in different styles at different times. If you don’t, the outside of the cathedral is a truly magnificent structure to encircle and study.

Soak Up the Atmosphere

A short walk from the Cathedral, is Plaza Bib-Rambla, a large square that is the heart of Granada. Follow the fragrance of blossoms wafting from the flower stalls, and you’ll find yourself in a wide open area with a fountain, in its center, held up by figures of giants. Columns and lamps make attractive accessories to the calm, yet busy, square.

One of Many Narrow Pedestrian Walk Ways Lined by an Assortment of Restaurants (©simon@myeclecticimages.com)

Plaza Bib-Rambla’s perimeter is composed of many interesting-looking buildings with outdoor restaurants and shops at ground level. You can rest your feet, enjoy something to eat and/or drink, and watch the world go by.

Perhaps it’s the wrong time to bring this up, but this inviting oasis has – like many areas of Spain – a tragic history. Plaza Bib-Rambla, at different times, was center stage for duels, bullfights and, during the Spanish Inquisition, torture and burning of “heretics”, whose ashes were unceremoniously dumped into the River that once flowed near the square.

When You Visit Granada

Andalusia is a playground for the senses, and Cordoba, Sevilla and Granada set the tone for further exploration of the region. History may not have been kind to this area of Spain, but its agricultural, architectural, scenic, culinary, historical and human riches continue to cleanse the soul of Andalusia.

Plan Your Trip to Granada

The center of Granada lies in a valley with much of the town built on the surrounding hillsides. Be prepared to walk up hills as you explore the town. Start planning your visit by considering your accommodation, places to eat and tours that might interest you.

The following are some examples of highly rated hotels from inexpensive to luxurious close to the center of Granada:

Looking for good local food and on a budget then consider eating your main meal at lunchtime and choose any of a myriad of restaurants in the alleys around the city center to see what they are offering on the menu del dia.

Perhaps for a big splurge you could consider dinner at a restaurant like the highly rated Carmen Mirador de Aixa. Reviews suggest that there is an outstanding view of the Alhambra from the patio dining area.

There are a number of companies offering “free” tip-based walking tours but you could also consider: