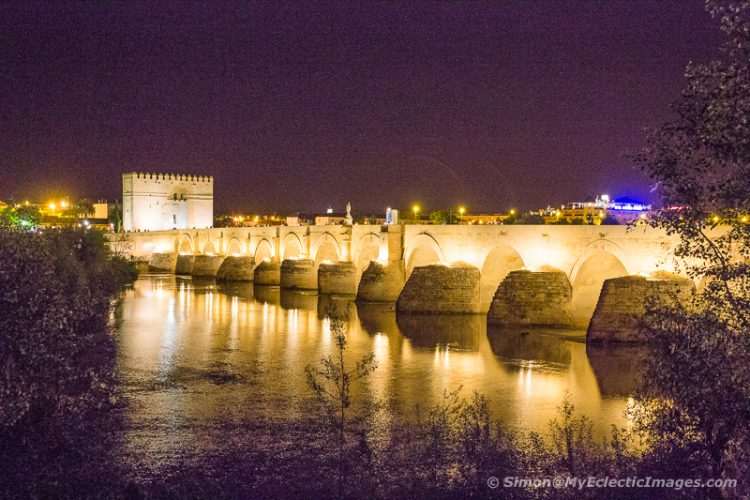 Cordoba, Sevilla and Granada Are Waiting to Embrace You

If Madrid is Spain’s heart, Andalusia including the cities of Cordoba, Sevilla and Granada own a large piece of its soul. It is a region of majestic mountains, sun-drenched beaches, turbulent history, mind boggling architecture, over-the-top scrumptious food and happy, friendly people. So, what’s there not to like?

You can indulge yourself in a week – preferably two – in all of the above and more in three cities that are close in proximity to each other. Similar in many ways and yet totally different. But before I introduce you to the individual charms of Cordoba, Sevilla, and Granada in this and two additional posts, here are some general tips about Spain to whet your appetite.

When You Visit Spain

This multi-faceted city was founded by the Romans in 152 BC, and – in typical Roman fashion – they built a wall around Cordoba. Well-preserved remnants remain, and are part of the city’s historic center.

Elegant Modern Road Bridge on the Outskirts of Cordoba (©simon@myeclecticimages.com)

The main square, which had been a hub of Roman life, was repurposed over the centuries as a Muslim market, bull fighting ring and a place of horrific executions during the Spanish Inquisition. What once was the pre-heretic-burning prison is now a fruit market with a library on the second floor.

Other Points of Interest

A Street of Flowers in Cordoba (©simon@myeclecticimages.com)

If you could see only one site in Cordoba, what would it be? Without hesitation, I would send you directly to the Mezquita-Catedral de Cordoba, an amazing structure that survived centuries of wars, destruction and rebuilding to stand today as one of the most unusual edifices in Spain, and a UNESCO World Heritage Site. Simply put, it is a cathedral inside Europe’s oldest mosque, where two powerful ideologies miraculously came to share one space.

Part of the Grand Mosque in Cordoba (©simon@myeclecticimages.com)

The “Mosquedral”, as I like to call it, originated as a Catholic church built by the Visigoths, using materials from the ruins of a roman temple that had once stood on the site. In 784, several decades after the Muslim conquest, the Caliph, al-Rahman I, demolished the building and erected a grand mosque in Cordoba, which at that time was one of Europe’s largest and richest cities.

Part of the Grand Mosque in Cordoba (©simon@myeclecticimages.com)

Then, in 1236, along came King Ferdinand III of Castile, and reconquered Cordoba. The mosque was reconsecrated as a Catholic church, and in the 16th century, the original cathedral was erected in its centre. Additions continued to be made to the “cathedral section” of the mosque up to the late 18th century.

The Cathedral in the Center of the Original Grand Mosque in Cordoba (©simon@myeclecticimages.com)

You can enter the structure from a patio-like area, where Muslims once performed their ablutions before entering the mosque. The orange trees and fountains had been preserved, creating a fragrant and peaceful welcome mat.

The main hall, of the mosque is supported by 856 columns of jasper, onyx, ivory, marble, and granite. This was where the five daily Muslim prayers and the weekly Friday prayers were held, children were taught and Sharia Law cases heard and decided.

Making the Most of Your Visit to the Mesquite

There are many wondrous components to this unique structure, so make sure you allow two hours at the very least to do it justice. Marvel at the spectacular. shell-shaped ceiling of the mosque’s mihrab, exquisitely carved from a single block of marble, and let your eyes drink in the exquisite decorations of golden mosaics on either side. Then visit the numerous chapels of the cathedral, each one unique in its beauty. Touch the intricately carved 18th century baroque mahogany choir stalls. Climb to the top of the bell tower, formerly known as minaret, and take in a spectacular view of Cordoba and its surrounding areas.

In 2017 entrance to the Mezquita is 10 Euros for adults, 5 Euros for children 10-14 while children under 10 are free. There is no charge for the Patio de Los Naranjos, an expansive open courtyard, where you can rest your tired feet, and if you have a data plan, check your email.

The Patio de Los Naranjos at the Mesquita in Cordoba (©simon@myeclecticimages.com)

When You Visit Cordoba.