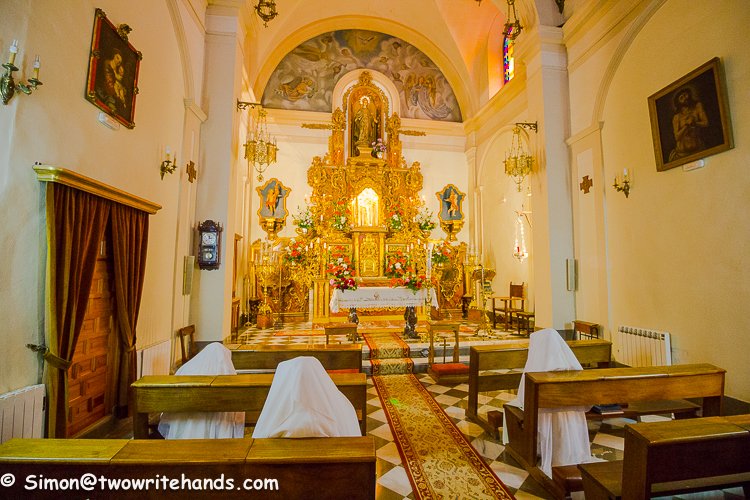 Unwavering Devotion in Its Purest Form. 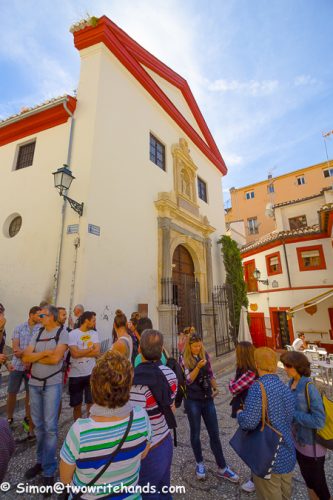 Granada is one of those cities that will immediately take your breath away, and not just from navigating its hilly terrain and cobblestone streets. It is seductively beautiful and – for the most part – historically repulsive. Now, if you think the biggest WOW of all in Granada is the Alhambra, you’re absolutely right. But there are many others to be found among the narrow streets and open squares of this multi-faceted city. For me, an unexpected WOW turned out to be Iglesia San Gregorio Betico and the fascinating women who live and pray there.

Simon, his sister Elizabeth, her husband Mark, Otto and I had left the party atmosphere of Sevilla two days earlier, and had spent the previous afternoon drinking in the magic of the Alhambra. But by the time we set off on our guided walking tour the next morning, we already knew Granada had much more to offer.

Our guide, Eloisa, was personable, knowledgable and spoke superb English. She recounted Granada’s turbulent past as she pointed out buildings, monuments and churches, all the while dispensing little-known tidbits and legends that added spice to the city’s history.

Toward the end of the tour, we found ourselves in front of Iglesia San Gregorio Betico, a small church and convent. During the Muslim conquest, the building on this very site was used as a prison where Christians were routinely tortured and killed. After Granada was reconquered by the Christians in 1492, the prison was demolished and a church was erected to cleanse the site of its bloody past. It was named Iglesia San Gregorio Betico, in honor of the Bishop of Iliberis.

During the 19th century, the church, then wealthy through its ownership of the most fertile and desirable land, was forced by Spain’s rulers to sell off much of its property. Ironically, Iglesia San Gregorio Betico was bought by a business man who immediately converted it into a brothel.

Brothel life being what it is – at least based on historical accounts and not personal experience – the house of ill repute quickly fell into ruin, and the owner abandoned it.

Eventually, the church regained most of its property, and the building became a convent for extremely poor women of a different calling.

Then, in 1936, came the Spanish Civil War, and the women fled the convent. The abandoned building was burned by the Republicans, in this case the communists, who fought for power against Franco.

Now, you would be hard pressed to find a Spaniard with anything kind to say about Franco, but he was a devout Catholic – at least in his own mind – and had the church restored. This house of torture/house of ill repute/house of worship became a convent once more.

The current occupants are the Clarisses, an order of cloistered nuns whose dedication to God is unlike anything I’ve ever seen. When we stepped in we saw five nuns dressed in white and totally immersed in prayer. Their atonal high-pitched song was neither pleasant nor unpleasant. Separating us from the pews and nuns praying at the altar was a fence-like barrier. The message was clear: no contact whatsoever. 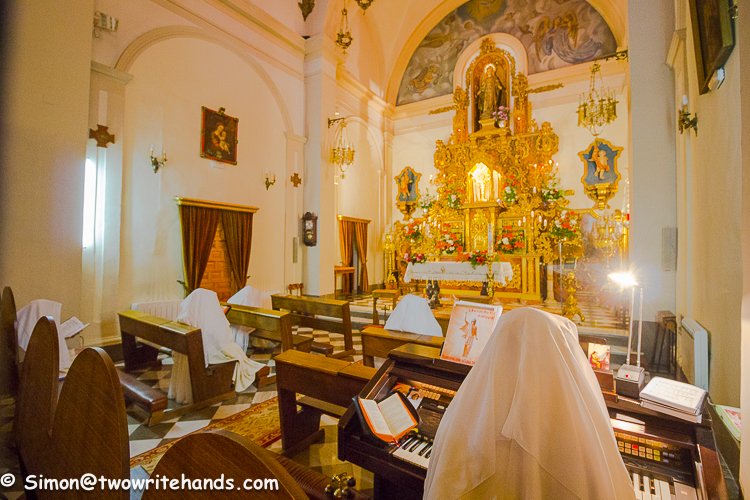 Back outside, Eloisa outlined, in great detail, the lives of the approximately ten elderly women who occupy the convent. They pray. That’s it. This is how the Clarisses spend their every waking moment.

So dedicated are these women to their calling, they speak to no one, not even each other. When they leave the convent wing to enter the chapel, their faces are veiled. The veils are pulled back only when they face the altar, and replaced for their return walk to the convent.

You can come to the chapel at any hour, any day of the year. There is always at least one nun praying at the altar, so that God is never alone.

The Clarisses give everything to God, even their voices. Eloisa explained that this is the reason why their song is devoid of tone and depth.

Why did I find this building and the Clarisses so compelling? After all, I consider myself to be an agnostic, with no particular religious belief. I am neither an atheist, nor do I find religious symbolism offensive. We put up a Christmas tree and light Chanukah candles for no other reason than tradition, and because we like them. I even participate in before-meal blessings at the homes of friends, and say the words, “under God,” when reciting the Pledge of Allegiance. This hodgepodge behavior of mine may sound crazy to some, but it has given me a tolerance and respect for those who practice their faith without hypocrisy. The deep devotion of the Clarisses to an unseen entity impressed me so profoundly, I refrained from uttering my usual stream of wise–cracks. For those who know me, this alone is a WOW. But it doesn’t hold a prayer candle to the history of Iglesia San Gregorio Betico and the women whose dedication to God knows no bounds.