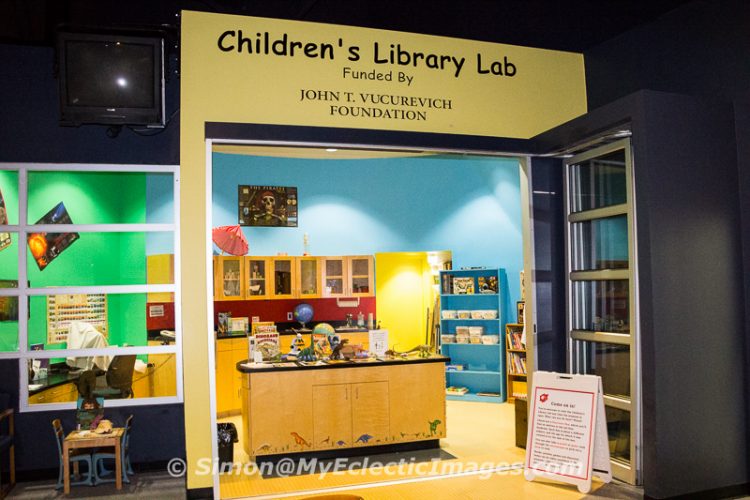 Planning a Trip to Mount Rushmore and Crazy Horse Memorial? Do This First

It was mid-afternoon in Rapid City when we met Troy Kilpatrick, Executive Director of the Journey Museum and Learning Center. Although my brain was, as always, willing, my feet groaned out a protest following a day of standing and walking. But as soon as my brain began to take in the marvels this 58,000 square foot historical treasure trove contained, my hot, tired feet were immediately forgotten.

Lobby of the Journey Museum and Learning Center (©simon@myeclecticimages.com)

Open to the public since 1997, the Journey Museum is divided into five collections presenting the history of the Black Hills from their earliest geological beginnings through the pioneers who eventually settled in the area. Each collection focuses on one specific period in history.

Troy gave us a brief introduction to the museum, then left us in the capable hands of Donna Fisher, one of the Journey Museum’s volunteer docents. Since we were on a tight schedule, we settled for a brief walk-through of the Geology, Paleontology and Archaeological collections in order to spend the majority of our time exploring the Sioux Indian and Pioneer exhibits.

A Display of Rocks in the Geological Section of the Journey Museum and Learning Center (©simon@myeclecticimages.com)

The Sioux Indian collection contains stunning examples of bead and quill work, traditional clothing, saddles, dolls, musical instruments and so much more. I was particularly taken by a full-size tepee of buffalo hide, stretched across poles of cottonwood, and seamed with sinew to keep moisture out.

A Tepee on Display at the Journey Museum and Learning Center (©simon@myeclecticimages.com)

We stepped into the tepee, which was empty, and it wasn’t difficult to imagine a Lakota family living and feeling at home in this space.

A Display of a Lakota Campsite (©simon@myeclecticimages.com)

Interactive exhibits and demonstrations of crafts and activities are an integral part of the Journey Museum’s creative approach to making learning a positive experience for visitors of all ages.

We watched with fascination as Kayla, a museum employee demonstrated porcupine quillwork on a piece of buffalo hide. She also showed us some of her intricate beadwork. With patience and skill, Kayla demonstrated how she pushes her needle through the top layer of the hide in order to attach the beads and quills.

A Demonstration of Various Native American Crafts at the Journey Museum and Learning Center (©simon@myeclecticimages.com)

Donna showed us a buffalo bladder that was used as a water cantina, antlers, horns and feathers that were all touchable. She told us how horses hooves were boiled, molded and used to make spoons and other utensils. And the many items and artifacts we saw were just a fraction of what this one collection alone had to show us.

This area was also filled with magnificent collections. Story walls featured dresses, guns, branding irons and other items that beckoned us to linger and learn. These remnants of everyday life had once belonged to settlers who endured many hardships to establish new lives in South Dakota.

An authentic-looking trapper’s cabin and a well stocked replica of the first hardware store in South Dakota, tickled the imagination and helped nudge visions of early settlements to the fore.

The notorious General George Custer, Wild Bill Hickock, Sitting Bull, Crazy Horse, and Red Cloud were all represented. Donna entertained us with stories as she shepherded us through the exhibits. From the tale of a military doctor who won the trust of the Lakota, and attended Crazy horse as he died, to how creative and determined pioneer women solved the problem of those uncomfortable sidesaddles, we were enthralled by her narrative. But one particular story captured my attention and held it tight.

Donna stopped to describe a gold dress in a glass case. It was sheered at the waist and had buttons down the front. This was the unconventional wedding attire of an unconventional South Dakota woman. Alice Bower Gossage, who was far ahead of her time. As Alice Bower, she made the trek from Vermillion to Rapid City in 1882, where she married Joe Gossage,

Joe had founded the Rapid City Weekly Journal in 1878, which later became a daily, and is still published today. Eight years into their marriage, Joe became ill. In order to help her husband with the newspaper, Alice began writing a column, which she signed A.G., on morals, temperance and suffrage for women. The couple owned and operated the Rapid City Journal until 1925.

In a letter to Joe during their courtship, Alice told him that she didn’t want to have children. She knew no woman of the late 19th century, who had children, could ever have a career in journalism. And so, the Gossages remained childless,

Along with her work at the Journal, Alice was active in the Woman’s Christian Temperance Union, steadfastly supporting social reform and women’s right to vote. Serving as a beacon of hope for Rapid City’s poor., Alice had what she called a ‘Sunshine Room’ filled with items for those in need.

“I love her story,’ said Donna, “and I hate her skinny little waist.”

A Happy Learning Place for Children

The museum is enchantingly child-friendly. The activities geared to all ages, from toddlers to teens, are endless. And – heaven for a blind person – touching is not only allowed, it’s encouraged.

Donna produced a kids’ favorite, in the form of a ’Buffalo Box’, containing – what else – pieces of buffalo. I held samples of tough hide, and a much softer piece that had been tanned. Hair used for making rope and bones used for tools, decorated to individualize them leaving no doubt as to whom each belonged. There was even a piece of dried up buffalo turd, which, among other things was used on cradle boards as an absorbent. I guess it was like a kind of disposable diaper. Yes, I touched it. And no, it didn’t smell or feel disgusting. The ‘Buffalo Box’ is a brilliant example to young visitors of how nothing went to waste.

Contents of a “Buffalo Box” at the Journey Museum and Learning Center (©simon@myeclecticimages.com)

In every section of the museum, there are things for youngsters – and yes, blind folks to do and touch. “Little kids can put their hands into dinosaur tracks,” Donna said. And there are videos, games, hands-on activities, summer programs and special events. These are carefully and lovingly created to keep children happy, occupied and all the while, learning about the rich history of where they live.

The Discovery Area Where Young “Archeologists” Can Dig for “Prehistoric Bones” (©simon@myeclecticimages.com)

“The original intent of the museum,” explained Troy, “was that this would be the beginning of the journey, starting with a background of the Black Hills. Your journey starts here.” Okay, confession time: we had already visited Mount Rushmore  and Crazy Horse Memorial before visiting the Journey Museum. No, the planet didn’t crumble and fall apart as a result, but our time in the museum was all too brief. Next time we’re in Rapid City, I plan to make the Journey Museum the first stop – I suggest you do the same. The perspectives you’ll gain regarding all aspects of life in the Black Hills from the very beginning will serve you well on your own journey.

Disclaimer: Our stay in Rapid City was partially hosted by the Rapid City Convention and Visitors Bureau. All opinions, however, are, as always, my own.