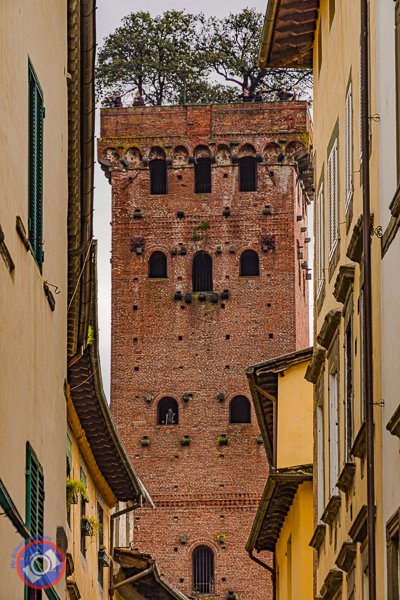 A Small, but Brilliant, Tuscan Jewel

If you are in Florence and headed for Carrara to see the marble quarries, you will pass right by the walled city of Lucca. That is how we found ourselves making a brief visit to this delightful town in 2003. But because we had done no prior research and since we were on a tight schedule, we spent about an hour wandering around the area inside the city walls.

Lucca was never forgotten, but the opportunity to return didn’t present itself until 2018. We signed up to volunteer as facilitators in English language immersion programs in both Spain and Italy, with an interlude of a hosted Costa Brava trip and extra time to explore Italy in between.

The plan was to fly in to Pisa to see the iconic tower, spend a couple of days in Lucca, and then head for Florence via Bologna. Little did we know Penny would break her leg in Pals, Spain thus relegating me to explore Lucca alone.

As such I have been assigned the task to provide an overview of Lucca which I will do mainly with pictures rather than regaling you with the extensive historical background that is usually provided by Penny.

A Brief History of Lucca

There is some discussion of the true origins of Lucca since it has been attributed to both the Ligurians around 300BC and the Etruscans. What is certain is that by 180BC there was an established Roman city which ultimately took the typical orthogonal form with a decumanus and a cardo. The intersection of these two streets created the forum that today is an important square with the church of San Michele in Foro as the focal point.

Another important open area is the Piazza Anfiteatro which was the site of the original Roman amphitheater. This piazza is oval in shape and now ringed with buildings that  date back to a 19th century restoration.

The city walls that totally encircle Lucca for a length of about 3 miles were built in the 16th and 17th century as a defensive measure. They are the fourth iteration of the walls that were originally created by the Romans. Today, because of their unusual width, they serve as a magnificent recreational area for walking, jogging, and cycling.

During the 14th century, numerous towers were constructed within the city walls, their heights being dictated by the prosperity of the families who constructed them. It is regrettable only a few of these structures remain.

Lucca claims Giacomo Puccini as a son of the city. He was born in 1858 and spent his childhood years in the city before relocating to Milan. His birth place is now maintained as a museum to his life and creations.

The Towers of Lucca

Only a few of the towers built during the 14th century remain to grace the skyline of Lucca. Possibly the best known is the Torre Guinigi built by the family with the same name. Standing at a height of 148 feet (or 45 meters) it is unique because of the presence of a roof top garden that includes several trees.

The tallest building in Lucca, at 164 feet (50 meters) is the Torre delle Ore or clock tower that has also withstood the passage of time. A legend associated with this tower is that a woman sold her soul to Satan in exchange for remaining young and beautiful for 30 years. At the end of her borrowed time, in an attempt to stop him from collecting his payment, she allegedly climbed the tower in a futile attempt to stop the clock. And still, the devil claimed her soul.

The Churches of Lucca

There are several magnificent churches in Lucca these include the Duomo di San Martino and the Basilica of San Frediano. The latter is one of the oldest churches in Lucca, having been founded sometime during the tenure of Saint Frediano, who was bishop from 560 to 588. It’s claim to fame is a large mosaic that graces the front facade and dates from the end of the 13th century.

Known by the locals as Piazza Grande, after Lucca was conquered by Napoleon in 1805, it was dedicated to him by his sister Elisa Bonaparte Baciocchi, who was installed as princess of Lucca. This square was always the center of political power in the town. During her reign, its entire appearance was changed by demolishing some buildings and a tower, and planting a border of sycamore trees to frame the square. These trees remain as a lasting reminder of Napoleonic times. While exploring the square, don’t overlook the small area containing a priceless antique carousel, which appears to be dwarfed by the surrounding square and the majestic buildings around the perimeter.

Other notable squares include Piazza San Martino located in front of the cathedral bearing the same name and the Piazza Anfiteatro. The former is frequently used for various cultural activities including an antiques market that occurs on the third weekend of each month.

As previously described, the Piazza Anfiteatro is of historical significance because of it’s use in Roman times as an amphitheater for gladiator battles and other games. Today it is like a very large oval-shaped courtyard ringed by buildings that have apartments on the upper floors and restaurants and other businesses at ground level.

Perhaps the most symbolic aspect of Lucca is the city wall. Unlike a traditional battlement that was just wide enough for soldiers to move weapons and other instruments of war to the locations where they were needed, the city wall of Lucca is a wide thoroughfare that completely encircles the historic section of the city at a height of 30 to 40 feet above street level.

The roadway on top of the wall is lined on either side by trees and grassy areas. Access is via ramps that come up from the part of the city contained within the walls, making it wheelchair accessible. This arrangement creates a park like atmosphere and both locals and visitors use the area for a variety of recreational activities including bicycling, jogging, and walking.

The old city inside the walls is primarily a pedestrian only zone with exceptions made for delivery vehicles and the transportation of individuals with disabilities to destinations within this zone.

If you are including Pisa and Florence or Bologna in your itinerary, I highly recommend taking a break of at least 24 hours and possibly longer to explore this gem. It is on your way as you travel on the east-west route through northern Tuscany.