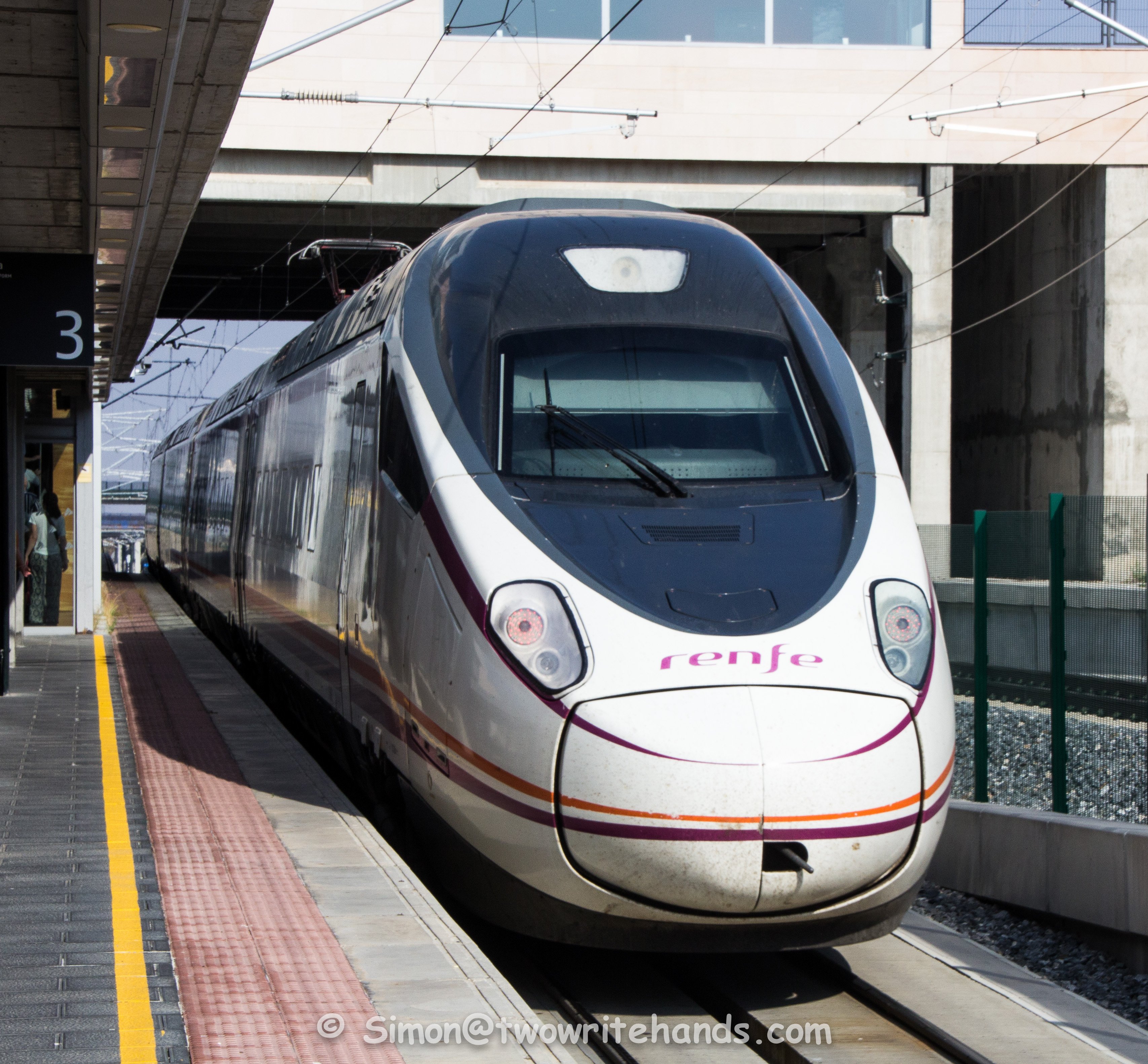 High-Speed Gets You There, So You Can Take Your Time Being There

Life is full of “firsts”, and if you’re lucky, most of them will fall under the category of WOW! I’m one of the lucky ones. Many of my “firsts”, such as my first ride on a high-speed train, have been of that class.

It would have been easy for Simon, Otto and me to have spent our entire five-day stay in Madrid, discovering both the well-known and the hidden treasures of this seductively beautiful city, but Spain’s high-speed trains made expanding our horizons not only possible, but well worthwhile. 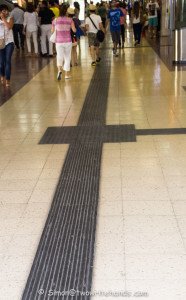 Aid for the Visually Impaired at Chamartin Station

Once we had decided to take day trips to Segovia and Toledo respectively, getting there was a breeze. For our first venture out of Madrid, we took the Metro, which was a short walk from our hotel, and then entered the Chamartin Station to catch the RENFE high-speed train to Segovia.

Always being open to the surprises life keeps in its back pocket, I found one built right into the floor of this large and busy station. The floor had a light beige background with two-foot wide inlaid black lines in a more mat-like texture. Where the lines intersected, the center square had a ribbed feel underfoot. We began to speculate that  these lines had been placed there to help people who were blind or vision impaired to find their way around easily and independently. As we were mulling this over, Simon spotted a woman with a guide dog using the black lines to find her way to her destination platform.

We were quite impressed with this low-tech solution to a problem faced by people with vision impairments and blindness that added interest to an otherwise uninteresting floor for those who can see. Lines that can easily be followed by a cane or guide dog, sharp contrast for people with low vision and clear tactile markings at intersections that can be detected by cane or shoe: I had just found yet another reason to love Spain and its people! 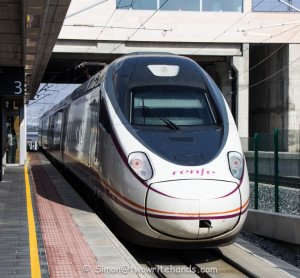 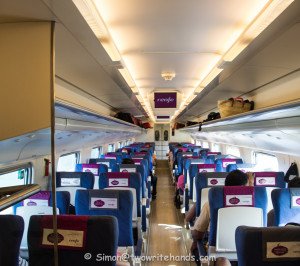 Interior of a RENFE Train

Boarding the train with my head spinning and a goofy grin on my face, I tried to focus on what was ahead: my first ride on a high-speed train and a day in Segovia. 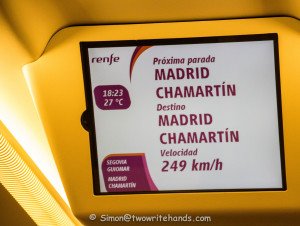 Onboard Monitor Showing the Train’s Speed

The train began to move, and then really move. As soon as we were out of the city, it went into high gear, reaching a maximum of 155 Miles per hour.

The varied scenery whizzed by, starting with urban sprawl blending into a countryside of gently rolling hills with a variety of agricultural ventures and distant escarpments and mountains. But according to Simon it didn’t look strange as a result of the speed at which we were traveling.

The train may have been making an awful racket to the ears of man and beast on the outside as it sped along, but it was surprisingly quiet on the inside. The rocking motion I was expecting didn’t materialize either. The ride was smoother and quieter than any train I can remember, and it got us to Segovia in less than 30 minutes. Had we chosen to go by bus it would have taken between an hour and an hour and half on a far less comfortable conveyance, and we would have had  less time to spend in Segovia.

View from RENFE Train at 150 mph

After that first ride, the novelty began to gradually wear off with every trip that followed. But, from my perspective, that first high-speed train trip  was a real WOW!