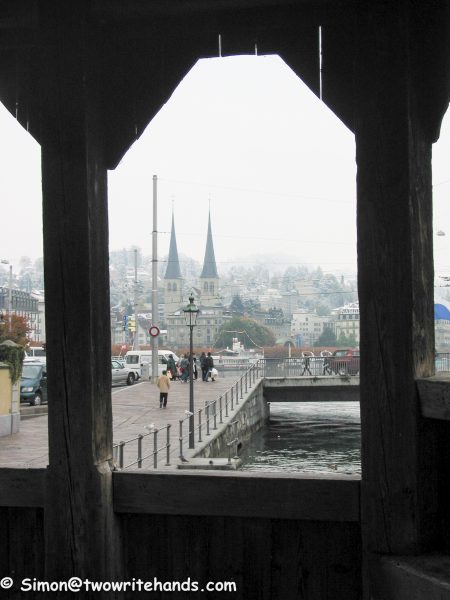 From Medieval Treasure to Modern-Day Phoenix.

Are you a “once is enough” kind of person when it comes to TV shows, movies and books? Because there’s so much new to discover, I definitely am. But once in a while, something comes along that I can see or read over and over again, and never get jaded. There are always new discoveries within the old. This has been my history with the Chapel Bridge in Lucerne, Switzerland, and the reruns evoke as big a WOW as the first time I set foot on it.

Okay, I confess to having a thing for historic bridges: the Ponte Vecchio in Florence, the Charles Bridge in Prague, the Avignon Bridge. But since the first time I set foot on it in 1997, the Chapel Bridge has held a special place in my travel memories. 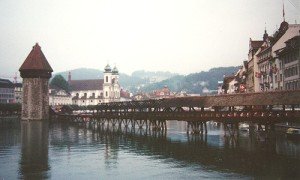 Chapel Bridge the Day After the 1993 Fire (Courtesy of http://lucerne.all-about-switzerland.info)

Perhaps it was the sound and sensation of my footfalls as I walked across the Reuss River on a medieval foot bridge dating back to 1333. Or perhaps it was learning of the bridge’s near destruction by fire in 1993. I may even have been in total awe at the speed and well-known Swiss precision with which it had been restored. All I know is that in the twilight of a crisp November afternoon, this covered bridge, the oldest in Europe, was something truly out of the ordinary.

It is said that twilight is the best time to visit the Chapel Bridge, bathed in dusky light just as it is illuminated for the oncoming night. I wanted to linger, but three teenagers and Simon were impatient to find pizza and a place to sit.

I have to admit, the pizza, served up hot, gooey and laden with toppings in a family-owned eatery, was outstanding, but the Chapel Bridge was calling me back even then.

The next morning, we walked through old Lucerne to the top of the city wall. The view of the town, the water and surrounding hills was like a picture postcard, complete with bright blue sky and puffy white clouds. But I had to visit the Chapel Bridge one more time before departing for Zurich.

This time the sunny day offered a totally different view from the bridge. Stopping several times to touch both the original and restored wood. I seemed to be the only one among us under the spell of the Chapel Bridge.

The  Chapel Bridge runs diagonal to the shoreline, and is located where Lake Lucerne flows into the Reuss River. Walking the 670 foot long span from end to end isn’t exactly what you’d call a workout. But then, what’s the hurry?

View of Lucerne from the Chapel Bridge

Take your time and drink in the views of Lucerne, the sun glinting off the river and the octagonal water tower. As you stroll, make sure you look upward at the 17th century paintings that occupy the spaces between the cross members and the roof structure.

These paintings represent Lucerne’s history up to the 1600s, when a local painter by the name of Hans Heinrich Wägmann created them on panels made primarily of spruce – a few of the pictures were also painted on maple and linden wood boards – measuring 59 inches to 71 inches tall and 33 inches to 37 inches wide. 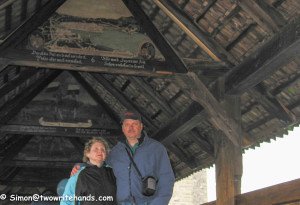 Visiting the Chapel Bridge in October 2003

Along with the historical element, the paintings portray a decidedly Catholic slant with scenes featuring Lucerne’s patron saints, St. Leger and St. Maurice.

There are only a few remaining covered wooden bridges sporting old paintings under their roofs, and two of the best-known are located in Lucern: the Chapel Bridge and the Spreuer Bridge.

The original reason for constructing the Chapel Bridge was to help fortify Lucerne in case of attack.

But what of the brick Water Tower, rising 140 feet into the blue, adjacent to the bridge? Well, for one thing, it isn’t really a water tower as we know it. Because it sits in the water, “Water Tower” is what it has been called since it was erected 30 years prior to the construction of the Chapel Bridge.

Over the centuries, the tower had been utilized as a city treasury, a watchtower, a prison and, in the bad old days, a torture chamber. But don’t set your sights on climbing to the top of the Water Tower in search of screaming ghosts. It’s not open to the public, a local artillery association now shares the space with a touristy gift shop.

The bridge/tower duo is one of the most popular landmarks in Europe, but the Chapel Bridge came dangerously close to total annihilation just over two decades ago.

In the early hours of August 18, 1993, flames were seen erupting from a boat under the bridge and from the bridge itself. Although the fire brigade arrived quickly and were able to bring the fire under control, old wood and paintings of oil were no match for the wrath of the inferno. When it was over, approximately two thirds of the Chapel Bridge had been consumed.

The pillars, the bridgeheads and the Water Tower survived, but most of the priceless paintings, dating back to 1611, were lost. Of the 110 original pictures, 85,, were, completely destroyed. Sadly, only 25 of the paintings could be salvaged for restoration.

Within a year, the burned sections of the Chapel bridge had been completely rebuilt, and the landmark reopened to the public. As for the artwork, original paintings from a part of the bridge that had been torn down in the 1800s were taken out of storage and pressed into service to replace what had been lost. As a stark reminder of the savage fire that had engulfed the Chapel Bridge, several of the burnt panels have been left in place.

In 2003, Simon and I were once again on our way to Zurich. And once again, I had to stop in Lucerne to see my bridge. To no one’s surprise, for me, the Chapel Bridge was then, and always will be a WOW!

To better understand my fascination with the Chapel Bridge, here is a short video to help bring this magnificent historical gem to life for you.