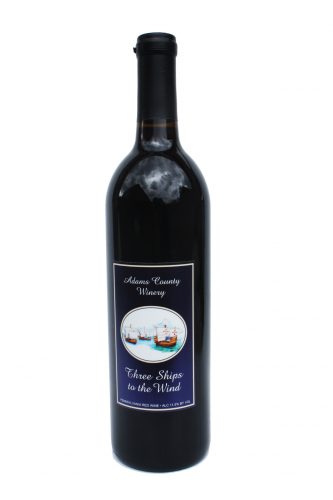 My no-fail slow cooker pot roast was fall-apart tender, and the potatoes, carrots and peppers were done to a turn. As we sat down at our dinner table with good friends, Simon poured the wine bearing the whimsical name, “Three Ships to the Wind”. We clinked glasses, toasted to I-don’t-remember-what, took our first sip and said, “WOW!”

If you’re a regular reader of this blog, you surely have figured out by now that I’ve been totally smitten by everything Gettysburg since our visit in mid-October, 2014. Of course, I indulged my passion for Civil War History at several venues. But the town and surrounding countryside was also replete with sights, smells and tastes that had nothing to do with the pivotal three-day Battle of Gettysburg.

We had spent the morning, and early afternoon touring the battlefield with a highly knowledgable licensed guide; the same gentleman who showed us the North Carolina State Monument, speaking in detail of it’s history and meaning. By the time the tour was over, we were saturated with fascinating facts and churning with conflicting emotions. This seemed the perfect time for a tour and wine tasting at Adams County Winery. 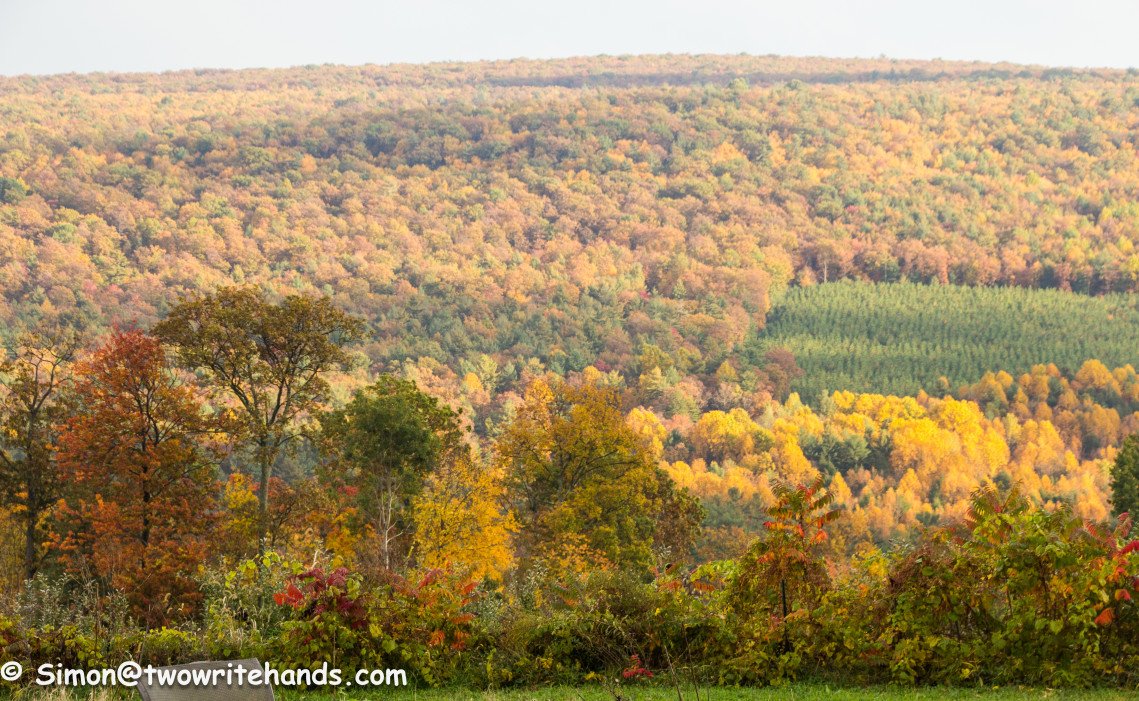 A mere 15 minutes outside Gettysburg, we found ourselves marveling at the beautiful rolling countryside, flaunting its lush vineyards and orchards of trees heavy with autumnal fruit. Simon couldn’t resist stopping the car to pick up a ruby red windfall apple that called his name from the roadside.

The road, awash with late afternoon light, led us to the Adams County Winery tasting room, where we were invited to sample three reds, two whites and one dessert wine. There was a respectable selection from which we chose our six. All were accompanied by brief descriptions to assist in this truly important decision-making process.

There were bottles bearing names like Rebel Red and Tears of Gettysburg, lest we might actually have forgotten where we were. There was also Rusty’s Red, named for the resident golden retriever, and Stray Cat Strut.

One of my favorite names – and wines – was Metrosé, which was, you guessed it, a rosé. The wine is the namesake of Metro Meteor, a retired race horse who – I kid you not – now passes his time creating abstract art with a paintbrush in his mouth. Not only do his paintings sell well, he also has managed to draw in 40,00 friends on Face Book.

But Metrosé isn’t just horseplay in a bottle. For one thing, the wine was delicious, light and not too sweet. For another, proceeds from all sales of Metrosé benefit the New Vocations Racehorse Adoption Program. 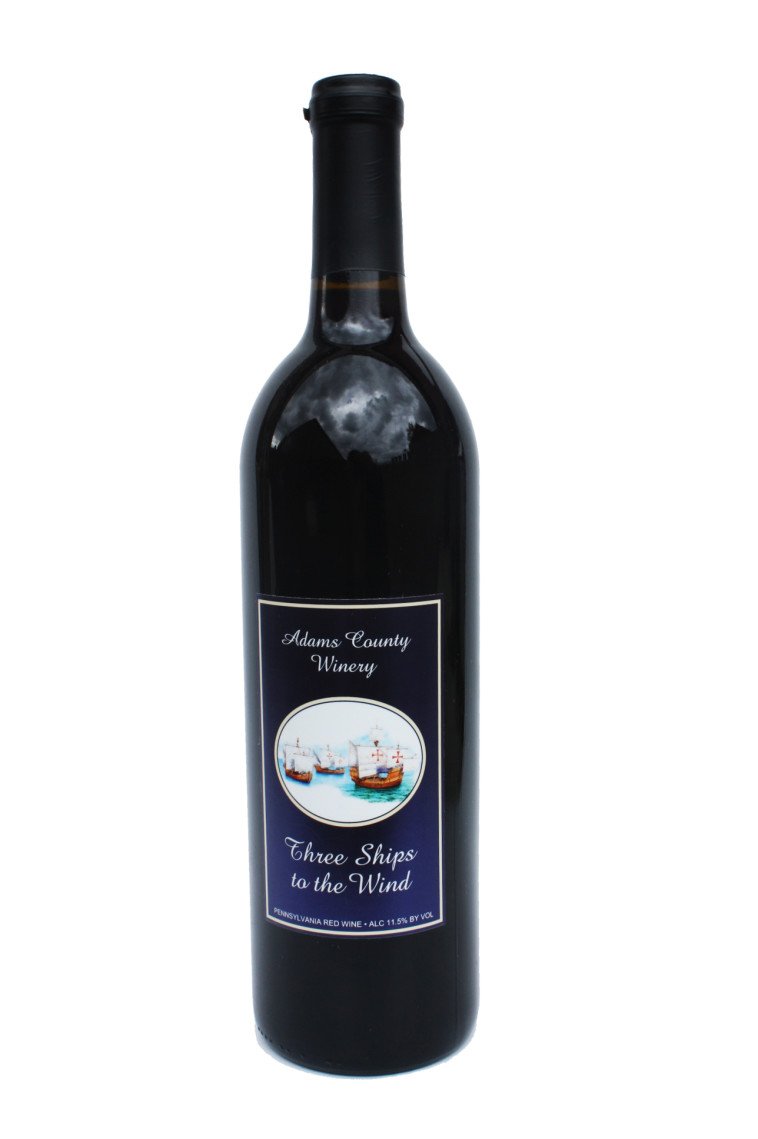 Three Ships to the Wind turned out to be as delightful as its name. A charming blend of Chambourcin, Cabernet, Noiret, and peach. It was our favorite among all the delicious wines we tasted that afternoon.

As was suggested, we took three sips, noting the difference between each. There was a slight hint of peach in the first taste, a stronger peach note in the second and a distinct pop of peach in the third. The total effect was that of a juicy, mellow wine that saved the best for last.

Three Ships to the Wind is touted as being a perfect pairing with spicy food, but it was also a fruity, but not sweet, counterpoint to the savory pot roast.

Suggestions for Three Ships to the Wind include using it as a base for sangria, or warming it and adding spices for mulled wine. Both sound like good ideas, but I think I’ll stick to this wine in its pure, peachy lusciousness.

Of course we bought some, along with a dry Riesling that had a floral base with whispers of honeysuckle and apricot, and a fragrant aroma that kept its promise.

We also purchased a bottle of Timepiece Riesling, one of the dessert wines we sampled. This refreshing wine had an intense floral aroma, and fruity notes that sang of tropical breezes. Drinking it conjured up fantasies of taking a sunset cruise on our sailboat with some decadent cheeses, red grapes, homemade crusty bread, chocolate covered strawberries and this amazing Riesling. Mmmmmmmm! 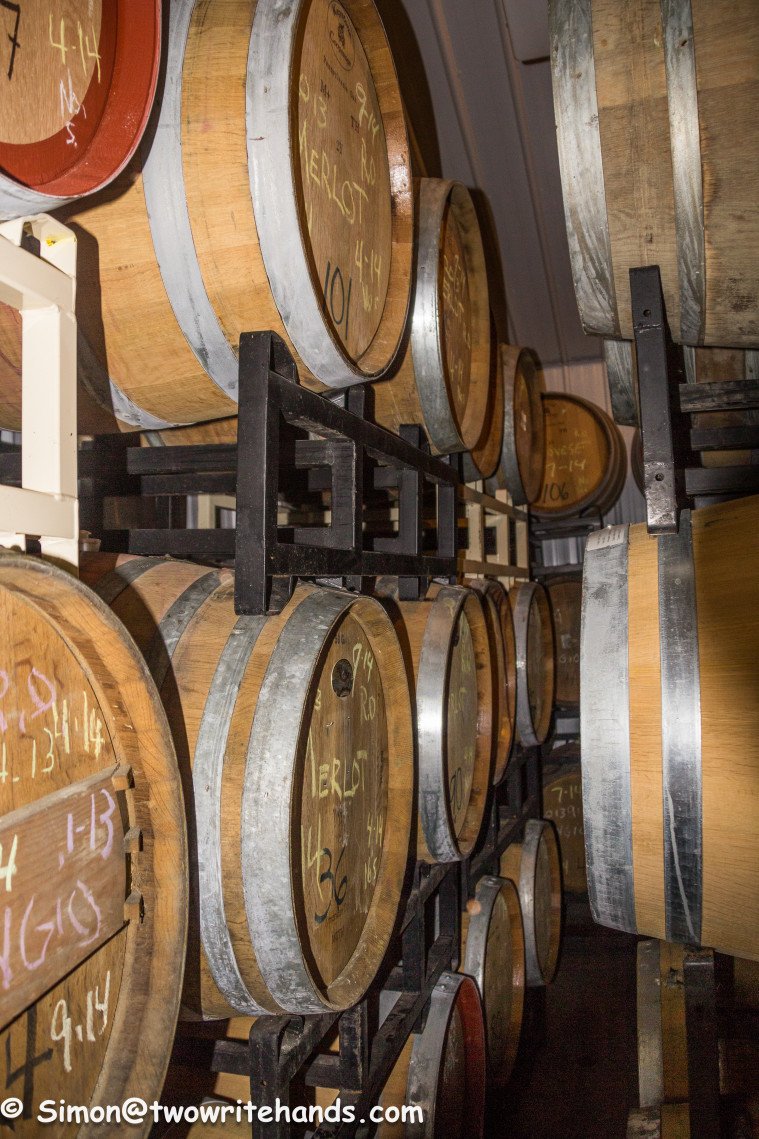 Barrels of Wine in Tight Quarters at the Adams County Winery

Back in the real world, we enjoyed each wine we sampled. Even the two or three that weren’t exactly our style went down easily with the custom made oyster crackers that were available for palate cleansing between wines. These tasty morsels are a flavor combination of oyster crackers and animal crackers. They can be purchased by the box at the winery, and are highly addictive.

Adams County Winery is the fifth oldest operating winery in Pennsylvania, and has been making quality affordable wines for the last 40 years. Today, it is a nationally recognized producer with several award-winning wines to its credit. It has also been consistently voted the best winery in the Gettysburg area.

Located in the South Mountains that overlook Gettysburg, Adams County Winery has been blessed with the kind of temperate climate and fertile soil that create a perfect growing environment. These ideal conditions yield bumper crops of grapes and other fruits that enable Adams County Winery to produce their unique wines.

Another enabler is San Antonio native, Michael Vorauer, who since 1983, has been perfecting his craft as a cellar master and winemaker. In recent years, 12 of his wines have earned over 35 medals, including Double-Golds, Golds and Best of Show, just to mention a few.

The Adams County Winery staff is friendly, knowledgeable and helpful. You’ll find the atmosphere of the tasting room casual and relaxing. Now, you know I wouldn’t steer you wrong, right? So do take my suggestion to visit Gettysburg, and after immersing yourself in the historic, cultural and culinary treasures the area has to offer, treat yourself to a free wine tasting at Adams County Winery. And by all means, try Three Ships to the Wind. If that third sip doesn’t make you say, “WOW,” you’re sure to find something that will.

This article was made possible in part through the generosity of Destination Gettysburg and its members. All opinions, however, are entirely my own.

Learn about the many fascinating facets of Gettysburg at Destination Gettysburg.