A Rock of Ages, Southern Style.

It was 9:30 PM on that hot Labor Day Monday, as we sat on the grass looking up at a mountain of granite called Stone Mountain. Not a particularly original, name to be sure, but the laser light spectacular that began to unfold on its north face definitely was. We, along with hundreds of others, were presented with an entire 45 minutes of WOWs

Our lives were about to change. Simon, eight-year-old Kevin, six-year-old Gary, Buffy and I had spent the better part of the previous week house hunting in preparation for our move from Knoxville, TN to Atlanta, GA. We were tired, frustrated and cranky. The good news was that our Knoxville house was already under contract. The bad news? We still hadn’t found the right Atlanta house for us. It was our real estate agent who suggested we assemble a picnic, head for Stone Mountain and take in the laser light show.

This spectacular event, which has been an Atlanta summer tradition since its debut in 1986, has been enjoyed by over 25 million people. The show has, in recent years, been digitally re-mastered, and I have yet to see the results.

What I remember from that night, and countless others during the 17 years we lived in Atlanta, is a huge lawn occupied by people of all ages, from all parts of the country and beyond, picnics ranging from fast food to elaborate homemade spreads, laughter, and a general sense that all was right with the world. And this was all before the show began. As the twilight melted into the oncoming darkness you could feel the anticipation heightening. And then, it was finally show time.

With the mountain as an enormous screen, bright laser lights flashed scenes featuring characters and graphics that told the story of the theme for that particular summer. An eclectic assortment of familiar music clips drew us deeper into the magic unfolding in front of us.

Although the body of the show varied from year to year, the finale was always the same. Clips of Willie Nelson and Ray Charles singing “Georgia on My Mind”, Lee Greenwood’s “God Bless the U.S.A.” and Elvis Presley’s “An American Trilogy” filled the night, while on the mountain face, the Confederacy rode into battle. At the end, a broken map of the United States would come together as Elvis belted out the last chorus of ”The Battle Hymn of the Republic”, followed by a fireworks display that seemed to get better from year to year.

Stone Mountain boasts of being home to the largest high relief sculpture in the world, known as the Confederate Memorial Carving, it depicts three Civil War heroes of the Confederacy: President of the Confederate States, Jefferson Davis, General Robert E. Lee and General Thomas J. “Stonewall” Jackson. The mammoth carving, is larger than a football field, plus three acres, trumping Mount Rushmore in size. The three men tower 400 feet heigh, and measure 90 by 190 feet, . The carving is recessed 42 feet into the surface of the mountain, with the deepest point at Lee’s elbow.

The dream of the Confederate Memorial Carving took root in 1912 in the mind of a charter member of the United Daughters of the Confederacy, Helen Plane. Three sculptors worked on the carving, including Gutzon Borglum, who carved the four presidents on Mount Rushmore and created the North Carolina State Monument at Gettysburg.

Borglum began the project in 1923, but abruptly departed in a huff following a dispute with his employers, taking all his sketches and models with him. Augustus Lukem, was hired in 1925 to finish the carving. He began by removing Borglum’s work with the intent of replacing it with the three central figures on horseback we see today.

By the time Lee’s head had been completed, lack of fresh funding brought the project to a screeching halt. And there the bodyless, horseless general stayed until 1964, when the state of Georgia, who had purchased the mountain and the surrounding land nearly a decade earlier, hired Walker Kirkland Hancock of Gloucester, Massachusetts to pick up where Lukem left off.

The Confederate Memorial Carving was dedicated on May 9, 1970, and the finishing touches completed by 1972.

Looks can be deceiving, and so it is with the carving. It is in fact much larger than it appears when you stand back far enough to see all three figures.. It would have been easy for workers to duck inside a horse’s mouth to shelter from one of Georgia’s famous sudden, but brief, deluges. 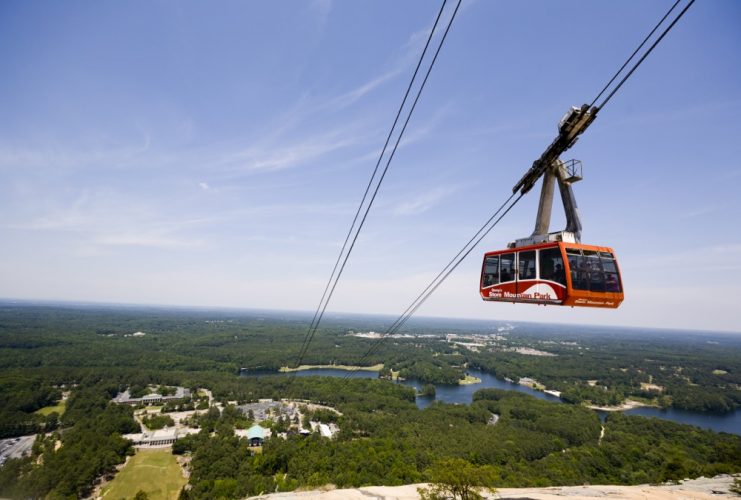 Today, you can take a ride on the Summit Sky Ride, during which you will be treated to a history of Stone Mountain. And when you reach your destination, the views will be nothing short of breath-taking. Riding back is optional. Walking down the mountain can be a good way to get some exercise and enjoy the quiet atmosphere of the park.

But Stone Mountain isn’t only about the Mountain, marvelous as it is. You can enjoy an entire family vacation or family reunion without ever leaving the park. A hotel with a pool, plus shopping and dining options are a good start. Then there are recreational activities such as golf, cycling, fishing, swimming at a beach, hiking and other sports.

There are live shows, the scenic railroad, the antebellum plantation and farmyard, the grist mill, The Great Barn and more.

During our time in Atlanta we spent many a happy day and evening with family and friends at Stone Mountain Park, and I treasure all the memories. Whenever we would have out of town visitors, we made sure that we took them to Stone Mountain Park for the laser light show. And whenever we did, there was always a WOW reaction from everyone.

Learn all about what there is to see and do at Stone MountainM Park’s official website.

Admission to Stone Mountain Park is $15 per vehicle, while entering on foot is free. This includes the Laser Light Show if you sit on the lawn. You can opt for VIP Lasershow Terrace Seating Packages for $15 to $24.95, which includes snacks or dinner before the show.