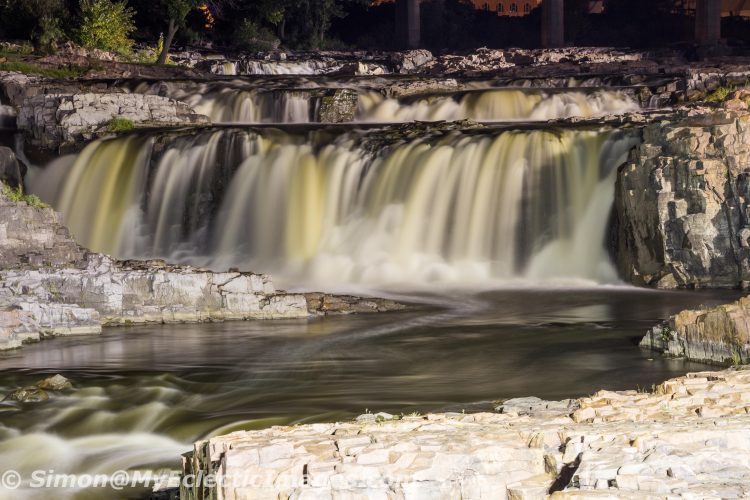 The Diamond in the Rough that Became One City’s Sparkling Jewel.

They don’t exactly roar. In fact, they sound more like a water tap on steroids with the volume turned up to maximum. They may easily be dwarfed in size and grandeur when compared to the likes of Niagara, but the water falls located a short distance from downtown Sioux Falls lies at the heart of a WOW of a success story.

It was September 11; a day that evokes painful memories of tragedy and loss every time it rolls around. This time, Simon, Otto and I were spending our first day in Sioux Falls discovering the finer side of humanity’s creativity, foresight and determination.

After exploring the city’s Sculpture Walk, Krista, our well-informed and enthusiastic guide, shepherded us to Falls Park, a former eyesore, turned local and tourist recreational destination. Her description of what had been a neglected parcel of land with only the waterfalls to distinguish it, gave us a deep appreciation of what had been accomplished in eight short years. Understanding the remarkable transformation of Falls Park between 2004 and 2012, substantially enriched our experience .

We began our tour of this 123 acre city park at the Falls Park Visitor’s Information Center, which includes a large collection of Sioux Falls memorabilia, and a five-story, 50 ft. viewing tower that provides a spectacular panoramic view of the park and the Sioux Falls skyline. Admission is free, and it is a perfect place to begin your park visit.

We took the elevator to the top of the tower stepping out into friendly sunshine and a strong, but warm breeze. As we moved around the circumference Krista pointed out areas and buildings of interest. 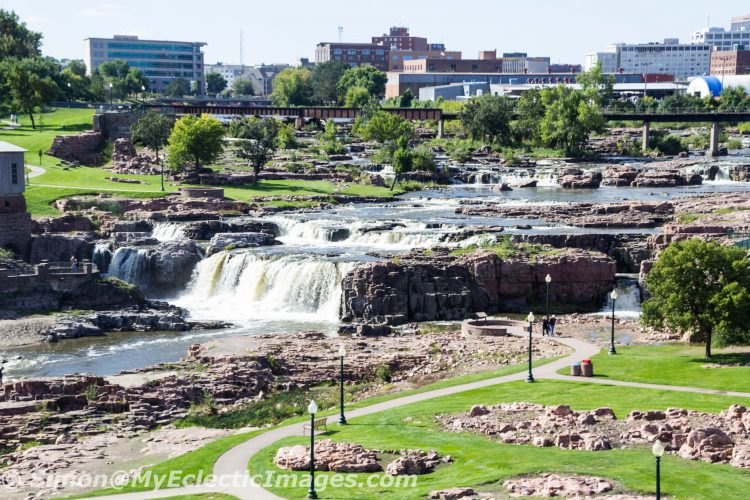 View of the Falls and Falls Park from the Observation Tower 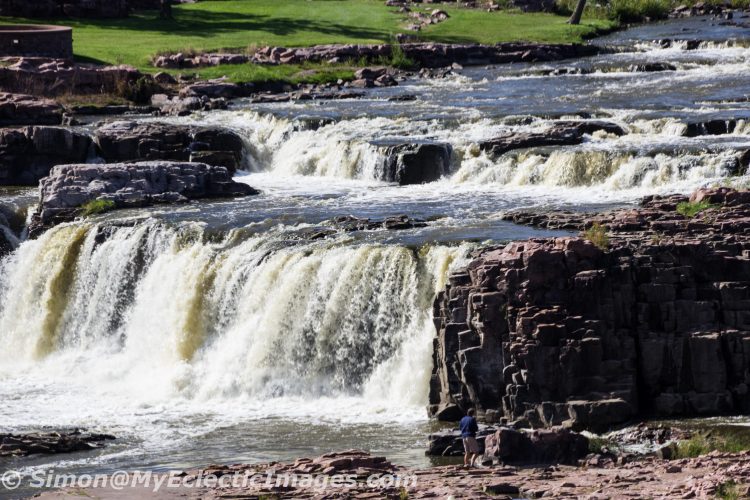 The Falls from the Observation Tower

We marveled at the quarries from which the beautiful native pink quartzite was extracted to build the maximum security state prison that many feel should have been used to build a state university. The decision was purely political, and made for tax purposes. But for the residents of Sioux Falls, there may be a silver lining in that they most likely have the prettiest slammer in the land.

Also from this vantage point, you can see what’s left of the historic Queen Bee Mill, located on the east side of the river that runs through the park.

The mill was built in 1881 making it convenient and cost-efficient for farmers to no longer have to ship wheat to Minnesota or Wisconsin. But two short years later, the mill was forced to close – due to inadequate water power and a dwindling supply of wheat.

Following several failed attempts to make it viable, the mill was finally repurposed as a paint warehouse. But the conversion did nothing to change the structure’s run of bad luck. Early in 1929, the wooden roof and interior floors were destroyed by fire, making it necessary to knock down the upper walls in order to prevent their inevitable collapse. 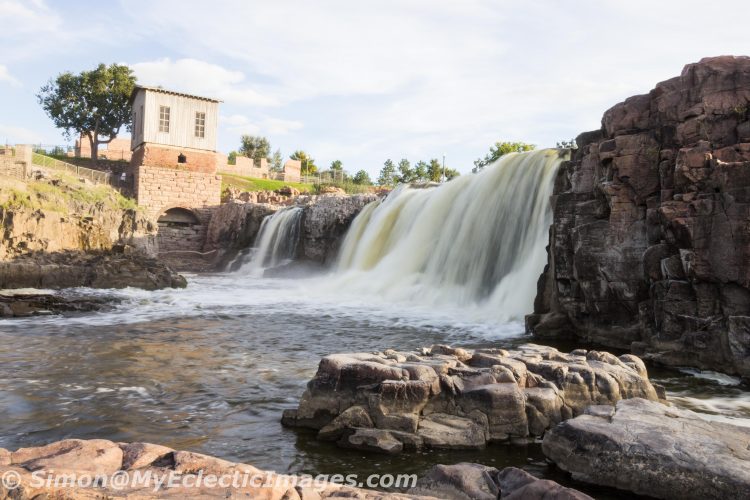 The Mill House and Ruins of the Mill

You also have a good view of the Horse Barn, which was constructed in the late 1800s; purpose unknown. It may have at one time housed quarry horses, or perhaps it had once been part of a creamery. Sadly, there are no existing records to shed light on the question of the building’s original use. Despite the lack of a good accompanying story, the building itself is not without charm.

What we do know is that between 1999, and 2010 the Horse Barn was utilized as an arts center and a venue where artists could work and exhibit their art. Krista expressed her desire that this building would be put to good use in the very near future.

When your eyes land on the Falls Park open air shelter, you will be face-to-face with another structure that adds utility and charm to the park. The venue is used to hold large special events, picnics, and local happenings. With dimensions of 200 feet by 42 feet, a 30 foot wide concrete walk, electricity available at each column and water service at each end of the structure, plus covered and open-air parking, the shelter more than adequately accommodates a weekly Saturday farmers’ market.

Interesting and pleasant as it was, we couldn’t stay up there forever, so we took the elevator back down to get up close and personal with Falls Park. And we definitely got close to the landmark around which the park revolves, standing on the lower observation deck, about 20 yards from the falls towering 30 feet above us. Simon, that perfect shot on his mind, braved the slippery rocks to within 15 feet of the falls. 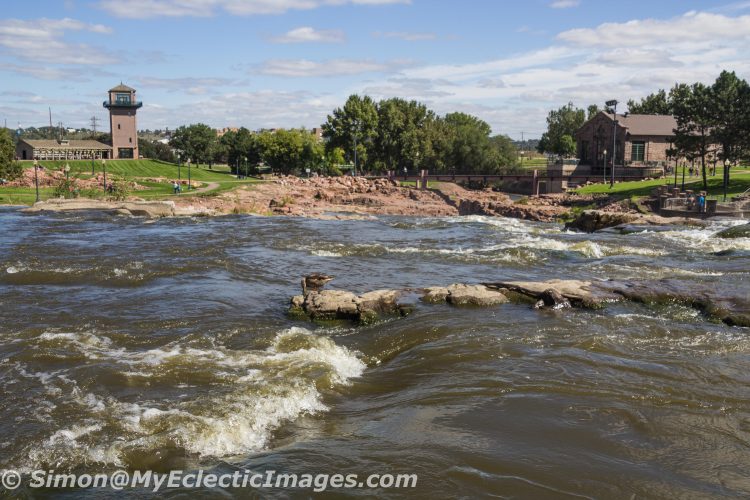 River RunningAway from the Main Falls

The journey of the falls begins at Watertown, approximately two-and-a-half hours north of Sioux Falls. Water from rainfall, melting snow and farm run-off is funneled into the Big Sioux River. Picking up speed as it becomes one with the Big Sioux, it drops an average of 7,400 gallons of water 100 feet over the course of the Falls each second. 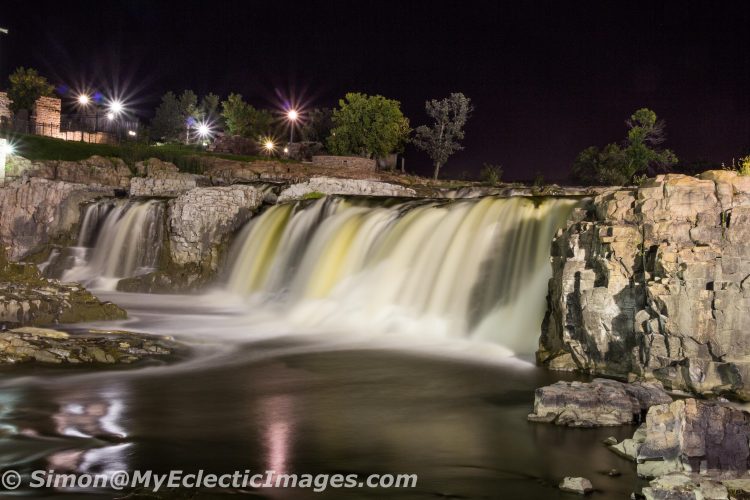 The Falls at Night 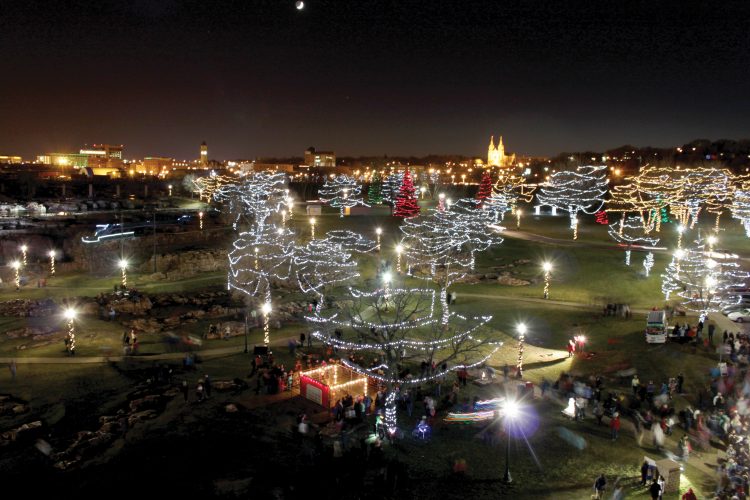 Native Americans were first on the scene, and, to their detriment, told European explorers about the falls. The rest, for better or worse, is history. Since the City of Sioux Falls was founded in 1856, the falls have consistently been central to the city’s recreational and industrial growth.

Today, you can drive or walk “Phillips to the Falls””, a route that will take you from Sioux Falls downtown to the park.

When you arrive, you’ll find Falls Park has much to offer along with its main attraction.

The local visionaries and investors who transformed Falls Park from drab to dynamic are beginning to see the fruits of their efforts in increased local activity, participation and support. Tourism is on the rise, with lovers of art, history and outdoor activities making Sioux Falls a destination City. And the new and vastly improved Falls Park is there to welcome one and all.

They say the best revenge is living well, and on this particular September 11, we did exactly that. Above us, military jets accompanied commercial planes as they approached the nearby airport. And we stood on once derelict ground, recently reclaimed by the brain and brawn of free men and women. Now, that’s what I call a WOW moment.

More information about Falls Park can be found on the official City of Sioux Falls website.