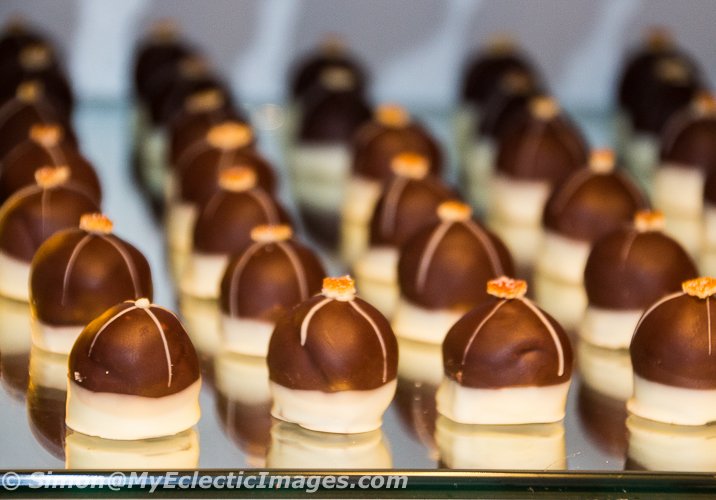 Remember what I once said about looking for the surprises? This is one of my favorite mantras, because the awareness that some unexpected delight might be hiding in plain view, waiting to be discovered, has led me to more than my share of enriching experiences. Well this is a story of one such occasion, and the WOW of an experience it turned out to be.

Simon, Otto and I were visiting Savannah and Tybee Island, GA, gathering material and photos for posting on the blog and pitching to editors about family destination Christmases in three southern venues. Simon had parked the car to photograph the Six Pence Pub, while I stayed in the car to check phone messages and email. Suddenly, he was leaning through the window on my side, and his exact words were, “I’ve just found your next Weekly WOW.”

Entering Chocolat by Adam Turoni, Otto and I stepped on grass. The fake kind, to be sure, but it felt like grass underfoot. And that was the point where the fakery abruptly halted. From the intriguing array of hand-made chocolate treasures displayed in glass-fronted library cabinets to owner and master chocolateur, Adam Turoni himself, everything in the small, cozy store was genuine to the core.

The store had a library theme, right down to the boxes clearly resembling books.

Library Case with Chocolates at Chocolat by Adam Turoni

Unlike traditional chocolate shops, where the pieces are imprisoned in glass cases, Adam’s customers open the cabinets, and remove their own selections with tongs to a tray. Then, the chocolate is boxed. “It really gives you a sensory overload,” said Adam. “When you can pick out your own chocolate and put it on a tray. You really become immersed in the smell.”

Open for just over three months, the Bull Street “library” is Adam’s second store in Savannah. The first store, which resembles a dining room, has occupied its space on Broughton Street – the city’s “main drag” – for three-and-a-half years, satisfying Savannah’s sweet tooth, one whimsical chocolate at a time.

So how did a Pennsylvania boy make his way to Savannah and become a smashing success by the time he was 25? Adam’s interest in food and chocolate began when he was a child. He was encouraged by his grandmother, Theresa Colella, who used to bake cookies with chocolate, and taught him how to work with the glorious substance.

Adam always knew he wanted to be a chef, and by the time he was 17, he was working after school as a pastry chef.

Armed with a scholarship to the renowned Culinary Institute of America, he studied under acclaimed pastry chef and author, Peter Greweling.

It was while in California interning with Alice Waters of Chez Panisse and cook book fame, that Adam was urged by a friend to come to Savannah to seek his fortune, and, just like Forest Gump, that’s what he did.

After five years of working for someone else, Adam decided to put everything on the line, and open his own store.“There was nobody making chocolate here,” recalled Adam. “There was no chocolateur in the entire city, and I took advantage of that.”

Adam feels Savannah was a good choice for a thriving business because of its creative climate. and fascinating stories.”

“Just like the stories,” he said, “every piece of chocolate tells a story to your palate.”

Adam’s way with chocolate is unique. Not only does he fashion stunning combinations of flavor and texture, he applies an artist’s touch to every piece. A collection of snowmen he created for the holidays took nearly a week to craft. Each face is hand-painted with chocolate. Each tiny top hat is hand made. Intricate work like this cannot be rushed.

Whether it’s exquisite angels or chocolates with painted musical notes, Adam’s hands create edible beauty as if they were made for nothing else.

The creativity doesn’t end with chocolate art, though. The atmosphere in which his customers experience his wares is of equal importance. In the same way the Bull Street store resembles a library, the original Broughton Street location resembles a dining room. “We choose small spaces on purpose. We want to make people feel like they’re walking into a home,” he explained. And the “home” theme will expand to other rooms of a house as he adds new locations.

This year, Adam was honored by Southern Living Magazine as one of 24 winners in the first-Southern Living Food Awards for his signature Wildflower Honeycomb Chocolate Bar: dark chocolate with a filling of Savannah Bee Company’s pure raw wildflower honeycomb and decorated with  edible 24 karat gold. Chocolat by Adam Turoni was the only Savannah business in the winners circle.

This was all very impressive, but I had to ask about the trend toward edible gold. “It has no flavor, and only serves to elevate the price of whatever confection it graces,” I opined. “What’s the point other than to look pretty?”

“It’s Bougey,” said Adam, describing the word as meaning something glamorous but ridiculous and over the top.

In order to make his business a success, Adam needed more than his innate talent for creating chocolate. He had to understand food chemistry “and how ingredients work together” in order to develop his traditional and unique recipes.

Then there is the business component; and I’m not just talking about books and budgets. If you don’t have the know-how to keep loyal employees and customers, the numbers soon become irrelevant. Adam shines in both these areas almost as brightly as he does in his intracate edible art. He credits some of his success to having surrounded himself with people who supported him from the outset, which enabled him to build a good team that would be in it for the long-haul.

As for his customers? Well, just look at the careful thought Adam put into the creation of a positive customer experience. “I wanted it to be very whimsical and unique,” he said. “I’m all about the person, and I wanted people to come in and choose their own chocolates.”

Adam’s 72 percent dark chocolate is his best seller, but goes as high as 88 percent in bitterness.

One of the first things Adam learned about the Savannah palate is that it likes chocolate on the sweeter side. The 72 percent appears to have been a good compromise. Perhaps he will refine Savannah taste buds one piece of beautiful chocolate at a time.

All the chocolate is made onsite, and customers can watch it being created in the small kitchen that is visible to visitors. They can watch the brule being bruled, and eat it warm. They can see how painstakingly the decorative process is, and they can observe the filling, rolling, melting and piping that goes into each individual piece of chocolate.

Adam is always coming up with new flavors and styles of chocolate, and is planning to start dabbling in sugar-free versions.

If you haven’t guessed by now, Adam is completely in tune with every aspect of chocolate.  “Each piece has its own story to tell” he said, “it’s almost like I have ADHD when it comes to chocolate.”

Of course, we had to sample some of the art that looked almost too good to eat. The fig and cognac was a smooth creamy chocolate delight. The blend of figs and cognac were an excellent marriage of flavors on the tongue. The fig enabled me to count it as fruit.

Fig and Cognac Chocolates in Production

The caramel with habanero was smooth and sweet with a subtle hit from the pepper at the front end and a slight after-burn at the back of the throat. Naturally, this piece counted as vegetable.

Adam’s chocolate comes at a price. The two pieces Simon and I sampled cost over $5.00. But having read about how these tiny treasures were made, you shouldn’t be surprised or outraged. Think of it as an experience as well as a taste, the time and effort that went into each single piece of chocolate and the outpouring of talent and love of the craft that went into every bite. It’s like eating cheddar from the supermarket on a regular basis, then going to Italy, and nibbling on a piece of black ruffle Tremor. The price is worth the pleasure, and a little goes a long way.

Next time you’re in Savannah, be sure to drop into either of Adam’s stores. Let your senses guide you. They won’t steer you wrong, and you will be WOWed on every level.

Chocolat by Adam Turoni is located at:
126 Bull Street, and;
323 West Broughton Street