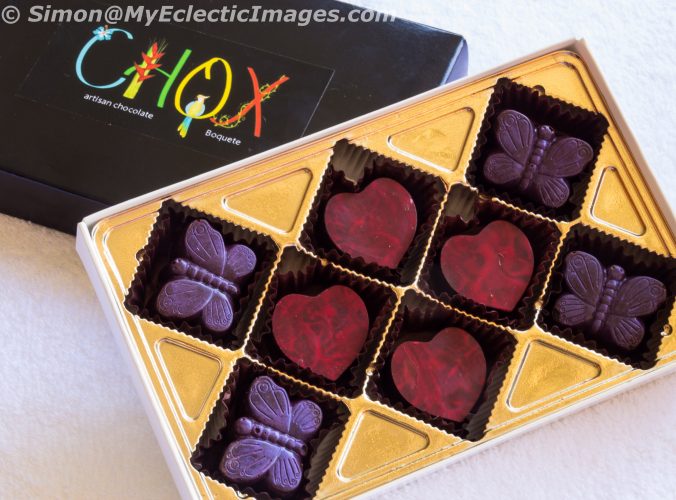 How a Los Angeles Attorney Turned Her love of Chocolate into Profit.

The first time I met Deborah Gershon, she was offering samples of her handmade chocolate from behind a vendor’s table at the weekly Tuesday Market in Boquete. That tiny bite gave such a jolt of pleasure to my taste buds, I had to learn the entire story. And Deborah’s story is as much of a WOW as her chocolate.

An Example of the Chocolate Created by Chox in Boquete (© simon@myeclecticimages.com)

It was February, 2014. Simon, Otto and I were in Boquete for the first time, and making new, delightful discoveries every day. One such discovery took place in Deborah’s home.

With a , “I love what I’m doing,” smile on her face, Deborah gave us the grand tour of her kitchen. Chocolate Central consisted of an assortment of modified equipment the combination of which, with the guidance of Deborah’s capable and loving hands, produced fine chocolate that could rival any of the bigger brands.

Of course, it all begins with the beans. Deborah uses fair trade, organic, cacao beans from the Bocas del Toro region of Panama. Aside from a desire to support Panamanian growers, Deborah chooses these beans for the smooth, texture and low-acidity they bring to the end product.

In the kitchen of her rented home, Deborah first roasted her beans in a table-top convection oven; then used a juicer to crack the shells in order to expose the meat.

To separate the meat from the shells, Deborah employed a homemade contraption she saw on the internet, and had commissioned specifically for the winnowing process. It consisted of a shop vac, a five-gallon container, a funnel and some PVC tubing. Innovative, and highly effective. This was the second incarnation of the winnower, the first having been a hairdryer with a long tube.

After all the meat had been separated from the shells, the real chocolate-making began. Deborah used a wet grinder, modified for chocolate. At this stage, sugar and cacao butter were added, and the grinder ground along for 10 to 12 hours, until the contents was the consistency of melted chocolate chips.

The basic chocolate mixture was then tempered using an infra red thermometer, after which it was cooled. This was the consistency for Deborah’s chocolate bars.

For her truffles, the tempered chocolate was remelted, flavorings were added, the mixture poured into molds coated with a thin layer of bitter-sweet chocolate, chilled and covered with another thin layer of chocolate. Once hardened, the truffles were turned out, ready for boxing.

We bought a box of Deborah’s assorted truffles to try. They were nothing short of delicious. My favorites were the pineapple rum truffles, and the ones with a breath of lavender, which gave the chocolate a soft, subtle flavor that was soothing to the palate.

Deborah discovered her interest in handmade chocolate while still in Los Angeles (LA), working as a mortgage litigation attorney. Seeking an interest/hobby outside her work, Deborah felt she needed a ‘left brain’ creative activity. “I couldn’t paint, draw, dance or carry a tune,” she chuckled. I too, chuckled, because it sounded as if she was describing me.

Deborah Gershon, the Founder and Owner of Chox in Boquete (© simon@myeclecticimages.com)

Once she embarked on her chocolate making career in 2009, Deborah found that there was a demand for the good stuff. So she began selling the fruits of her left brain efforts at a market in LA.

Then Deborah began looking at her future retirement, and set out to see where she might like to live. After exploring Costa Rica, Deborah found herself driving through the town of Boquete in Panama’s Chiriqui Highlands. “I fell in love with Boquete that first time” she recalled. “It was the beauty – Costa Rica was beautiful, too – but it was also the charm and sense of community.” It was then Deborah realized she could just as easily telecommute from Panama with the Chicago firm for which she worked as she had been doing from LA.

Deborah decided she didn’t need to postpone her retirement, and moved lock, stock and chocolate-making equipment to Boquete in 2013.

Fast-forward to 2015, and Deborah had expanded her business to a small shop in downtown Boquete, while still selling her expanded line of fine chocolate at the Tuesday Market.

For Valentine’s Day, 2016, Simon gave me a box of Deborah’s “Hearts and Butterflies” chocolates. The hearts were filled with marzipan and chopped cherries. they were insanely scrumptious. As for the butterflies, we haven’t tried them yet, wanting to stretch this guilty pleasure out as far as we can. After all, the bigger the WOW, the longer we want it to last.