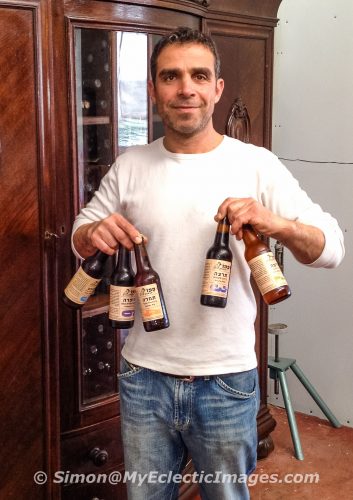 Moti Bohadana’s Unique Way of Honoring the Women in His Life.

There are many nations that come to mind at the mention of better-than-average beer: Ireland, England, Germany, the Czech Republic and, thanks to the proliferation of microbreweries, the United states, to name a few. But Israel? It would have never entered my mind until my cousin took us to meet Moti Bohadana. His beers, their names and the stories behind them all belong to an unexpected WOW experience.

When we arrived at Pepo Brewery, Moti was waiting for us, smile on his face and bottle opener in his hand. We learned from my cousin that Moti had named each of his eight beers for an important woman in his life. Each beer told of the personality of its namesake. Golda, named for Moti’s mother-in-law, was a soft, subtle Scottish ale. Tirza, a teacher who had a strong impact on Motti, was represented by a dark stout. Strong and powerful. this beer was indicative of a sturdy, dominant woman. I have no idea if Tirza was also stout.

Moti named the Indian Pale Ale (IPA) for his grandmother Elisheva, who had a tragic and difficult life in Jerusalem, long before Israel became a state. Widowed at a young age, Elisheva raised nine children on her own. Her beer was a hard, bitter, drink, but full of flavor and character.”

Moti, who moved from the north of Israel, began as a wine-maker 15 years ago. He soon realized the Israeli summer heat could prove to be even more lucrative if he offered cold, refreshing  beer as well.

With this in mind, he built Pepo Brewery, naming it after his father, a restoration carpenter who contributed to the project by transforming an existing chicken coop into the brewery and tasting room. Moti, utilizing his experience as a sign-maker, did the welding for the stainless-steel equipment.

And so, we passed a most pleasant afternoon sampling Moti’s beers and chatting. But our host wasn’t content with serving us his feminine brews. He placed platters of local artisan cheeses, fresh breads and sweet, delectable locally grown vegetables in front of us. Of course, it would have been the hight of bad manners to refuse to partake.

Which beer did I like best? It was a tough choice, but my favorite was Alma, a light and gentle wheat beer, named after Moti’s charming fair-haired young daughter. I’m partial to wheat beers, and this one was mild and refreshing as the spring day we were enjoying. And a WOW of a day it was.

Pepo brewery is located west of Jerusalem, on Moshav Tzelafon, near the Nahshon junction. Following the signs to the Navot Winery will take you there. For, more information, in Israel call 02-999-2291 or email info@navot-winery.co.il.