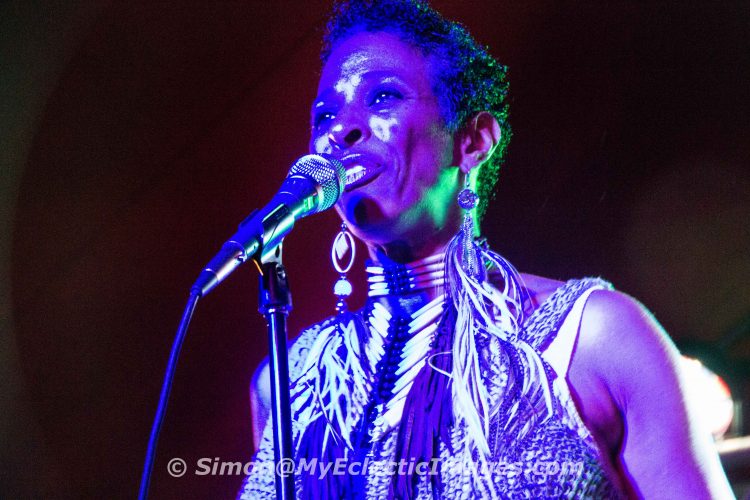 How Opening Your Ears Can Open Your Mind.

“There’s too much blues and not enough jazz,” I complained during the 2015 Boquete Jazz and Blues Festival. That was until the 2016 10th Anniversary event, when I had the opportunity to hear Shakura S’Aida unplugged in a small theater, and WOW, did I change my mind in a hurry!

Shakura in Concert at the Boquete Community Playhouse (© simon@myeclecticimages.com)

Simon and I met Shakura briefly last year, when we were Green Room volunteers for what is known as, “the biggest little jazz and blues festival in the world.” She stopped in front of the window above the sink where I was washing dishes for Simon to take back for reuse in the Green Room.

We had a short chat, and my impression was that Shakura was as real and down-to-earth as Deanna Bogart, who I had the pleasure of interviewing earlier that afternoon. Of course (may I be forgiven), I had paid no attention to the music emanating from Shakura’s performance as it drifted through the window. I didn’t care for blues. Remember?

Shakura and Deanna were so enamored with their first experience with both Boquete and the festival, which raises funds to provide musical instruments for local school children, they signed up to be associate producers for the 2016 event. And that is why we met Shakura at the Tuesday Market a week-and-a-half before the festivities officially began.

Once again, she was so likable, I decided then and there to purchase a ticket for her unplugged concert at the Boquete Community Players (BCP). After all, I really did want to hear her sing.

The night of Shakura’s performance, Simon and I made our way into the theater early, as he was was one of this year’s official photographers. Once settled, I began to wonder how Shakura would do onstage, because she had lost her voice entirely several days earlier, and was fighting the virus that had taken hold at the worst possible time. Then she began to sing, and both Simon and I were hooked.

Shakura ripped, belted and moaned the blues, hitting each note flawlessly, and, on occasion, sounding like a softer Aretha Franklyn. If she hadn’t turned aside from the microphone to cough several times, no one would have known she was having difficulty with her voice.

The songs ranged from humorous to serious and thoughtful. Shakura regularly interacted with the audience; making us laugh, ponder and occasionally join in. The 90 minutes sped by, as my mind emptied of thoughts in order to absorb the lyrics. I’m a sucker for great lyrics, and each song had a theme, mood and message all its own.

Born in Brooklyn, NY, and raised in Switzerland, Shakura now makes her home in Toronto, Ontario. Not only is she skilled in performing all facets of the blues, from Billie Holiday to cutting-edge modern, she can also speak French and Swiss German.

Thus far, Shakura’s career has spanned three decades, and has seen some impressive milestones. She has been consistently nominated for multiple music awards, and was the winner of the 2011 Maple Blues award for Best Female Vocalist, and the 2011 Independent Music Award for Best Blues Artist. She has performed in countries around the globe, and has graced some of the world’s most prestigious venues.

Despite stardom and international acclaim, Shakura is grounded in the reality of today’s world. Her mother had been active in the early days of the Civil Rights Movement, which had a profound impact on the artist. It pains her that today’s young people seem to be unaware of the oppressive indignities experienced, and difficult sacrifices made, by previous generations.

Up to my elbows in suds, I listened to two afternoons of extraordinary performances taking place in the Valle Escondido Amphitheater. To my surprise and delight, Shakura stopped at my window several times to chat. During those interludes between washing and drying dishes, I became aware of the quiet strength, and underlying vulnerability, that make her music and lyrics so believable. It is a genuine privilege to know artists like Shakura and Deanna as people first and then as talented musicians.

Shakura Performing with Lee Oskar at The Rock in Boquete (© simon@myeclecticimages.com)

Shakura Performing with Lee Oskar at The Rock in Boquete (© simon@myeclecticimages.com)

My heartfelt thanks go out to Shakura S’Aida for opening my mind to a musical genre I had chosen to ignore for far too long. During the two-day festival, along with four nights of jams at local restaurants, I tuned in to harmonica great, Lee Oskar, and singer Andy Egbert. And my blues explorations won’t end there. It’s never too late to let something new into your life, and allow yourself to revel in the continuous discovery. This experience provided further confirmation that the best WOWs are yet to come.

Shakura Performing at The Rock in Boquete (© simon@myeclecticimages.com)

You can find Shakura S’Aida’s discography on her website. I would also encourage you to visit her FaceBook page and give her a ‘like’ while you’re there. I did.