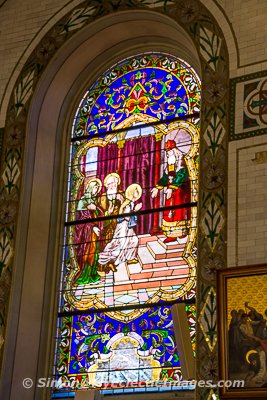 Montreal’s Oldest Chapel Offers a Peaceful Refuge for All Who Enter.

Stepping out of the hot afternoon sun into the cool tranquility of Bon Secours Church was like stumbling upon an oasis in a desert of chaos. And the cloak of quiet calm that enveloped me as I sat in a pew resting my tired feet was a special kind of WOW.

It was Labor Day weekend, and the crowds were thicker than a French Canadian pea soup. Simon, Kevin, Otto and I had come up to visit my mother in her nursing home, and the sadness of watching her slipping deeper and deeper into Alzheimer’s weighed heavily on our hearts. During her afternoon nap time, we decided to explore Old Montreal.

Although I had grown up in Montreal I had never been inside either Notre Dame Basilica or the church know as the “Sailor’s Church”, Bon Secours. This was about to change.

Despite the heat and crowds, we managed to find a parking space less than a block away. As far as I was concerned, this was a very good omen, and that’s exactly what it turned out to be.

Notre Dame de Bon Secours – Our Lady of Good Health – is a small church located near the old port of Montreal. Constructed atop the ruins of the original church in 1771, this Norman-Gothic structure became a place of refuge and thanksgiving for 18th and 19th century sailors who survived the treacherous trans-Atlantic crossing from Europe. It was also where sailors’ families came to pray for their loved ones still at sea.

The connection between Bon Secours and generations of sailors is immediately evident upon entering the chapel. Carved wooden replicas of sailing ships hang from the vaulted ceiling, and a plaque bearing the Latin inscription, “Pray for us fishermen in the hour of our death,” hangs on the wall.

A Model Ship Hanging from the Ceiling in the Bon Secours Church in Old Montreal (© simon@myeclecticimages.com)

The two cameo paintings by Ozias Leduc on the back wall are of particular significance. . The portrait of Paul Chomedey de Maisonneuve, founder of Montreal, and one of my heroes from sixth grade history, donated the land on which the original chapel was built.

The other portrait is of one of Montreal’s most cherished ancestors, Marguerite Bourgeoys. She was the first teacher in the growing colony, and founded the Congregation de Notre-Dame.

So strong was Marguerite Bourgeoys’s faith, that in 1655 she became the driving force behind the building of a chapel close to the banks of the St. Lawrence River.

In 1672, Marguerite returned from a voyage back to France, bringing with her a wooden statue of Notre Dame de Bon Secours, which was placed in the chapel upon its completion in 1678. Today, it can be seen in the church’s reliquary.

In 1754 fire consumed the chapel, and burned it to the ground. Miraculously, the wooden statue, and reliquary that housed it, lived up to its name. Both were discovered among the ruins, unmarred and intact.

Excavations are ongoing below the chapel, which has been designated as an archeological site. Discoveries include First Nations and French colonial artifacts, and the foundations that supported the original 1678 chapel.

Considering the heat and our need to return to my mother, we decided to forego climbing the church’s spire to take in views of the Old Port and Saint Lawrence River. My wish is to return to Notre Dame de Bon Secour Chapel, climb the spire, take my time exploring the museum and the dig site and spend a few moments just sitting in the church. I know there will come a time when I will need the comfort of that cloak of peaceful calm. And what a welcome WOW that will be!