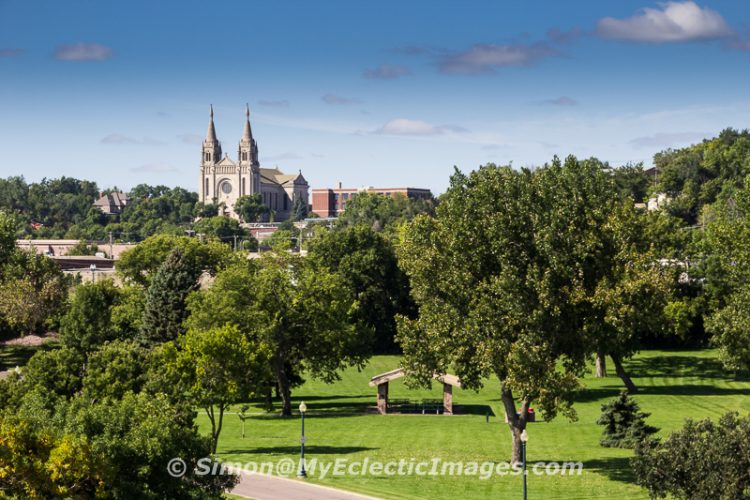 No Matter How Many Cathedrals You’ve Seen, This Midwest Treasure Should not be Missed.

Late on a warm September afternoon, Simon, Otto and I found an unexpected WOW, when we entered what I thought was just another big church.

The Cathedral of St. Joseph was first pointed out to us the previous morning as we drank in the stunning views from atop the tower at Falls Park. The building graced the Sioux Falls skyline, standing tall and serine on a hill above its neighboring structures. We were encouraged to pay the church a visit more than once, so that was what we did.

Having seen countless medieval churches in the U.K. and Europe, I confess (no pun intended) to having felt a bit smug walking into a cathedral that was less than a century old, but the smugness was soon banished by the brightness of the interior, and the warm sensation that enveloped me. Decorative Detail on the Vaulting in St. Joseph Cathedral (© simon@myeclecticimages.com)

We had arrived shortly after the conclusion of a service, and several worshipers were still in the church. Noticing our International Travel Writers and Photographers Alliance (ITWPA) badges, a friendly parishioner approached us and started a conversation.

She was unashamedly proud of her church, and took the time to show us around, answer our questions and introduce us to the priest.

We learned that a major 15-year-long restoration of the cathedral had been completed in 2011. The architect, Duncan G. Stroik, gave St. Joseph an artistic overhaul. Structural work, replacement of electrical wiring, sound system, lights, heating and air conditioning were also completed. By the conclusion of the project $16.2 million had been invested in the massive reconstruction.

Stroik stayed true to the plans of Emmanuel Masqueray, St. Joseph’s original architect, who died before the completion of the church in 1919. Stroik had the walls repainted to soften the whitewashing used during a 1970s makeover. He also insisted upon reproductions of the ornately carved wooden confessional booths that had been removed during that same decade, and ordered the replacement of the uninteresting stone floor with marble.

Prior to this most recent renovation, the cathedral had undergone subtle, but significant changes since its opening in 1919. In The beautiful Kilgen pipe organ was installed in 1935. There is a magnificent round stained glass window above the organ that is worth more than a passing glance.

Rose Window Above the Organ in St. Joseph Cathedral (© simon@myeclecticimages.com)

In 1942. a fire damaged the cathedral, and the interior had to be redecorated the following year. Frosted glass was replaced by French stenciled stained glass windows in 1947. Between 1970 and 1974 – around the time of the white-washing of the walls – the free-standing altar we see today took its place as a prominent feature of the cathedral.

Steps lead to the altar, which is graced with a magnificent ornate gold canopy supported by four green marble columns. The semicircular apse behind the altar is bathed in colored light from multiple stained glass windows.

We were fortunate to have been able to spend time in the Sacred Heart Chapel, which became a place for small weddings and private worship in 2004. Although it is a peaceful place for quiet reflection, the chapel is less than photo-friendly, which turned out to be a source of frustration for Simon’s camera.

Before we left, the kindly priest gave us a book tracing the history of the cathedral, which we will always treasure. This special souvenir of our time in the Cathedral of St. Joseph will serve as a reminder that all cathedrals are not created equal, and even a relatively new church can constitute a major WOW.