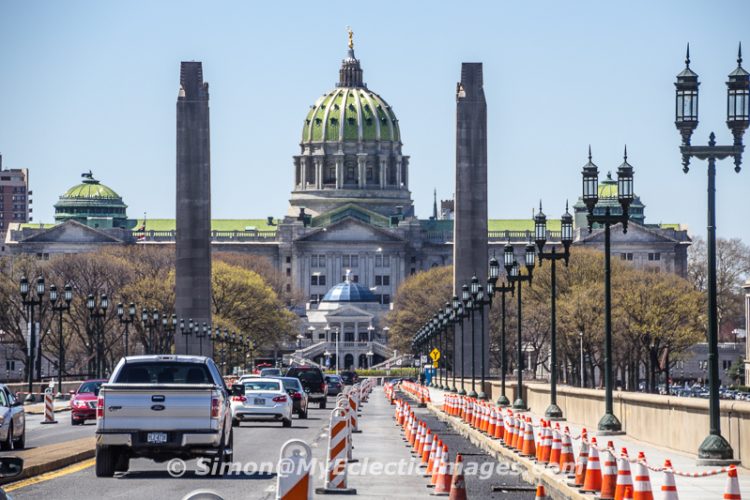 Stained Glass, Marble and Gold Leaf Make This Historic Structure a Feast for Eyes and Mind.

It didn’t matter who might have been looking. I had to slip off my shoes to stand on the plaque marking the spot where President Theodor Roosevelt proclaimed, “This is the handsomest Building I ever saw.” It was 1906, and the U.S. President who is one of my all-time heroes was in Harrisburg, PA for the dedication of the new State Capitol Building. Now, I can truly say I have something in common with this great man. We both were WOWed by the experience of being in this grand building.

View of the Capitol (©simon@myeclecticimages.com)

Upon our arrival at the Capitol, we were greeted by our guide, Jill Fetter, Director of Capitol Visitors Services. For the next hour, she made every area we visited come to life through her historical narrative, vivid descriptions and genuine love of the building and all it contains.

We began our tour in the fourth-floor rotunda, where we learned about the history of the building. Interspersed among historical facts were descriptions and information on our surroundings.

Of course, there was the magnificent dome, patterned after St. Peter’s Basilica in Rome, and over half its size. Four massive columns supported the dome. Each bore a medallion representing one of the four forces needed to uphold a civilization: science, art, religion and law.

View of the Inside of the Capitol Dome (©simon@myeclecticimages.com)

Medallion under the Capitol Dome (©simon@myeclecticimages.com)

The cast bronze light standards were adorned with detailed patterns, and topped with cut glass globes. The pattern of Xs in the glass weren’t intended to represent anything mystical or sinister. The were put there because at the turn of the century, the light bulbs only gave off 25 watts. This patterning in the glass refracted the light, in such a way that it appeared brighter than it actually was.

Lamp Standards on the Second Floor of the Capitol (©simon@myeclecticimages.com)

Gracing the walls that had been pealed back to show their original canvas-like surface and stenciling, were paintings by Pennsylvania artists. Ornately carved wood accents were to be found everywhere. But what amazed me was the amount of marble in the rotunda alone. Most of the marble was from Vermont, along with the granite exterior, but the treads of the grand staircase, which was inspired by the one at the Palais Garnier in Paris, were solid Carrara marble. The substance had been chosen for its durability, and the tax-payers of Pennsylvania definitely got their money’s worth. More than a century later, the stairs look like new.

From the rotunda, we moved to the Senate Chamber, followed by the larger House Chamber. Each room was unique, but like two siblings, they had a common foundation.

Both had stained glass windows that cast their colored light over the men and women who’s decisions affect the lives of all Pennsylvanians. The desks were mahogany, and the walls were covered with murals. I couldn’t help thinking what a privilege it must be to work in such an environment of artistic and architectural beauty.

Example of Stained Glass in the Pennsylvania Capitol Building (©simon@myeclecticimages.com)

Example of Stained Glass in the Pennsylvania Capitol Building (©simon@myeclecticimages.com)

Both chambers had large, sparkling chandeliers of hand-strung glass beads. Each was fitted with a cylinder designed to enable a six-foot man to stand and change light bulbs, as well as clean the glass. This task is performed every three years, and involves the placement of scaffolding above the desks of the lawmakers.

Unique to the House Chamber, is the marble. Mined from a quarry in the French Pyrenees. The quarry was closed after this extraction, making the beige marble, swirled with black and light tan, a rare commodity.

With 203 House Representatives and 50 Senators, Pennsylvania has the second largest legislative body in the country. This Legislature is in session throughout the year

Our last stop on the fourth floor was the State Supreme Court. The Chamber was a stunning combination of textures. The two-ton chandeliers were present, along with cast  bronze statues, and light standards, a stunning stained glass dome bathing the room in natural light, ornately carved wood with gold leaf, and a magnificent clock. This was one of 230 original time pieces located throughout the building. With the exception of the dome, I had the opportunity to touch all of it.

The Stained Glass Dome in the Pennsylvania Supreme Court (©simon@myeclecticimages.com)

My fingers had a field day exploring the patterns in bronze and wood, but the clock was the piece de resistance. With its beveled glass, carved keystone and fine detail, I ran my fingertips over smooth wood and elaborate carving. All the while, the gentle ticking of the clock drew me in even deeper. Jill told us that it takes a man two entire days to make his way around the building winding all the clocks.

Time Piece on the Back Wall of the Pennsylvania Supreme Court (©simon@myeclecticimages.com)

The magnificent structure we see today is the third incarnation to stand on this site. The first was designed by architect, Stephen Hills, and was completed in 1822. It was visited by many national and international dignitaries. It was in this building that President Abraham Lincoln lay in state following his assassination in 1865. Unfortunately, the building burned to the ground in 1897.

Some of the Detail Covered in Gold Leaf in the Rotunda of the Pennsylvania Capitol (©simon@myeclecticimages.com)

The next architect to step up to the plate was Henry Ives Cobb. Although the State Legislature met in the incomplete building in 1899, the consensus was they hated it. In fact, even Cobb admitted it was ugly. Funding was withdrawn from the completion of the brick building that looked more like a factory than a Capitol building, and it was back to the. drawing board.

In 1902, construction was resumed under the watchful eye of Joseph Miller Huston. Like his predecessors, Huston acquired the commission by winning a competition, and this time, the building that was dedicated in 1906 would not only endure, it was magnificent. More than a structure to house lawmakers, it was an art palace.

Themes of religious freedom, the rule of law, agriculture, industry and creativity are interwoven throughout the building. Many of the paintings are worthy of more than a passing glance, but the works of Violet Oakley stood out for me, particular two hanging on the walls of the Supreme Court. One was similar to a word-search on canvas. Bold yet whimsical, ‘love’, ‘law’ and ‘wisdom’ can be found by carefully studying the painting.

The other was of William Penn, sitting at a desk. In an early version of “Where’s Waldo” you can see the artist’s self-portrait in one corner.

Our tour ended in the lobby, where I stood where TR had stood. The rest of the expansive floor consisted of 400 picture tiles joined by patches of smaller tiles, which gave it it’s slight unevenness. The picture tiles displayed scenes of early transportation, agriculture, insects, butterflies and animals.

When you visit the State Capitol building in Harrisburg – note, I didn’t say ‘if’ – be aware that spring is one of the busiest times for tours, due to the increased number of school field trips. In fact, we had the pleasure of listening to one of the Capitol’s 10 paid full-time docents explain the Court to a group of Amish students. It was comforting to know that, at least in Harrisburg, children are learning something about how our government works, incredible beauty in art and architecture, and that the two are not necessarily mutually exclusive.

The time passed all too quickly, and when we left Jill, we were filled with admiration and inspiration. There is nothing like a professional, knowledgeable tour guide to send you off feeling like that. There is much to see in Harrisburg, PA, and there are many WOWs to be discovered. But if you see nothing else in this historic city, make sure you take the time to allow the Pennsylvania State Capitol Building to Wow you like you’ve never been Wowed before.

Guided Tours are free, and are offered every half-hour from 8:30 AM to 4:00 PM, Monday-Friday. On Saturdays, Sundays and most holidays, tours are available every two hours from 9:00 AM to 3:00 PM. Be sure to call ahead in order to check availability.

Bronze Panel on the Entry Door to the Pennsylvania Capitol Building (©simon@myeclecticimages.com)

Statues Gracing the Entry Stairs to the Pennsylvania Capitol (©simon@myeclecticimages.com)

The State Capitol is located in downtown Harrisburg on North Third Street, across the street from the Pennsylvania State Museum.

While in Pennsylvania, we were hosted by Visit Hershey-Harrisburg. However, all opinions are entirely my own.