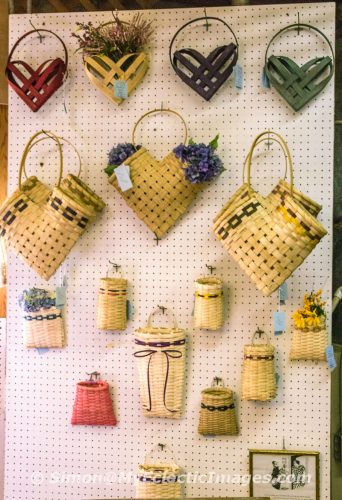 Skills that Stand the Test of Time and Technology.

When we were told our first stop during our visit to the Amana Colonies would be a demonstration in broom making, I wasn’t sure what to expect. After all, I loathe anything to do with cleaning. But when we walked into West Amana Broom and Basket Shop, my temporary trepidation was replaced by a sincere WOW.

David Miller, who volunteered to be our guide to Amana Colonies, was knowledgeable, helpful and enthusiastic about the place he and his wife chose to call home over a decade ago. Among the many courtesies he bestowed upon us, was arranging for us to meet some of the people who work and live in the colonies. You’ve already met Doris Hahn, the phenomenal baker,  and now you are about to meet Joanna Schanz, broom and basket maker extraordinaire.

When we entered the shop, David ushered us to the back, where Joanna was sitting on a high stool at a broom winding machine. It’s commonly called a ‘kicker’, because you, well, kick it.

Supplies Laid Out to Manufacture a Broom (©simon@myeclecticimages.com)

Starting to Build a Broom on the Kicker Machine (©simon@myeclecticimages.com)

The machine originally belonged to Philip Griess, a blind broom-maker for Amana Colonies” before during and after the Great Change, when Amana Colonies chose capitalism over communal living. As we chatted, Joanna drilled, kicked and hammered bristles, wire and wooden handle into submission. . It was surprising the amount of fine motor skill needed in the broom-making process. The shoulder broom on which she was working took approximately 20 minutes to produce, and that included the hand-stitching. It would have taken me 2 hours, and the results would have landed on the trash heap.

Building a Broom on the Kicker Machine (©simon@myeclecticimages.com)

Joanna and her husband, Norman, opened the shop in 1972, and have been providing locals and tourists with the kind of quality that has come to be expected from all hand made items produced in the Amana Colonies.

Joanna makes a lot of the baskets sold in the shop, but she is now also busy making brooms, following the recent retirement of the last broom maker at 93. She will continue in this capacity until a new broom maker can be trained.

A manual was created by a previous broom maker, and hands-on training will make the process an uncomplicated education. “After all,” noted Joanna, “there’s not too many ways you can make a broom.

The shoulder broom is one of four types made and sold in the shop. There is also the sideliner, which was used to sweep crumbs from giant bread boards when the colonies were a communal society with communal kitchens and dining rooms. Today, the short-handle models are good for sweeping fireplace hearths, and the long-handle brooms are useful for dispensing with high cobwebs.

Selection of Brooms Made in Amana (©simon@myeclecticimages.com)

The witch’s broom is round with a stiff center, enabling it to stand. One version of this broom is flattened at the top, and is used for sweeping snow. And no, it doesn’t come with flying lessons.

Selection of Brooms Made in Amana (©simon@myeclecticimages.com)

Also available are Pot Brooms, once used to clean out cooking pots and kettles. Nowadays, they make unusual decorative items and can also be used to sweep rug edges, and to get into those hard-to-reach places like behind and under furniture.

Before we left the shop, I took the opportunity to become acquainted with some hand made willow baskets. A German-style work basket caught my attention. It had a smooth finish, but the color and texture were all natural.

Joanna told us that cultured willows are grown and used specifically for basketry. They are not dyed or painted, and the smooth textures come from peeling the raw material.

These baskets have a raised rim around the lower perimeter to protect the bottom of the basket, and to provide stability. These rims, along with the handles take a lot of wear and tear. Fortunately, they can be, and are, replaced, increasing the longevity of the basket.

The entire shop. is haphazardly stocked with fetching displays of baskets, brooms, wooden items such as spoons and other handmade must-haves enticing you from every aisle. I accidentally disturbed a large set of wind chimes, and the most mind-mellowing sound filled the shop.

It would have been easy to wander and chat for hours, but Joanna, who was gracious enough to give us far more of her time than we deserved, needed to return to her work. And, thanks to David, we had much more to see.

Some WOWs grab you and don’t let go. Others are subtle and make an indelible impression. But the WOWs we witnessed in West Amana Broom and Basket Shop, swept us off our feet.

Are you a sucker for all things hand made? What are some of the most memorable items you have seen and/or own? Let us know in the Comments.