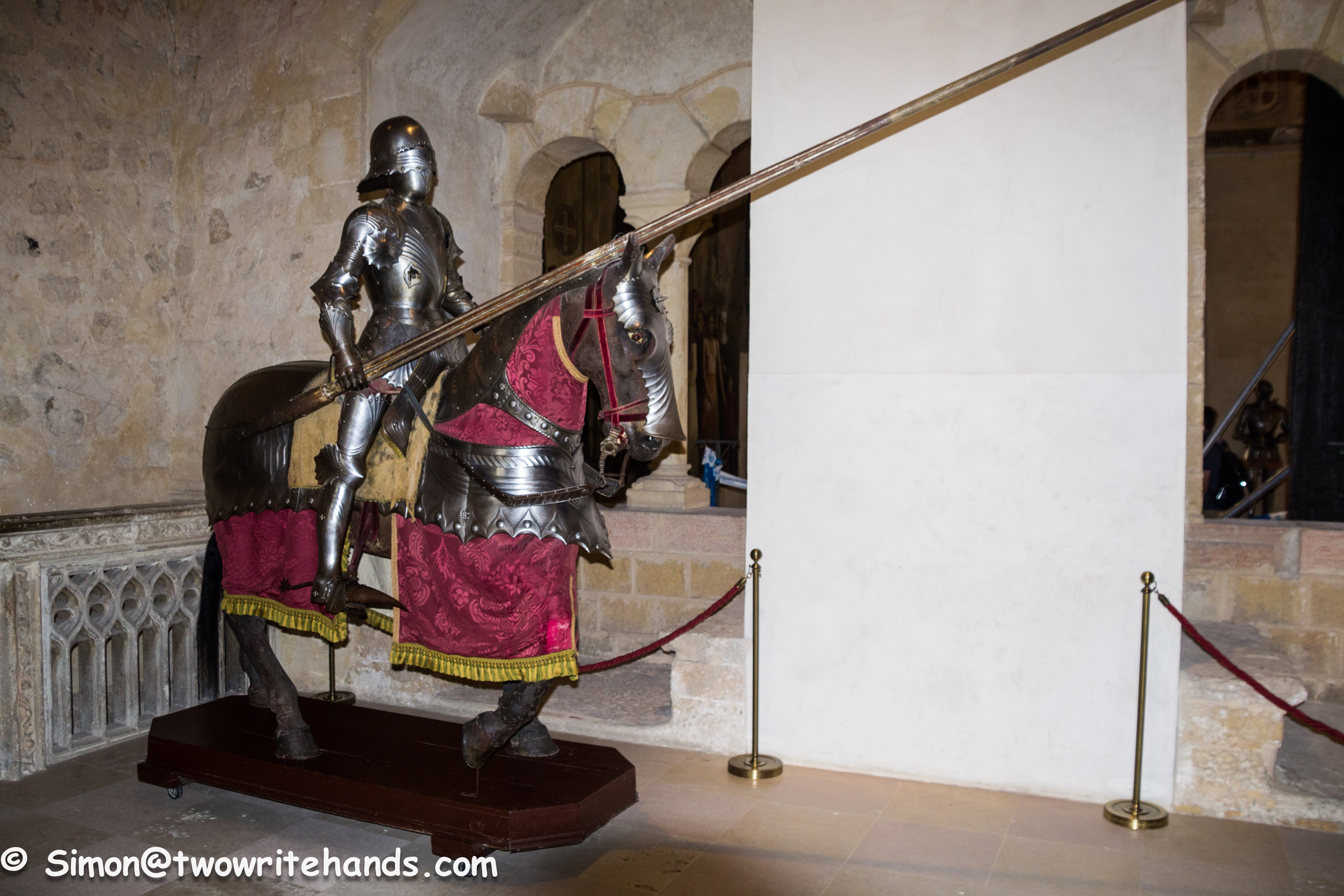 The Parapets of Segovia Castle

Once a castle, always a castle? Well, not necessarily. The Spanish town of Segovia is home to a historic structure that has lived several lives over the centuries. In its present incarnation, the Alcázar de Segovia (Segovia Castle) is positively WOW-inspiring.

In August of 2014, Simon, Otto and I were in Madrid for several days before returning home after a month in England and Spain. Deciding to stay in one place, we took day trips with the help of Spain’s high speed trains. That is how we found ourselves in the magnificent town of Segovia. One day was far too short to do this gold mine of history and architecture justice, but we gave it our best shot.

Our first encounter with Segovia was with a gypsy woman selling hand-crocheted beaded shawls. Thinking a particular brightly-colored wrap would make a perfect birthday present for a dear friend, we negotiated a price. Once she put the shawl in the bag, however, the woman decided to double the cost. That didn’t go down well, so we paid her the original agreed-upon price, picked up the bag and left. Looking back, I think that what I felt was more disappointment than anger.

I tell this story not to suggest to you that all gypsies in Spain are devious, but to warn you that, especially in the visiting of a major tourist attraction, this sort of thing can happen.

Despite the attempted bate and switch, this story had a happy ending. My friend loved the shawl, and that made the temporary aggravation definitely worthwhile. Now, back to the castle.

The first thing you notice is that the, Alcázar, located near the Guadarrama mountains, sits proudly on a large outcropping of rock that resembles the bow of a giant ship. Below, runs the Rio Eresma, whose gently flowing waters meet the Rio Ciguinuela in the heart of Segovia, Since the days when The Romans established the town, and constructed the amazing aqueduct, the defensible location where the castle now stands has represented security and growth for Segovia’s inhabitants.

It is believed that the Moors from North Africa built the fort out of wood on what was left of the Roman ruins. After they were driven out in the 12th century by Iberians from the area now known as Northern Spain, the first constructs of the Alcazar were erected.

Most of the rooms available for viewing today were built by Fernando III and Alfonso X. in the 13th century. During the middle part of the mid, 15th century, another building frenzy commenced, and the final major additions were completed in 1587. 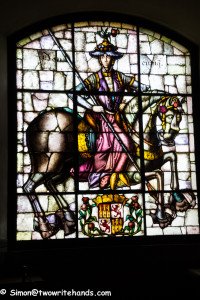 Stained Glass within the Castle

The Alcazar began to morph into a palace and a place of ceremonial significance, when in 1474, Isabella was crowned Queen of Castile and León.

When the royal court moved lock, stock and throne to Madrid, the castle became a state prison and remained a place of incarceration for nearly 200 years. Then, in 1762, King Charles III founded the Royal Artillery School, which remained in the castle for close to a century. But in the spring of 1862, fire raged through the Alcázar, causing serious damage to the roofs of the treasury, keep, armory, sleeping quarters, and framework. 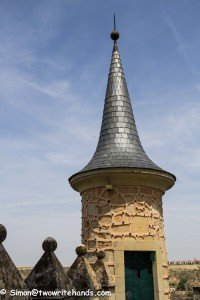 It took over a decade to restore the Alcázar to a semblance of its original grander. A 1896 order from King Alfonso XIII made it the property of the Ministry of War to be used as a military college.

It had been rumored that the Alcázar was the inspiration for Cinderella’s Castle at Disney World in Orlando Florida. There’s no concrete evidence to back this up, but it’s not outside the realm of possibility, and it mades for a good story. 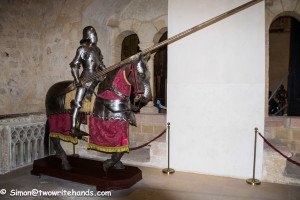 Armor on Display at Segovia Castle

Today, the castle is a museum and popular tourist site. For me, though, it was one of those precious opportunities to take a wander into the past, complete with a moat, two courtyards and a 262 foot tower.

We meandered up concrete ramps, and gazed down at the views of the city below us. There were about a dozen rooms that open off the courtyards, inviting us in to explore their secrets. There was armor worn by men and horses, and there were delicate ornaments, and other artifacts that recalled the glory of the Alhambra, having been crafted by 14th century Arabian workmen. 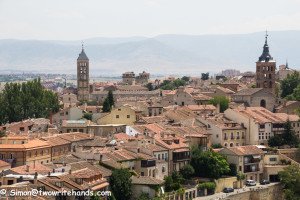 View of Segovia from the Castle Tower

The Tower of Juan II, silently beckoned Simon and his camera to climb its 156 crooked steps, and take in a stunning view of Spain’s countryside. And, of course, Simon couldn’t resist answering the call.

Otto and I sat this one out because of the condition of the steps, so we hung out, enjoying the diverse impressions offered by the castle’s atmosphere.

As far as castles go, Alcázar is definitely not a one trick pony. Its unique history alone makes it a WOW worth seeing.

More details can be found at the official website for the Alcázar.