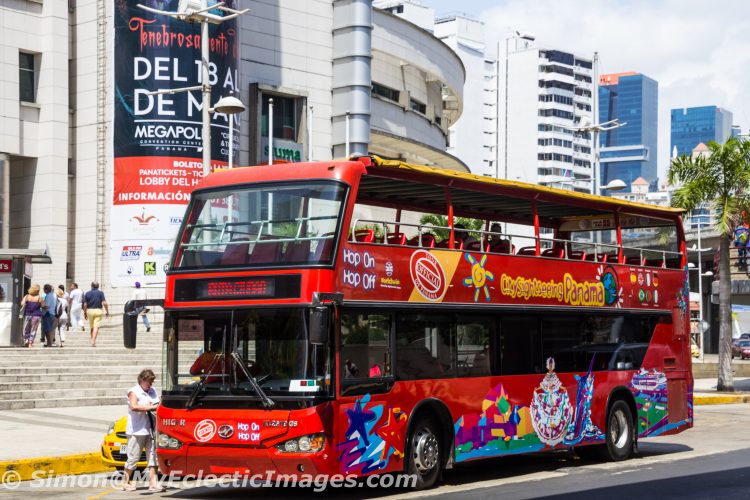 On-Again Off-Again is bad for Romance, But It’s a Great Way to See a City.

Two days in Panama City, and too many things we wanted to see; this was the dilemma facing Simon, Otto and me. Fortunately, City Sightseeing Tours offered a WOW of a solution through its Hop On – Hop Off Sightseeing Tour Bus.

Panama City (PC) is anything but compact., It sprawls in all directions, packed with incredible things to see and do. The problem? Many of PC’s WOWs are not within walking distance of each other.

Fortunately, it didn’t take us long to learn about the Hop On – Hop off buses. Armed with discount coupons from Hotel CentroAmericano, where we were staying, and self-satisfied smiles, we were on our way.

Before we could say, “too hot”, “too far” or “too complicated”, we were comfortably situated on the upper level of an open-top red double-decker bus. Enjoying the cooling breezes while watching PC life go by, we were on our way to our next must-see destination. It was as if the entire city lay spread out before us like a sumptuous buffet of outdoor and indoor attractions. We dined at our own pace, choosing only what interested us and, if we so desired, knew we could go back for seconds.

View from the Upper Deck of the Hop on – Hop off Bus (©simon@myeclecticimages.com)

As we rode along the Bay of Panama, with its magnificent view of the Pacific Ocean, we listened to descriptions and historical facts in English through headphones plugged into a clever device that offered the recorded spiel in several languages.

The bus stopped at several designated sites to let passengers on and off on its 90-minute journey. You can start your sightseeing adventure anywhere along the route, get off at your attraction of choice, then get on another bus to continue on. The buses run at regular one hour intervals, so if you miss one, you can always get the next. Or better yet, time your stays so you don’t have to wait at all.

A popular stop is Albrook Mall, where you can “shop until you drop” for trendy clothes, souvenirs, original crafts and bargains. Simon and I  opted to stay on the bus and saved our money, since admissions to attractions are not included in the ticket price.

Busker on the Streets of Panama City (©simon@myeclecticimages.com)

One, two and three-day passes can be purchased at numerous locations around PC. But check with your hotel first. You may find coupons that will give you a reduction in the fare. We opted for the two-day tickets, since that was all the time we had.

On the first day, we stayed on the bus, enjoying views of the Pacific, the Bridge of the Americas and a giant Panamanian flag flying proudly atop a hill. All the while, our headsets pumped relevant information on what we were seeing into our brains.

The Panamanian Flag on a Hill Top and Visible from Many Areas Within Panama City (©simon@myeclecticimages.com)

Our destination was what is considered to be the eighth wonder of the world, the Panama Canal. We spent about two hours at the Miraflores visitors center.  There we were able to watch vessels making their way through the Miraflores Locks on their way to the Pacific.

Freight Trains that Run from Panama City to Colon on the Caribbean Coast (©simon@myeclecticimages.com)

Then, it was a scenic ride along a causeway to Isla Flamenco for some down time. We strolled along the oceanfront lined with trendy shops and restaurants, and relaxed in the shade.

The next morning, we were once again on the big red bus. Our first stop was Casco Antiguo (Colonial City), a UNESCO World Heritage site and a must-see for anyone visiting PC.

The “Twisted Tower” Seen on the Way to Casco Antiguo (©simon@myeclecticimages.com)

In the afternoon, we left the bus to wander among the wealth of exhibits at the recently opened Bio Museum. Known as the “Bridge of Life,” the exhibits chronologically portray the rise of Panama from the oceans, to the nation that today links North and South America.

City Tours and other tour companies offer the Hop On-Hop Off style of sightseeing in cities around the globe. Although I am a walking tour kind of gal, when I want to see more than a concentrated area in a short span of time, nothing can beat spreading the WOWs over an entire city.

For ticket prices, schedules and a printable map, go to the City Tours website.