[Weekly WOW #051] Take a Ramble Down the Shambles in York: 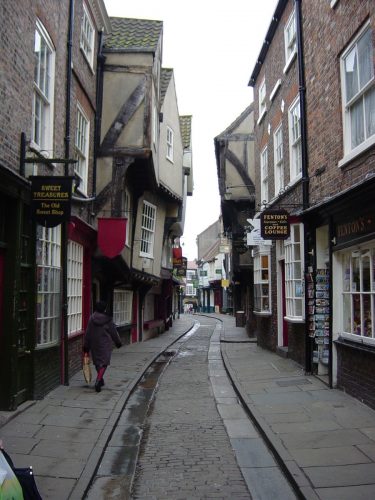 Europe’s Best Preserved Medieval Street Is Anything But a Mess. 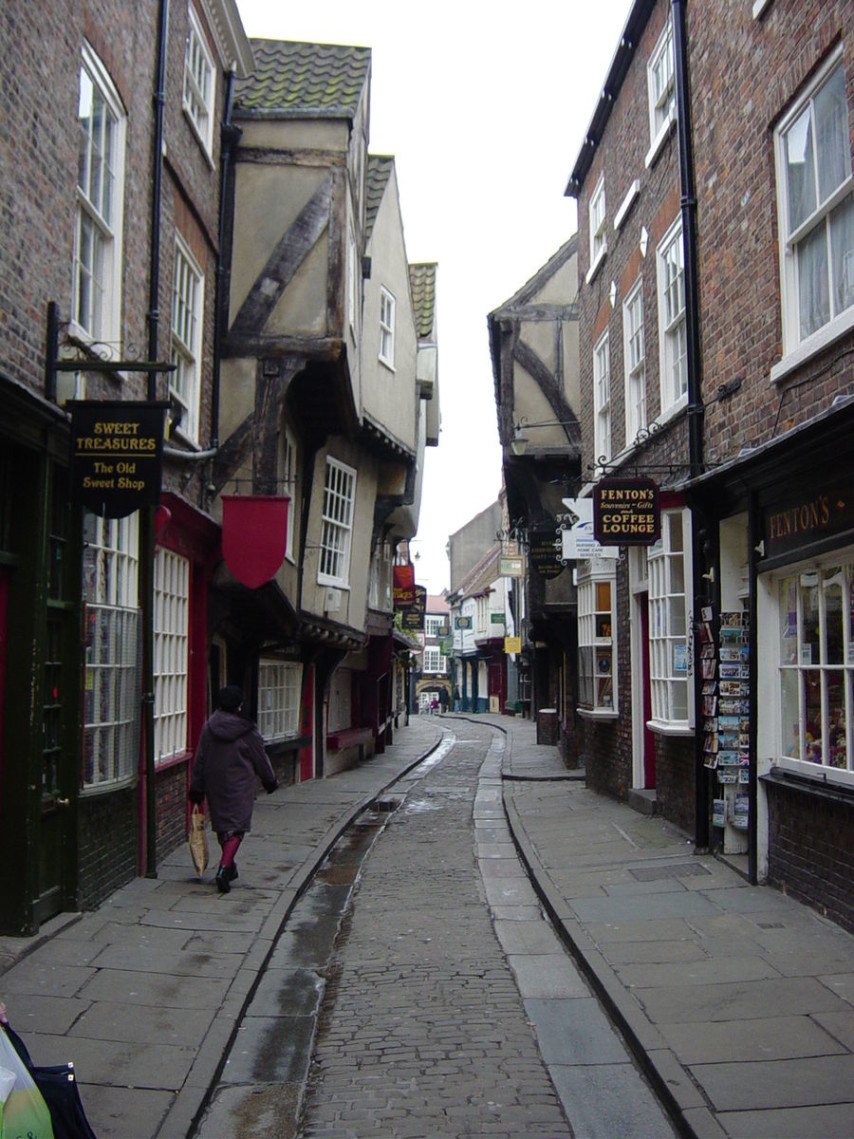 York (in the UK) is a city of history, mystery and unusual sights. One location that contains all three elements is the Shambles, a narrow cobbled street that evokes questions you probably would never ask anywhere else. Why do the buildings lean inward? What are the hooks doing outside a couple of the buildings? Why is there a trench running down the middle of the street? And why the name “Shambles”? When you learn the answers, the WOW level of this immaculately-preserved medieval lane will go through the roof.

It had been years since Simon and I took our first walking tour in the city that has become one of my favorite centers for historical exploration. So we put some of the limited time we had to good use via the leadership of an experienced volunteer guide.

Mentioned in the Doomsday Book of William the Conquerer in 1086, the street derives its name from the Anglo-Saxon word “fleshammels”, which means meat shelf. The wide ground floor window sills on some of the buildings were used by the butchers to display their wares. The ominous-looking hooks you see were used for nothing more sinister than hanging meat. And the wood frame buildings that almost touch each other from opposite sides of the street gave protection to man and meat from sunlight in an era when preservation techniques were primitive by today’s standards.

While you’re ogling the modern shops selling jewelry, antiques and, of course, souvenirs, it may at first be difficult to imagine the Shambles in its hay-day. However, when you take a closer look at the medieval structures that lean toward each other from opposite sides of the street; when you reach one of the points where you can reach your arms out and touch both sides simultaneously; when you look at the building tops and realize that the story of residents being able to reach out their windows and shake hands across the street below is more truth than fiction; you enter a time tunnel that takes you back 300 years.

It was a time when animals were housed behind the butcher shops, and slaughtered as needed. When a cattle market was established, in York, Shambles residents no longer had to deal with the noise and smell of their four-legged neighbors., But the backyard slaughterhouses were left intact, and the cattle were brought in from the market.

Considering the sanitation facilities and regulations we count on for food safety were non-existent, there were some obvious problems. Naturally, there was the smell. If you’ve been blessed with a vivid olfactory imagination, you may want to visit the Shambles at least an hour after lunch.

More serious, though, was the problem of how to get rid of the ongoing flow of human and animal waste.  To this end The street was raised on both sides to form a channel. Now, guts, blood and waste could run down The middle of the street, effectively turning it into an open gutter. Twice a week, butchers washed the mess away, and it was ready for the next onslaught.

It should come as no surprise that outbreaks of cholera were common. Fortunately, the situation had been permanently rectified by the early 20th century.

But the Shambles is not famous only for its butchery and probable debauchery. St. Margaret Clitherow, was a butcher’s wife, who defied Queen Elizabeth I and paid with her life. Visit her shrine at #35 and #36, rest your tired sight-seeing feet and contemplate the life of this courageous woman.

Born Margaret Middleton, she married John Clitherow, whose shop was located at #35. Both were Protestants, but Margaret decided to convert to Catholicism.

In these turbulent times, religion was treated like a ping-pong ball. Henry VIII was born into the Catholic Church, but left in a huff when Rome wouldn’t grant him a divorce from Catherine of Aragon. After his death, His daughter, “Bloody Mary” a devout Catholic, who lived up to her name by dining on roast chicken and red wine as she watched heretics burn from a tower window.

When Mary died, her half-sister, Elizabeth, ascended to the throne. Believing as her father had, Catholicism was once again a no-no. Since the people practiced what ever religion the current monarch decreed, torture and execution were the risks you took if you didn’t follow the bouncing ball. In other words, Margaret picked a lousy time to become a Catholic. 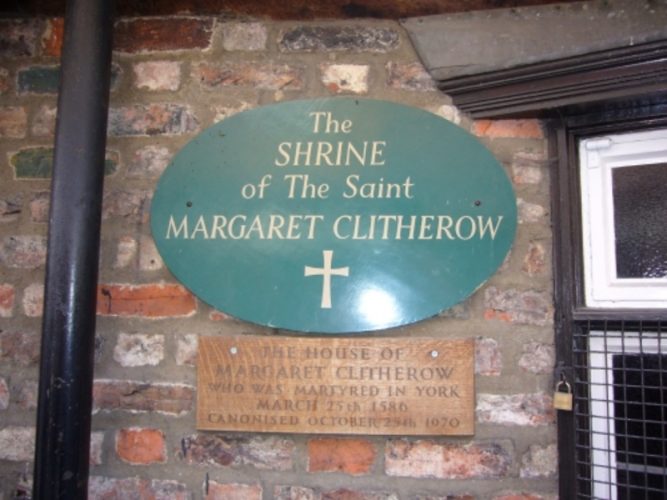 Not only did Margaret practice her forbidden religion, she taught children and hid priests. It was the confession of a frightened child that finally led to her arrest for not the first , but definitely the last, time. She was charged with providing sanctuary for priests and with the outrageous crime of practicing Catholicism. Although offered a trial, Margaret refused, insisting that she had no crime for which to answer, Margaret Clitherow was sentenced to death.

Among some of the more creative forms of execution was to crush the prisoner to death. Margaret was taken to the prison under Ouse bridge. Wearing a simple white linen shift, she was made to lie with a large stone in the small of her back. A heavy door was then placed on top of her, weighed dow by the addition of more large stones until the life had finally been crushed out of her.

Margaret Clitherow was canonized on October 25, 1970. If you like, you can visit her right hand in the Bar Convent museum.

The butcher shops are long gone, giving way to trendy establishments catering to visitors, as well as locals. . In fact, the Shambles is considered to be one of the premier shopping areas in York. It is one of the most visited streets in Europe, popular with tourists from all over the world. In 2010, the Google Street Team, based on an online vote, bestowed an award on the shambles as Britain’s Most Picturesque Street.

“The Shambles is that perfect blend of past and present. Time has transformed this street from a place of death and dismemberment to a popular tourist site, but despite all the modernization, this street proudly flaunts its fascinating history for the world to witness. No matter how many times I go back, the Shambles will always make me say, “WOW!

Learn more about the Shambles, as well  as the many other things there are to do  do in York, on the Visit York website.